I have here a C6220 9N44V with a single e5-2697V2 and 8gb rdimm as test ram.
Hard drive is some Maxtor 250gb I found lying around.
Built a custom water loop, and the fan controller can be seen with its lcd above the radiator fans. Left the heatsink for cpu socket 2 installed to protect the pins until I install a second processor.

Dead simple, strapped 12v to the power connector, jumped the fpconnecter and it started right up.
Going to reinstall the pcie riser so I can put in a low-profile card.

Funny thing, the bios has a setting for NT4 compatibility. I'm thinking about looking for a NT4 Sata driver just to see if I can actually install it.

Did anyone ever figure out the onboard SATA for these, is there some way to have them work without having to plug in a backplane (or other additional cards) or is it not possible?
S

Who can power up with this board? The posted schemas doesn’t work to my board. I always power up directly from psu, green cable to ground

The two pins left of the gap in the pin headers, short them.

yourepicfailure said:
The two pins left of the gap in the pin headers, short them.
View attachment 13398
Click to expand...

How must connect to psu? To ps_on cable?
V

Santiago Pineda said:
How must connect to psu? To ps_on cable?
Click to expand...

Your PSU seems already connected, cable on the left. With shorted pins as yourepicfailure suggest, does it boot?
V

Ensure whatever you strap to the pcie lanes has 12v backflow protection. What this means is that some cheaply made accessories allow 12v to flow back through the pcie connector, more common if they have an additional power connection on the card. If it doesn't, you will fry both pcie lanes if you strap it in, even if you used only one lane. I've killed two c6220ii boards with this when I was attempting to plug in HP's mxm gpu carrier board. If you need to use such an accessory, I'd recommend building a special riser cable with protection diodes over the +12v to prevent backflow from the card. Also, avoid riser cables that use a stabilizing capacitor. I've also killed a board with one of those.

And source for the 12v molex cable? I'm having trouble finding one.
Also, has anyone found a solution to make the mezzanine "useful" for other peripherals? I think I saw someone try but I can't seem to find the psot.
F

I use original risers with additional power supply with two 083N0 Dell C6220 II & 8220x boards. There were never any problems. I use GPU Tesla, GPU GTX 1070 and tire SSD Samsung 860 EVO for swap file. The original risers have all the protection you need. Cheap Chinese risers do not have them.
Y

Dell OEM riser. Conventional GPUs are fine. They have protection. It's just that certain PCIe addons (HP MXM carrier) do not as HP designed the protection in the expansion bay of the WS460.

Before I purchase, just to make sure this: 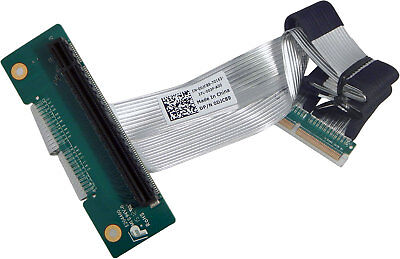 Is able to go into the mezzanine slot and turn it to a PCIe x16 (limited to x8 bandwidth)? I just need the additional lane for a non-rendering GPU for display acceleration. The main "work" cards are on the x16 lanes.
F

The riser on the link above is not for the side mezzanine slot, simply psi-e, but for the slot on the narrow side of the board next to the power connector.
I myself wanted to use the 8x mezzanine slot for raid and an external network card by connecting my device, but I could not find the pin assignment and the necessary connectors for it.
V

Yeah, mezzanine is kinda mysterious. I read here , or on other 6100 thread, that at least 3 versions of look-same adapter exists, and they are not compatible. My board stoped to boot with mezzanine installed (both sas and sfp) when i did some rough experiments, so I have two adapters with same pn but sadly can't test them. Will try to boot it with 6320 in future.
Reactions: Tha_14
F

I bought tools and made a power supply cable for + 12V risers for the GPU and for the board.


Now it is qualitative.

falanger said:
Good afternoon. Who knows why the power button may start flashing orange? The system turns on and boots.
Click to expand...

One of the options, overheating on the processors.
F

The orange button flashes when there is a power problem. Understated or overestimated voltage.
If the blue LED near the USB connector starts to pass by, it means that somewhere in the power supply plus and minus are mixed up, my additional power was mixed up on the board, but she survived it.

Here is a test run with a pair of Tesla K80

We are also seeking to connect a NVIDIA K80 to a C6220ii, and are following your helpful lead.

Question: I see on your monitor screen that your BIOS shows the option ["edge slot" <enabled>] under "PCI configuration". Was this "edge slot"- option visible already before you connected a GPU card, or did this option only become visible in the BIOS after you connected the GPU card to the edge slot?

If you could please let me know.


PS. For those interested I share the C6220ii Mobo block diagram, that Dell shared with me some years ago.