I did this today and it was fairly easy. I will check how the video came out.
N

FYI - I decided to pull the trigger on the "active" version, but bought it from AnteresPro because it came out to be $10 cheaper shipped.
COOLJAG BUF-A CoolJag BUF-A Core I Mobile, BUFA on AntaresPro.com $22 + shipping
N

RchGrav said:
Oh yeah... I knew that.. TBH I was just distracted with getting FreeNAS 10 installed and testing all the new features....

For now I did this..

Thanks for the temp info ... I get those temp with case top off and a Noctua sitting on the CPU heatsink.

I decided to pull the trigger on one.

Of course as soon as I did that I thought about add-in cards which will force me to convert to 2u anyhow.
<sigh>

Patrick said:
I did this today and it was fairly easy. I will check how the video came out.
Click to expand...

Summary: the passive Cooljag BUF-E offers a considerable improvement in heat transfer and cooling of the Xeon D over the supermicro (SM) passive 1u heat sink as delivered with these boards. The test was run system at idle and then PRIME95 program with a given workload, on each heat sink. It was not required to run a 100% workload, to indicate if the heat sink was an improvement.

The improvement was a reduction in fan speed and a 21 C drop in temp. Note the fan speed in plot below is the average of the 3 fans, there was basically a spread of +/- 100 rpm. Note: the goal was to not try and keep the cpu temp at ambient, that was a consequence of the test conditions.

Choose this cooler to test first because:

1. it has more space between fins, which requires less air pressure to cool effectively, and potentially lower power fans.
2. 2u not 1u
3. copper generally has a superior thermal conductivity than steel, however impurities and the elements in the alloys can significantly change thermal conductivity.
4. to change the coolers was easy, undo 4 screws, remove back plate and install new cooler and backplate
5. easily available at antares pro and frozencpu online retailers, then via shipito to Australia.
​
Thanks to Patrick for the heads up on removing the original heat sink. Ran it for 20 minutes, removed mounting screws, and twisted, it did not come easily..... The heat sink backplane was harder to remove as it was stuck to the motherboard, it required a screw to be installed and move from mounting hole to mounting hole, and several taps to loosen it.

Used a SM Xeon d-1518 in X10SDV-4c-7tp4f board in a SM cse-835 chassis with 3 of the 6 fans installed. ( back 2 fans and 1 chassis fan removed). The fans were set to optimal (lowest setting in the original bios), this provided a lowest spin of 2900-3000 rpm which was relatively quiet. The air baffle was in place and will accommodate 2U cooler, but probably not a 3U heat sink.

The only issue was the heat sink back plate on the cooljag had a thinner insulating layer, which required the placement of 4 fibre washer as often used in computer mounts, to provide the same standoff to stop the 4 mounting screws from bottoming out on the threaded section.

Now I have the original SM back plate, will look at some 3 or 4U heat sinks which require a very simple mod to drill 4 holes to mount them. Will try to get a photo of the 2 heat sinks side by side, but he data below provides a good representation..
BUF-ECooljag USA
Click to expand...

Here is a photo of the 2 heatsinks used to plot the charts above, side by side, note the original SM is cooler is sitting on sata connectors and other items, so it is higher than when on CPU.

Reactions: Bradford and Patrick
B

I needed active cooling on my SuperMicro Avoton platform and looked at many different options. I settled on the active version of their RPGA-988B HSF: SNK-C0054A4L

I'd be absolutely shocked if that heatsink didn't mount perfectly over this Xeon-D proc on their boards...

Sitting in the YouTube queue. Will publish it Monday.
N

brinox said:
I needed active cooling on my SuperMicro Avoton platform and looked at many different options. I settled on the active version of their RPGA-988B HSF: SNK-C0054A4L

I'd be absolutely shocked if that heatsink didn't mount perfectly over this Xeon-D proc on their boards...

I am just going to thank you now!
I suspect this will fit and I won't have to change out the back plate as the screws will likely match
the current OEM back plate screw holes.

I just ordered one.
Will report back once I get it.

After feedback from pgh5278 my original idea would not work for mounting a fan to the Cooljag BUF-E, so I'm proposing this:

This should slide right over the top of a Cooljag BUF-E. The dimensions extend out of the heatsink by 5mm the sides, and however far the fan does on the front/back. It uses three unique pieces (the assembly consists of a top, two sides, and two fronts) and designed to use a 60mm fan in either a push (front mount), pull (rear mount), or push-pull (front and rear mount). The only gotcha I have right now since I don't have a BUF-E and Cooljag does not provide a dimensioned drawing is if there is adequate space to allow for the M4 nuts on the back of the plate to secure the fan(s) to the front plates.

If someone wants to try it out, I can message the STL files.

Looks like I need a 3D printer.
Reactions: gigatexal

late to this thread, but while I am wishing I had one of these awesome boards, why not submerge yours in oil and cool it that way ;-)P
P

gigatexal said:
late to this thread, but while I am wishing I had one of these awesome boards, why not submerge yours in oil and cool it that way ;-)P
Click to expand...

I have a BNIB X10SDV-F-O if you want it. I may have a Mellanox card I can include with it. Customer decided they wanted 10GigE.
Reactions: gigatexal
P

Well kind of like what the above says a customer wanted a 10GigE setup so I pushed them onto a 5018D-FN4T. All I can say is the case fan is loud for an office environment. It's just high enough that is makes you go crazy due to the low hum. Anyone have any ideas on how to cool this thing better? I've thought about either moving the board to a 2U, installing an active 1U cooler like above with a Noctua exhaust fan, or moving them to a SM 721 chassis. Thoughts or suggestions welcome. I'd like to have a happier customer (they are already pretty happy).
P

Whats the best way to keep the mini-tower
version (e.g. SYS-5028D-TN4T) cool and quiet?Will 2U solutions fit in it?

And is the after-market SM active cooler mentioned in the article the same setup that comes installed on SM's boards with the active cooler?
Reactions: solaris12

@evancox10 the mini tower versions see that Noctua post on STH that's linked. It looks like the same cooler and SM doesn't make THAT many extra parts.

With the mini-tower you'd need to keep the 10gbase-t controller cool as well. There's a design flaw in that system. If you see the STH post they're mounting fans in front of the chassis too for this one.
N

Netwerkz101 said:
I am just going to thank you now!
I suspect this will fit and I won't have to change out the back plate as the screws will likely match
the current OEM back plate screw holes.

I just ordered one.
Will report back once I get it.

EDIT: I just saw a post/video on TinkerTry mentioning SNK-C0057A4L.
- Wondering what differences are...going find out the expensive way I guess
Click to expand...

And now I know the answer to my question:
1. Height differences - the SupermicroC0057A4L and CoolJag BUF-A are very similar = lowest profile
(Note: SM 54A4L has the same height profile as the stock heatsink that came with my X10SDV-TP8F)

I made a rookie mistake and mixed up the backplates, so I don't know what backplate came with what heatsink/fan combo.

Currently using the Supermicro SNK-C0057A4L ...
Used the included / pre-applied thermal paste.
Ambient temp is 79 degrees "F" in the mancave and my 1u case top is off.

I am running a single VM ...so pretty much idle and below are my sensor readings:

I am going to run it like it is ... well... putting top on...for a while and watch.
My non-scientific guess is I should mix components up to achieve the best all around cooling:
- example: Use the CoolJag copper heatsink and backplate with the Supermicro 4pin PWM fans

The Cooljag fan is a non-pwm running at 5500RPM and is "not quiet enough" to me.

The fans that come with the Supermicro heatsinks are Delta EFB0512HHA model that can get up to 6500RPM ...but since its PWM, it is hovering at the 3000RPM mark.

It is slightly audible, but quiet enough - again...case top is off and I can barely make it out .. like the 40mm Noctua that this replaced.

If one really wants to get quiet ..at the sacrifice of lower CFM look at the following spec sheet:
http://www.delta.com.tw/product/cp/dcfans/download/pdf/EFB/EFB50x50x10mm.pdf

And now I know the answer to my question:
1. Height differences - the SupermicroC0057A4L and CoolJag BUF-A are very similar = lowest profile
(Note: SM 54A4L has the same height profile as the stock heatsink that came with my X10SDV-TP8F)

One other difference is the height of the heatsink as it sits atop the processor. The 54A4L version looks to be fitted for a much shorter processor/socket combination, whereas the 57A4L looks like its designed with taller procs with IHS installed, and maybe less overall heat to dissipate.

These are excellent differences to know though, and I apologize for sending you on such a goose chase!

I put the BUF-A I got from antares into my little home server. I replaced the fanless aluminum heatsink on my new A1SRM-2758F. It's been on for the past 3 days nonstop and it's holding at 22 C. I had to use washers for the new backplate - I used some soft-ish rubber ones that seem to work pretty well. The backplate was kind of hard to get off because of the tape, but I didn't use a heat gun. I just eased it out with pressure. 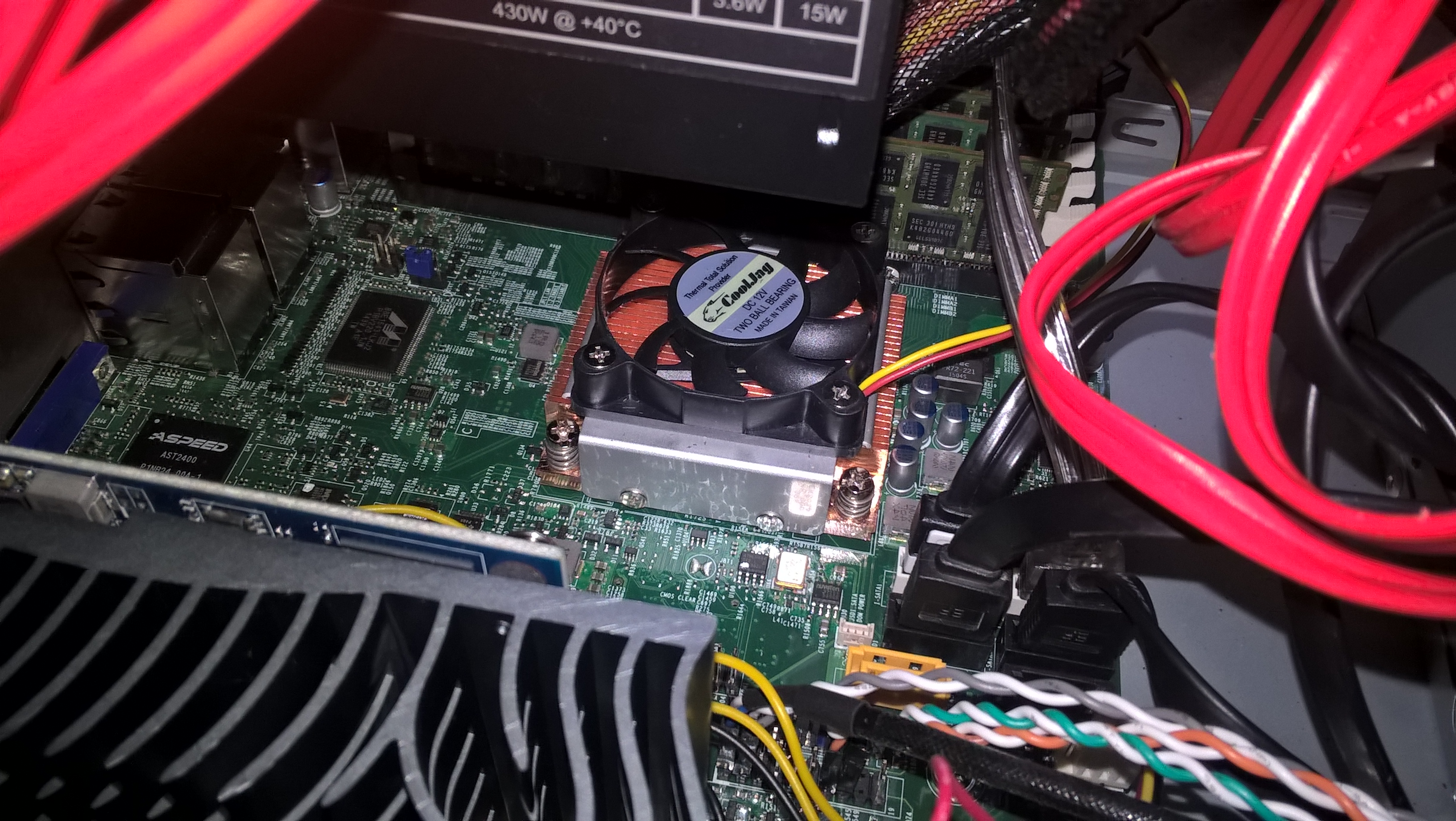