If I were to build 10 Xeon ES systems for number crunching what would be the best value? Only need 8 gb ram per cpu. Was wondering if a ddr4 system would be better value with such low ram requirements.
Last edited: Dec 3, 2018

Also seems to be one of the quanta boards with lga2011-3 and ddr3 memory banks. But it seems to have the ATX standard and is cheap compared to German prices at least. The description stated lga2011-3 before the price drop. So if anyone, with a QEY8, is interested maybe ask the seller if it has a 2011-3 socket.
Reactions: RageBone
L

Here is the proof of working QLNS Xeons on SuperMicro X11DPH-i motherboard: 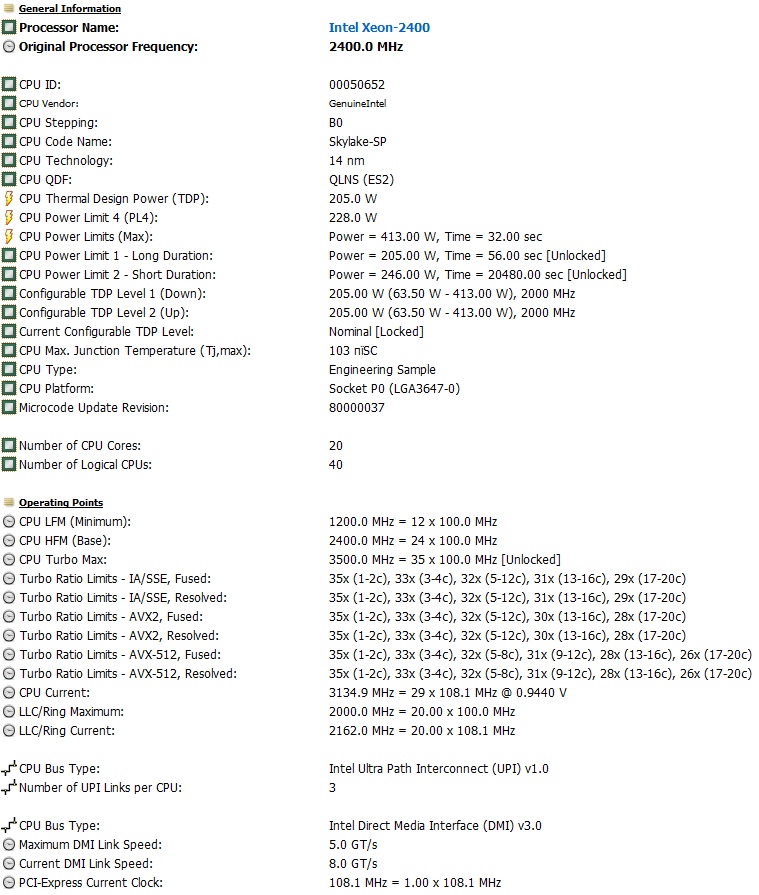 Bought from makimoo-uk on Ebay, he have some more, so who want the perfectly stable dual CPU workstation - you can use my advice. Remember, X11DPH is the only verified motherboard that can run these ES2 Xeons. ASUS will not work. Maybe GIGABYTE will do, but i don't have it to check. You may experience "Unknown device" in Device Manager/Processor, but this have no effect on CPU operation or performance. Be aware: NH-U14S DX-3647 coolers are a bit too big for X11DPH, use NH-U12S DX-3647 instead. Or go with water cooling.
Also, use 6 DIMMs per CPU, or memory configuration will revert to quad channel instead of six channel (i currently have 8x4GB on first CPU and 4x8GB on second, for a total of 64GB, planing to get 12x8GB in the future).
Reactions: BennyT and tesla100
O

i realized too late that U14S is too big for dph-i, was forced to bend heatsink a bit inside (~5mm) and mount both cpus together and also one of fans is oriented in opposite direction Btw what is the all cores turbo frequency on these es golds ? Did you run cinebench 15 on it ?
J

5482 in Cinebench for now, but my memory configuration is not optimal (4 channel instead of 6). Maximum turbo is 3,5 GHz vs. 3,7 on retail, but ES2 have higher fused TDP (205W, max. for the X11DPH) and have tendency to use higher frequencies. In multi-threaded apps it is always 2,9 GHz (except for AVX512 loads). As for coolers, i simply trimmed some conflicting ribs (had to set up one fan as outtake, but that is totally ok for me, temp difference is about 5-7 degrees, never had more than 63C in Obsidian 900D under heaviest load).
Reactions: Patriot and Oleh
J

Here is my solution for 14-series Noctua coolers: 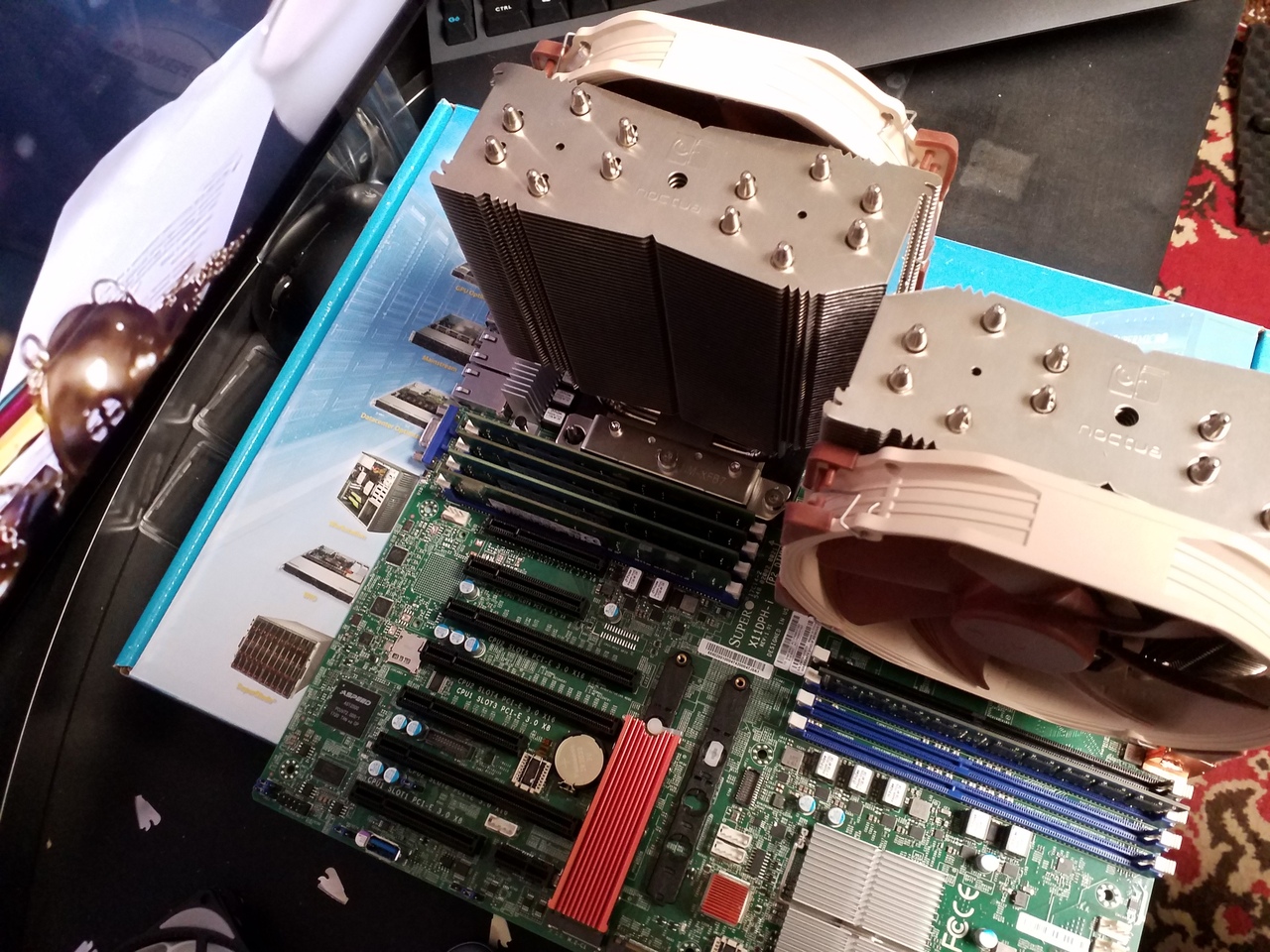 Maybe someone know, how to avoid "unknown device" in Device Manager/Processors? It is not affecting anything, but it's no beauty either. Also one of the PCI Express root ports is under Code 12, i think this is a port for ASPeed video and error caused by setting anything in BIOS from legacy to EFI.
Reactions: tesla100 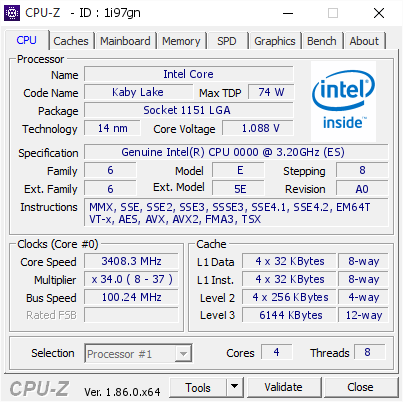 Regarding lga3647 coolers, I went with Noctua "NH-D9 DX-3647 4U". I have X11-DPI-NT, but the socket placement is same as the DPH board. The fans are alot smaller on the nh-d9 (92mm) compared to those on the NH-U14S, and the orientation with the D9 pushes the air toward the I/O panel.. just another option incase any looking for 3647 coolers. And of course there's the supermicro cooler solutions with smaller fan, if needing even lower profile.
Last edited: Jan 9, 2019
J

Does anyone have any information on this CPU?

LGA3647 Engineering samples looked nice so decided to give them a try, Xeon Gold 6138 ES QL1L paired with X11SPL-F (the motherboard came with the latest bios on arrival) and 64GB (8x8) DDR4 ECC REG 2133 in hex channel worked like a charm from the first try using a cheap Dynatron B5 cooling solution got fitted everything in a gaming ATX case and temps after two hours of prime95 are not exceeding 70C

@nero243 @scraper and everyone else looking at the Haswell EP QEY8 ES Cpus:

It looks to really be ddr3.
Obviously, no experience with it jet.
Last edited: Jan 9, 2019
Reactions: scraper
O

JustaViet said:
Does anyone have any information on this CPU?
Click to expand...

RageBone said:
@nero243 @scraper and everyone else looking at the Haswell EP QEY8 ES Cpus:

It looks to really be ddr3.
Obviously, no experience with it jet.
Click to expand...

Yup thats looks like DDR3 for sure. But i'm not interested in a QEY8 anymore, my Epyc is running strong

Haven't unlocked the OC options yet but allcore turbo works currently.
Heres what i got out of it:

Still headroom, i'm running in quadchannel, with timings all over the place and an ancient Agesa update.
Reactions: RageBone and Mihail
M

hi nero243, what is the motherboard and was it stress tested or something? looks nice

Mihail said:
hi nero243, what is the motherboard and was it stress tested or something? looks nice
Click to expand...

I'm using a Supermicro H11ssl-i, runs rocksolid like that. But i need a old Bios version or i'll get a instant crash under allcore load, might be a Agesa issue or a CPB issue with the ES. I have to do some more testing on that.
M

whats the single core score for your setup and thermals under load ? thanks

Mihail said:
whats the single core score for your setup and thermals under load ? thanks
Click to expand...

Unlocked software overclocking on windows today, the 2.9 GHz allcore turbo are not a limit anymore

Thermals are not an issue for me, i'm running custom loop watercooling with a 1080 radiator. Coretemp is reporting 27°C at idle and 56°C at prime 95 small ffts. I'd say you can add 10°C on these readings, doesn't seem realistic otherwise. VRMs are more of a problem, but i'm going to mill a waterblock when i have some more time.
Reactions: RageBone
M

this are excellent results for a cpu which cost a fraction of the retail product price , all core turbo and overclock availability is a huge bonus on top - i know that windows scheduler is a pain when it comes to so many cores keep it up i believe you can get more out of it
Show hidden low quality content
You must log in or register to reply here.
Share:
Facebook Twitter Reddit Pinterest Tumblr WhatsApp Email Link
Top Bottom