Do quiet high pressure fans for a home server exist?

I've got a full-length 4U server case, so I've got plenty of room to macgyver it and get any size of fans to work somehow, but I need to both create decent suction to pull air over my hot-swap bays and cool what will probably be a big passive AMD EPYC cooler. I can't seem to find anything to point me in the right direction on this.

UPDATE:
I should specify, I was thinking along the lines of extra thick fans, like many proprietary server fans are, to get the what I guess would be extra pressure, not necessarily flow.
Last edited: Apr 10, 2020

Quiet and high flow don't really go hand in hand. But the larger the fans and the larger the heatsinks you can fit will be the best bet. Stick w/ name brand fans and set lower fan curves in the bios if possible.
Reactions: Spocklogical
A

If money is no obstacle: Noctuas NF-A12x25 PWM has some of the best airflow-to-noise ratio available. But they cost around 30€ a piece, and only go up to 2000rpm
I

Supermicro chassis? If yes check the forums for the fans mod for 8x6 chassis with the fans from the 745 sq chassis.
Reactions: ramblinreck47
P

I can attest to the Deltas. In my hacked up 846 chassis' (with a Norco 120mm fan wall with 3x Delta 1212SHE fans) at the "Optimal" BIOS fan setting, the chassis is almost silent. And the HDDs (all 24x populated) stay at ~37C even at full tilt reading/writing.

That said, this setting was not good for passive CPU coolers, so I had to go to active, but CPU cooler fans make much less noise than midplane fans, so still very quiet.

p.s. I have a whole bunch of them left over (I bought 30 of them!!). These are literally new, not used. They ARE seriously heavy so shipping can be tricky, but I'll entertain reasonable offers.
N

@kapone can you provide more info on the fan wall mod for 846? The pics in @poto’s post for 846 look interesting. Not sure what the sheeting is though.
K

nthu9280 said:
@kapone can you provide more info on the fan wall mod for 846? The pics in @poto’s post for 846 look interesting. Not sure what the sheeting is though.
Click to expand...

The Norco fan wall spans the ENTIRE width of the case, so you lose the stock PSU/PDB. You need to come up with an alternative (I used HP PDBs and PSUs).

Other than that, there's minor Dremel work involved and drilling new holes in the chassis to screw into the fan wall. Once you try to put the fan wall into the chassis, it'll be fairly evident as to what needs to be done.
P

The photos are limited due to racking, but here is what I did:

The Delta fans idle around 1,000rpm, as drives are mostly spun down (unRaid OS). During a parity check, 18x7,200rpm HGST drives require fans to spin around 2,700rpm to keep temps < 40C. Parity checks are noisy, but only one night/month.

SC847
1 - same as above, stored original 80x38mm fan wall
2 - mounted 5 Delta fans on Norco RPC-4224 fan wall (only 2 on back side to allow for PDU)
3 - drilled mounting holes as needed on chassis sides & fastened to pre-threaded holes on fan wall. I used shoulder bolts to fasten, as the fan wall was a bit narrower than chassis sides & did not want to deform by warping sides inward.
4 - added PWM fan controller with temp probes (ebay ~$15)

I ended up bending a scrap piece of aluminum that I had. I drilled out the holes for the chassis mounting screws and the fans. I used 120mm Noctuas. I'm pretty happy with the way it turned out. I'm going to do another Supermicro 4U server in the next couple weeks but I was thinking about 3D printing the fan wall this time. 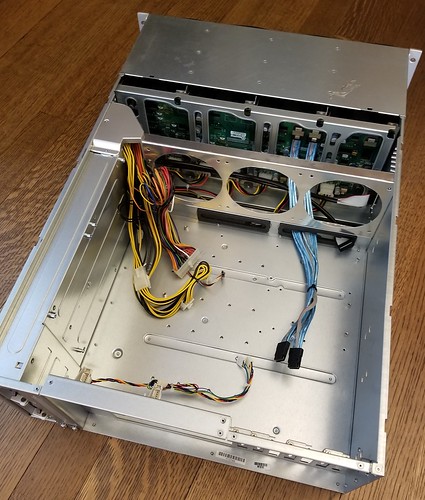 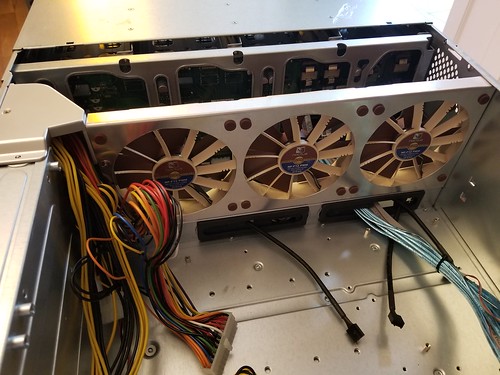 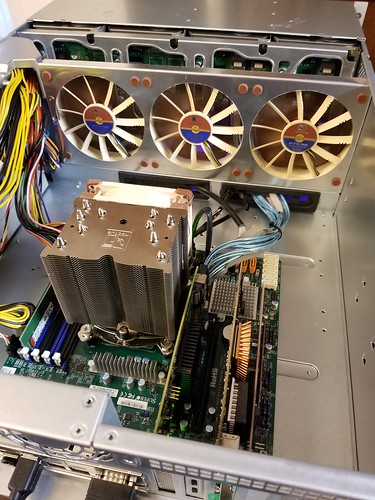 If you need higher RPM Noctua fans, I'm running a NF-F12PWM-iPPC3000 in my Dell PowerEdge T430 server chassis since its basically a straight replacement. They make a 2000rpm and 3000rpm option with PWM:

ARAMP1 said:
I ended up bending a scrap piece of aluminum that I had.
Click to expand...

That looks super clean. If you didn't use an industrial bending brake to get that nice bend, please share your technique!

I have similar box. It is 486 chassie. Older one. When I was running oem PSU I just ziptied 3x 120mm fans together and sandwiched then between 2 ps of wire mesh. A hack but worked well.
No took out the PSU and shoehorned a 1500w atx in there and replaced 120mm with 140mm fans. Works nice a quiet.
S

Wow, that's a lot of good input.
@ARAMP1 what sort of airflow were you getting?

I don't think I mentioned it originally, the reason I'm worried about getting bigger fans is that I haven't been able to find any active Epic Rome coolers that will let me orient it's fan in the correct direction for the motherboards I'm looking at. Which I guess is the problem I should have addressed instead. lol.
T

Supermicro makes two active heatsinks for Epyc that blow the exhaust air towards the back of the case (and not upwards towards PSU area). I have the 4U version and it works great: SNK-P0064AP4

Search for H11 boards at this link:
Heatsink Matrix | Supermicro
Reactions: Spocklogical
A

Markess said:
That looks super clean. If you didn't use an industrial bending brake to get that nice bend, please share your technique!
Click to expand...

I did have a Harbor Freight brake that I used. I had this one for other projects, but they make benchtop ones that are under $50.


Spocklogical said:
Wow, that's a lot of good input.
@ARAMP1 what sort of airflow were you getting?
Click to expand...

I'm not really sure about the amount of airflow. I've taped off the backs of the empty drive cages (I think I have about 9 or 10 empties). This case is replacing a Rosewill case that I put 3 IStarUSA hotswap cages in. 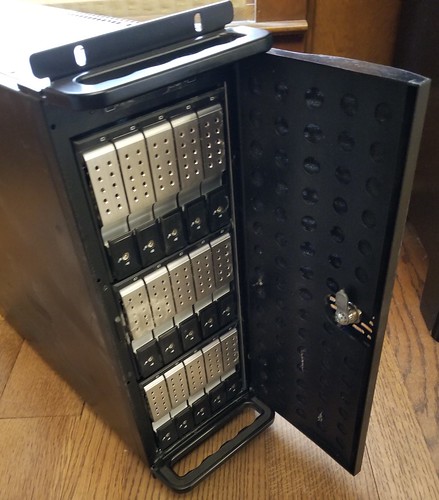 I always had a couple drives that would run over 40C in that setup. Now, all the temps are about the same, maybe 1-2 degrees cooler but none that are over 40C.
Reactions: ramblinreck47 and Markess
Show hidden low quality content
You must log in or register to reply here.
Share:
Facebook Twitter Reddit Pinterest Tumblr WhatsApp Email Link
Top Bottom