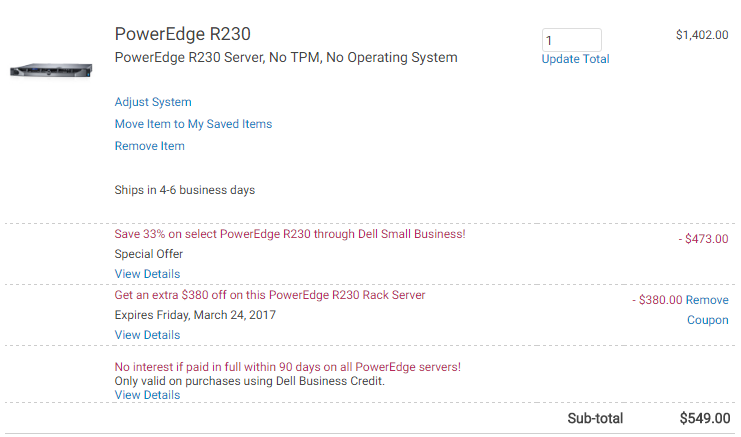 Just wait for Dell to email you after paying and rejecting the order.
Reactions: Kneelbeforezod
K

Switch to this option and save another $165:
Chassis with up to 2, 3.5” Cabled Hard Drives and Embedded SATA [Included in Price]

I ordered one yesterday - approved.

Hate you both, just purchased the 384 one for a little ESX box for my network lab

i dont need any more servers but for those still looking at this deal, ebates has 10% cash back for dell small business as well.

Just how loud are these systems? I'm in the market for a couple of boxes for my new homelab.
X

Summary $384 as kiteboarder said above, that is 2 drives chassis. You can also get 4 drive chassis for $450 it appears, select the 4 drive cabled and embedded chassis option. See below.

Nice find kiteboarder. To get to $384 you either have to start at OPs link or from the R230 landing page you have to start with the 3rd system that an original price of $1402/$929. Then change to the 2 drive SATA embedded chassis and then apply the coupon. I played around with starting at other configurations bases to see if I could get a similar deal or better deal with the 4 drive chassis or more ram/processor but it turns out the coupon is quite restricted and you cannot get the required parameters for the coupon to work so the $384 appears to be the best you on the 2 drive chassis. If you want the 4 drive chassis it is $450.oo for me selecting the 4 drive cabled and embedded sata. Which is still quite good and probably worth it for going to 4 drives. There does not appear to be any possibility of getting to a highly discounted E3-1230v5 with 4c/8T because the coupon is specific to the 1220 model processor.
A

Dell does not honor cards that are issued outside US.

Very tempting. If it only supported more than 64gb of ram
T

I just ordered the 2 drive chassis with the E3-1230V5 4C/8T for $437 with the coupon (it was a $53 upgrade). I just went back and adjusted my system. I also opted for the free iDrac 8 with dedicated NIC. Used Ebates and got another 10% back and 3% in Dell rewards
Reactions: Patrick

Opted for the E3 -1240 V5 with 4 drive embedded SATA. Also added the rails as they were cheaper than anything I could find on ebay. Came to $590 with taxes. Thought about the 2 drive chassis but decided it was worth the extra 2 drives and went for the 4 drive version.

I would have spent around the same if I had built a similarly spec'ed system. Guaranteed I would have had more flexibility. But with a complete teardown of my windows based lab and moving to VMWare, this server will definitely save me a lot of time (which I cant seem to find enough of) in sourcing the parts separately and building it.

Thanks @odditory for the post.
Reactions: T_Minus and odditory
P

Following OPs link and making no config changes, coupon still applied just now and shows $549. I could not however get it down to $384 as before because the chassis options have changed and they removed the one that before had "embedded sata" in description that when chosen previously got it to $384. They probably never intended it to get that low and did not realize it could with the complexity of their ordering system and only figured it after someone audited why they were selling new v5 system under $400 haha. A boss somewhere at Dell isn't happy is my guess.
P

Stinks since I had it in my cart this am and didn't check out.
N

Just received the 384 build - it was a bit louder then I liked (Fans were stuck at 52% idle) though figured out the settings to quiet the darn thing down.

BIOS under System Profiles make sure its set to Performance per Watt (or something along those lines) then under IDRAC Settings change to the following:

Those settings get the fans to 22% (3720 RPM) and its nearly silent at that speed. This is with the lowest CPU they offered, E3-1220v5, when doing some quick loadtests in centos the temperatures appear to idle at 32C and max out (after 20 minutes of burning) at 68C. Not sure what temperature the CPU needs to be before the fans automatically kick up - but hope this helps others poking at this box

In hindsight wish I went with the e3-1230v5 for the HT, wonder if there is a way I can get that swapped though DELL. Something tells me no since they killed the way to get that price. May just ebay the current 1220 and replace with a 1230, price appears to be similar

I may use this for pfsense and convert the d1518 to an esx box for simple labing instead (due to core count), thoughts?
Last edited: Mar 22, 2017

1. What caddy should I use to add a 2.5 inch SSD to the cabled version of this chassis?

2. I got the iDRAC8 with dedicated Nic. Can I just buy an enterprise license and apply it to get Remote KVM? Or do I need to get a different iDRAC8 card also?
S

Cant speak to #1, you may just need a 3.5 -> 2.5 converter like this. (I am not sure this one will work for the chassis but its an example). You should not need to purchase a new caddy, here is what mine looks like some of the pictures below. 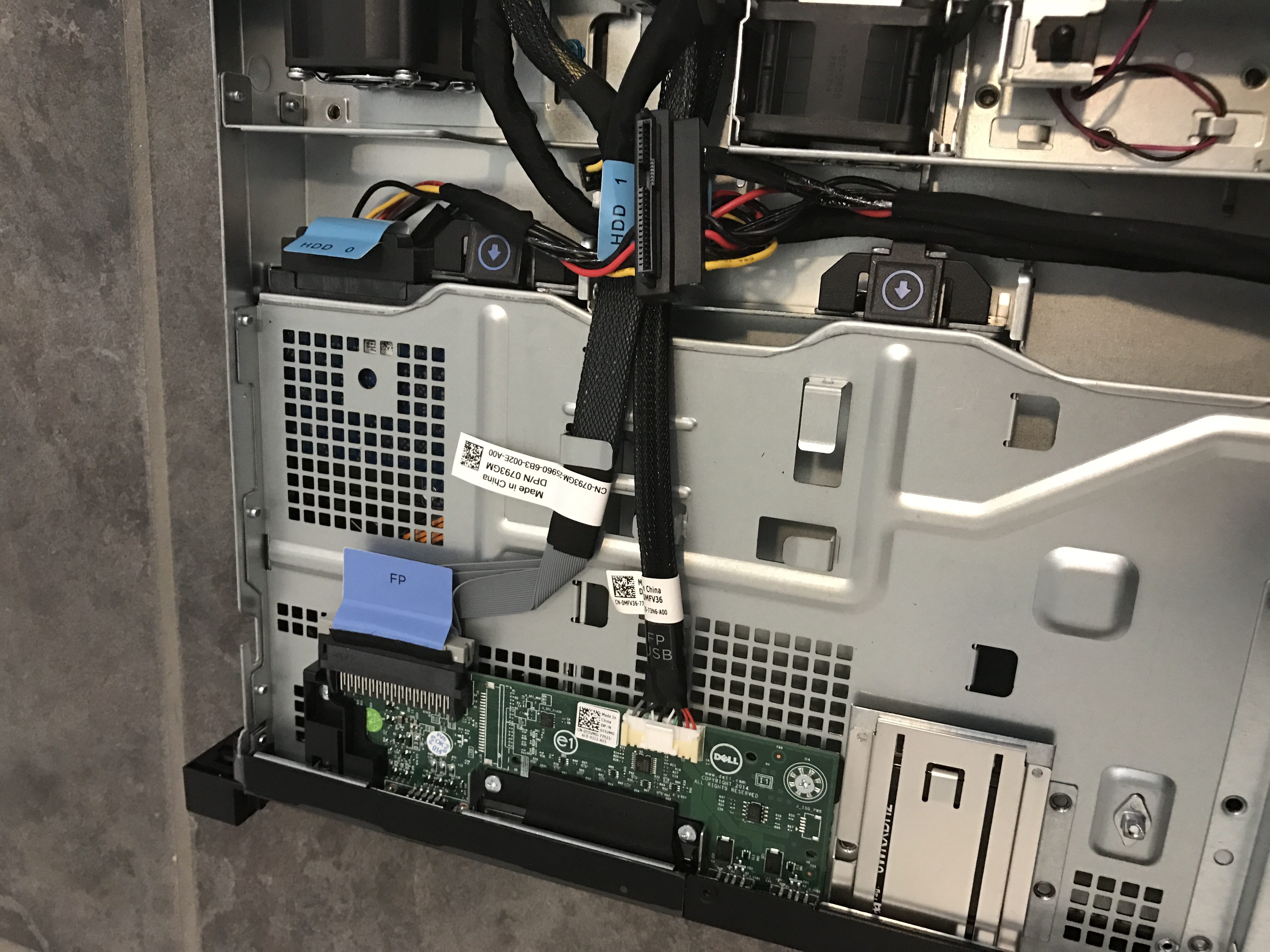 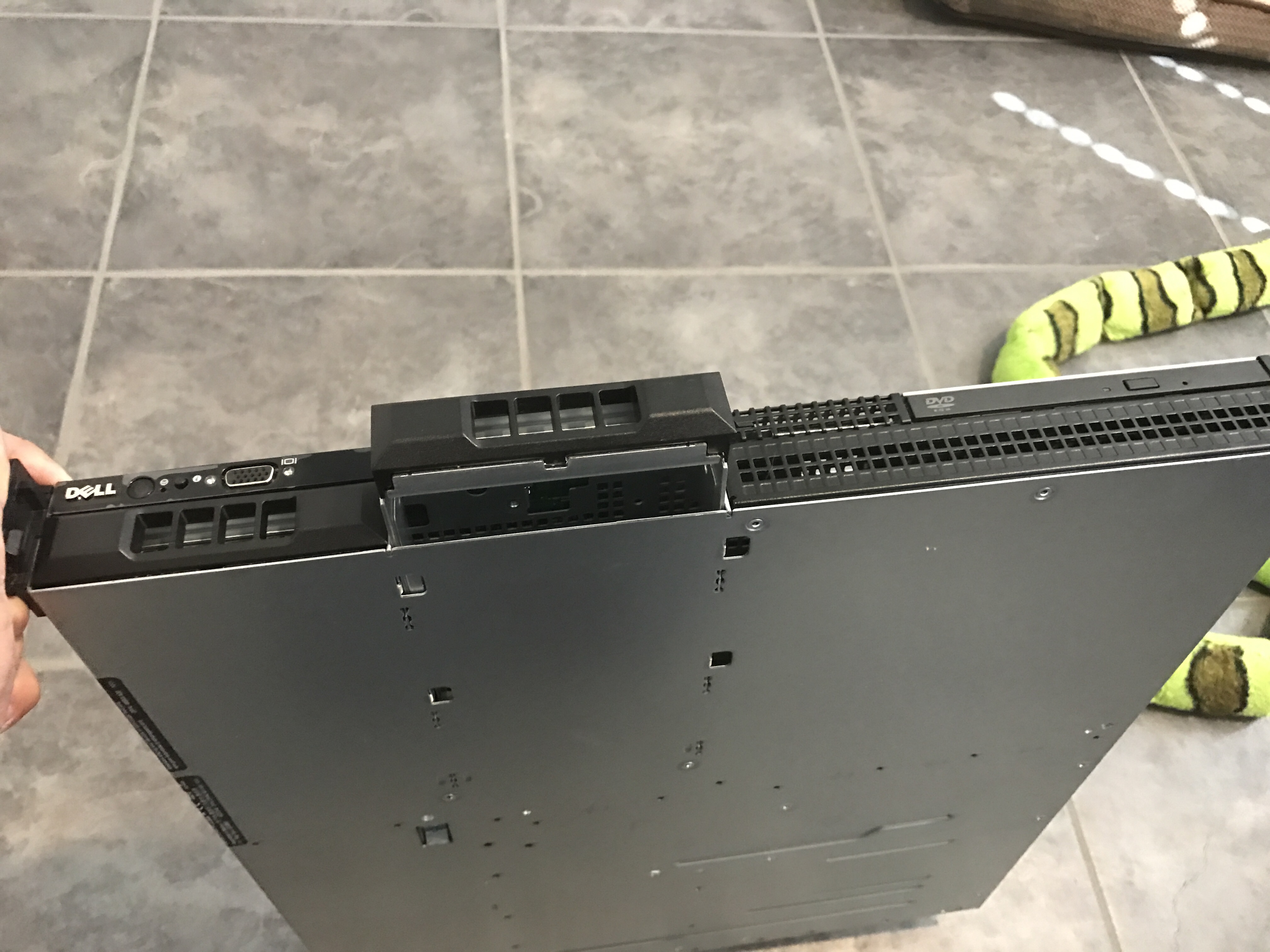 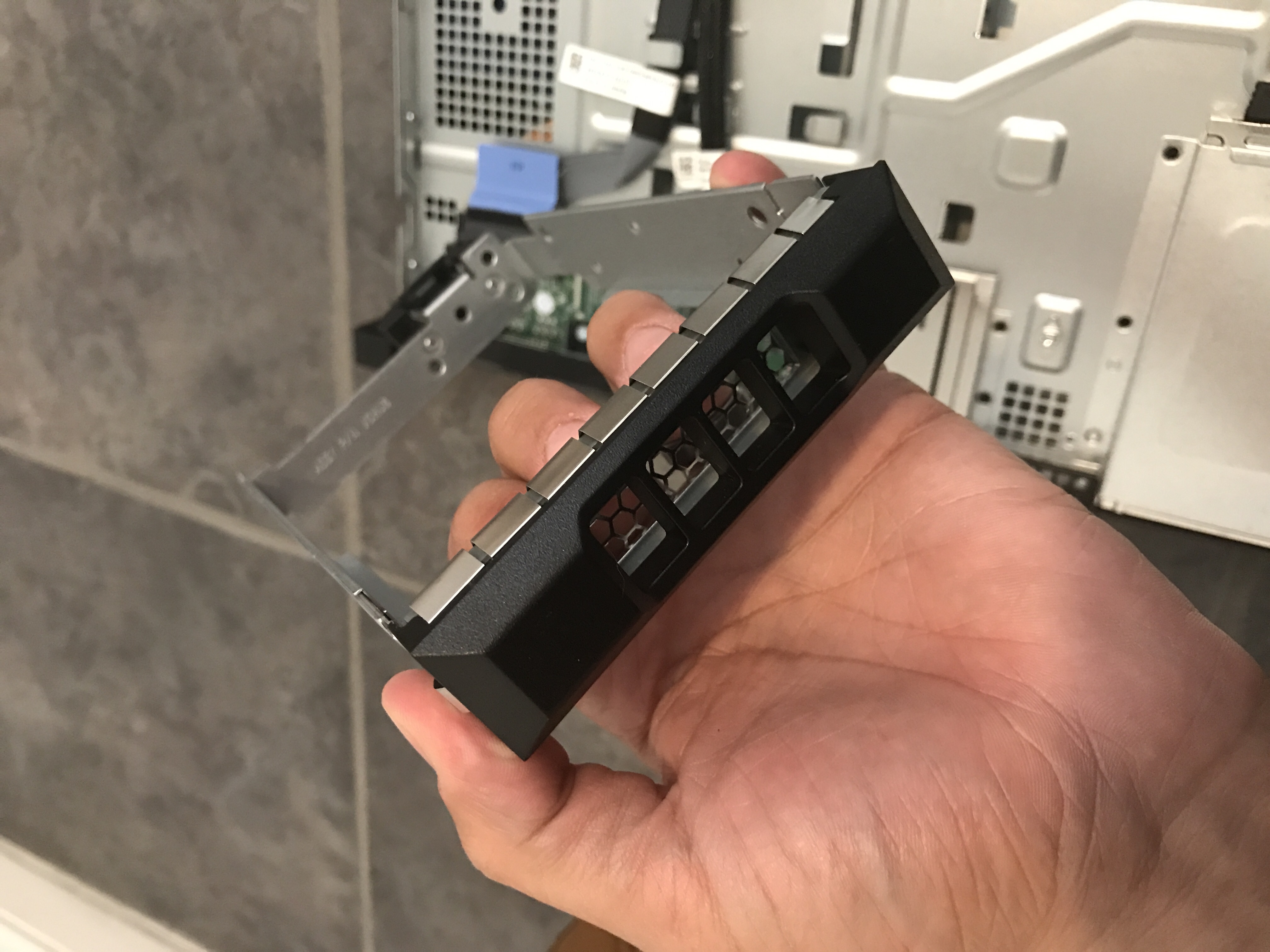 2. Yes, I loaded up a trial license for the same Drac setup to get KVM going. At the end of this article there is a download link to a 30 day trial. How much does one of those actually cost?

scline said:
Cant speak to #1, you may just need a 3.5 -> 2.5 converter like this. (I am not sure this one will work for the chassis but its an example). You should not need to purchase a new caddy, here is what mine looks like some of the pictures below.
Click to expand...

Thanks. This is what I was looking for.


scline said:
2. Yes, I loaded up a trial license for the same Drac setup to get KVM going. At the end of this article there is a download link to a 30 day trial. How much does one of those actually cost?
Click to expand...