EffrafaxOfWug said:
I'm using the TP-LINK T1700G-28TQ myself although it's not had any patches for a while and might be considered as old-hat. One alternative I did consider was a badge-engineered fs.com switch, the S3900-48T4S or S3900-24T4S (fanless), although I believe they got in trouble for spamming threads.

As far as the T1700G-28TQ goes, I've been very happy with it. I did install the 180206 beta firmware to fix a memory leak present in the 170608 production firmware and it's been running sold ever since; there's also a 190108 firmware for the v3 switch (only available on the australian site for whatever reason, spotted by a fellow StHer) that reportedly runs just fine on the v2 but I've not tried using it myself yet.
Click to expand...

Great info, thanks a lot! I also had the fs.com in mind and forgot to mention but I am a bit concerned since it is probably a low volume product and might not be that thought out. I don't know, that might just be in my head.

I was of the same opinion myself - had never heard of them making switches before and found precious little trustworthy info about them whereas there was both a thread here detailing people's experiences with the TP-Link and I was also able to borrow one from a colleague.

My only concern really is the relatively antiquated firmware - although from the looks of things it was already wearing mothballs when it was new. For example, it doesn't support TLSv1.1 or 1.2 and only offers DH SHA1 KEX for ssh, requiring local workarounds for most ssh clients. Apparently this is quite common in network kit though (my preceding netgear switch had similar issues).
Reactions: rootpeer
I

Im running the v3 firmware without problems (in "dumb switch" mode though) with my T1700G-28TQ v1.
R

rootpeer said:
Looking for a cheap, managed, L2, > 12 RJ45 ports and 4 SFP+ 10Gb ports fanless or very very quiet switch to replace my CSS326 since I need one or two more SFP connections.

Even cheaper is the Aruba 1930 series. Also 24 and 48 ports models with 4x SFP+, web managed only no cli by App or browser and also no fan.
R

rootpeer said:
Looking for a cheap, managed, L2, > 12 RJ45 ports and 4 SFP+ 10Gb ports fanless or very very quiet switch to replace my CSS326 since I need one or two more SFP connections.

I'm also looking for a switch with 1GbE ports and 4 SFP+ ports to go with my Zyxel XS1939-10. I thought of the Cisco SG350x-24 but from its fan can get loud. I'm not familiar with Cisco's Catalyst 2960-L series, but they seem interesting:

EDIT: these switches aren't exactly cheap, but there may be deals to be had online.

Even this line's POE switches are fanless, so that would allow me to get rid of 2 other POE switches (which I bought years ago since each POE is only 8 ports and finless). Anyone have some thoughts on the Catalyst 2960-L line?
P

The outdoor variant is the netPower Lite 7R, also announced today, at 129$.
Click to expand...

Too bad it doesn't have 2.5GbE ports instead of 1GbE, otherwise this would have been a near instabuy for me.
Reactions: BackupProphet
S

Well since they discontinued the CRS210-8G-2S+ (I have this) it was about time for a replacement.
P

saivert said:
Well since they discontinued the CRS210-8G-2S+ (I have this) it was about time for a replacement.
Click to expand...

anyone with good or bad experience with the switch?
M

Anyone have the N1124P-ON that can comment on the idle power use without any POE active?

Anyone found a small budget priced desktop/fanless switch with Nbase-t ports and a few 10g ones?

Something like the Qnap QSW-M2116P-2T2S , but unmanaged and cheaper 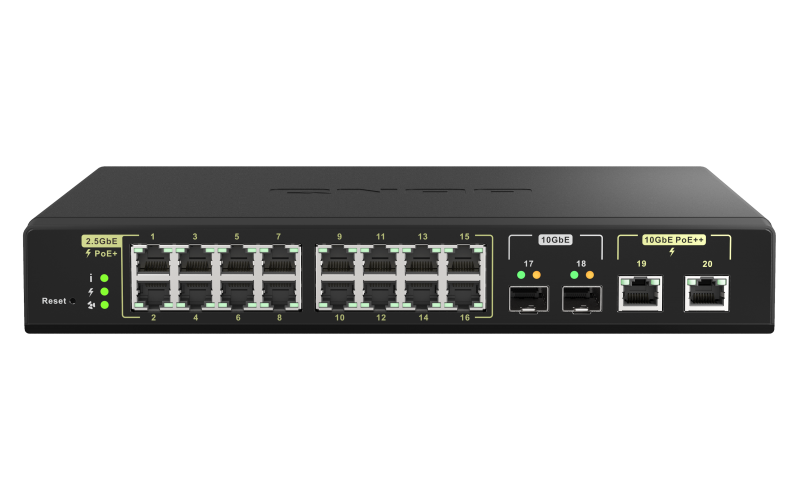