So here's what I've gathered so far

I haven't seen any exact release dates yet but I'm figuring the first half of October given I'm seeing ship dates for some skylake Supermicro boards shipping has a 6-week lead time.

On the chipset side I'm hearing of the the C230 series chipset with emphasis on DDR4 memory but we may see some with DDR3L slots. Max of 20 PCIe 3.0 channels, 8-port 6Gb/s SATA, USB 3.0, Sunrise Point for SATA Express. On-board network will vary between the I219LM (AMT support) or the I219V (no AMT).

Anyone (outside of NDA) hear anything else for the upcoming line?

AKA Skylake desktop with ECC support and modest performance improvements over predecessor. #5thgen

I wonder how they will fare against the D-1540 based boards?

I wonder how they will fare against the D-1540 based boards?
Click to expand...

Higher base clock frequency and better GPU. Will be an interesting mix where these may play vs the D-1540 and D-1520 for the performance/value proposition.
P

Will deff be interesting to see, E3 V5 will be one generation newer for architecture vs xeon-d and have higher clocks, though less cores than the 1540.

Also the Xeon-D will most likely have a lot more PCIE lanes direct to the CPU (32 lanes vs 16 if same as desktop chips) so might just come down to what tasks you are trying to do and how much IO you need as the DMI link to the chipset could potentially end up being a bottleneck on the E3. The DMI link on the current skylake desktop chips is only the equivalent of 4x PCIE 3.0 lanes
A

Somewhat related tidbit: For whatever reason intel exposes 4 more cpu pci-e lanes on the E3 12x5 xeons when used with C2x6 chipsets, though its up to the motherboard OEM to implement it. On Ivy they were still only 2.0 versus the sixteen 3.0 lanes, not sure about haswell but would be nice if skylake finally makes these 3.0 as well.

This was pretty handy for some C216-based ZFS builds (Asus P8C) I did with dual LSI controllers eating x8 each and a quad or 10Gb nic using the "extra" x4. And no, the extra lanes definitely do not come from the PCH, the SSDs were abusing that bandwidth. (and info buried deep in intel docs will back it up)

They are still made from the same die as their desktop counterparts, but I believe they somehow (firmware?) remap one of the digital video outs for general use instead. At a low level the GPU outs are each x4 ports anyways.
Reactions: lmk

Here's what I'm finding for the initial models to be released this year.

Any interest into doing a main site post with what you have found on the V5's?
Reactions: gigatexal 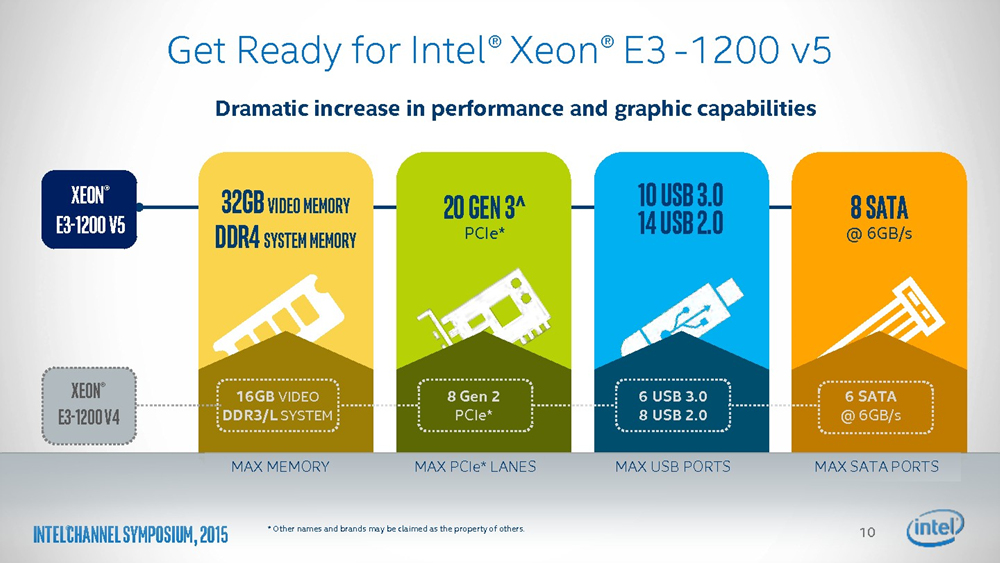 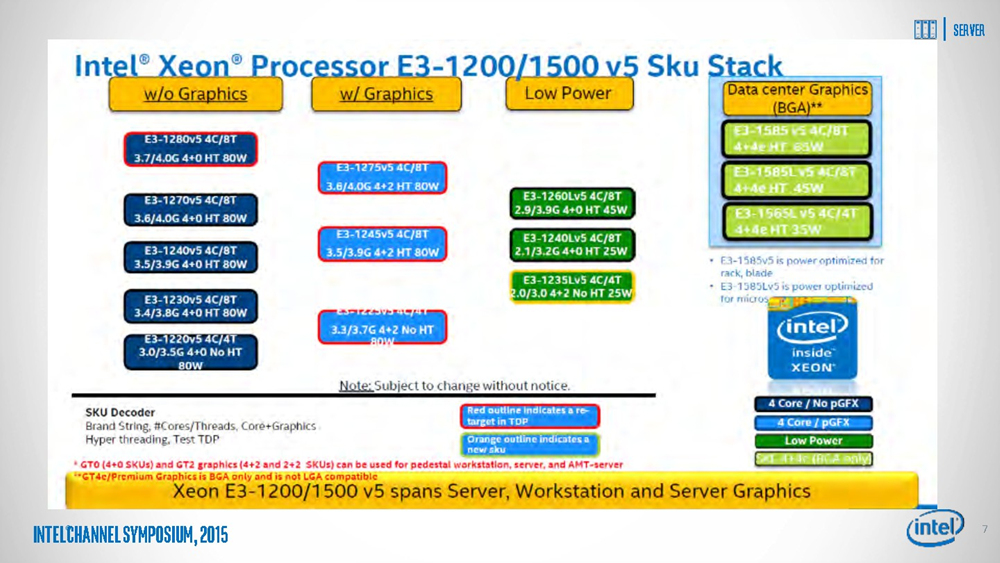 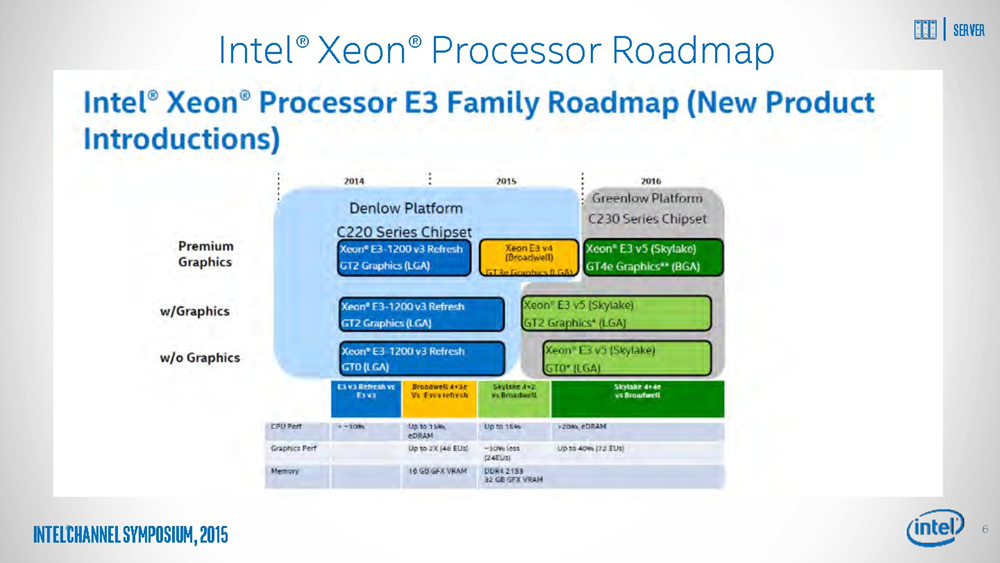 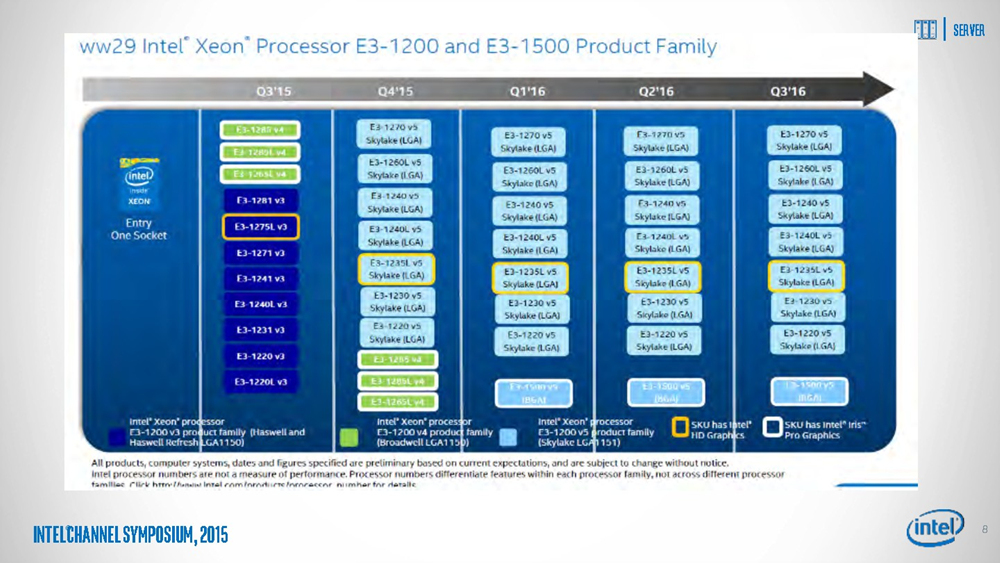 the D-15xx chips support more ram and use less power, I'd go that route if I had money for it. and with the D1540 you get 16 threads which just blows my mind.
Reactions: jahsoul, iriscloud and T_Minus
S

I refuse to get xeon-D until they give me sfp+ with it. I could maybe take one without any 10gb at all (if it was cheaper), if they would give me 10+ sata ports.
H

Either Xeon D or Xeon E3 v5 will be sufficient for an ESXi home lab. What's tough is to find an ATX server board with IPMI and enough x16 and x8 PCIe slots for passing through to VMs using vt-d.
W

Any more info on when these are going to be released?