I just posted in Chassis and Enclosures - I was going to attach some files to illustrate my question. I'm getting a quite unhelpful error:

The following error occurred
There was a problem uploading your file.

Just me? Not permitted in that forum? Firefox x64 problem? Hints welcome.

we can upload files?

Diavuno said:
we can upload files?
Click to expand...

It is possible to attach items to a thread or comment. There's a button "Upload a File" between the "Reply to Thread" and "Preview..." buttons (below the comment reply box).

DavidRa said:
It is possible to attach items to a thread or comment. There's a button "Upload a File" between the "Reply to Thread" and "Preview..." buttons (below the comment reply box).
Click to expand...

I don't see that option .... must be a configuration setting ? 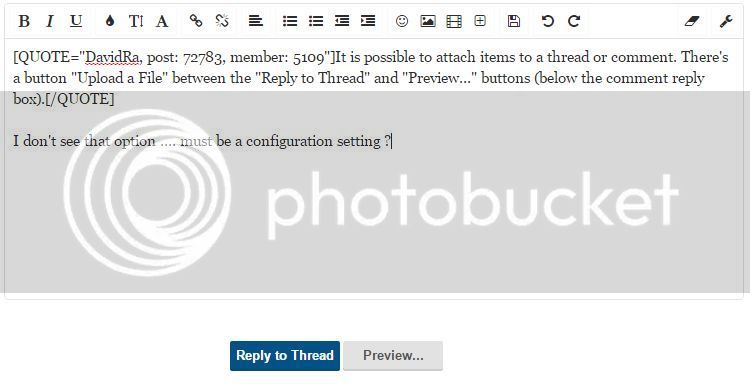 britinpdx said:
I don't see that option .... must be a configuration setting ?
Click to expand...

Speaking of attachments, this came this morning on a forum notification e-mail.

I suspect that may be caused by the STH forum links being sent from "mandrillapp.com" - that site was continually flagged by my anti-spam as a malware distribution site for a while ("MailScanner has detected definite fraud in the website at "mandrillapp.com". Do not trust this website:"), and the forum update emails seem "spammy" because the URL for the site is hidden behind the text (consider a link that says "Click here for PayPal" where the link is http://paypal.com.site.login.php.chineseisp.cn/). Mandrill appears to be a fairly legitimate paid bulk mailer service, so I don't doubt that it is occasionally subverted - and in other emails I have (e.g. from LinkedIn) there are definitely web bugs and click tracking links.

Edit: I should clarify that LinkedIn sends emails (at least sometimes!) via Mandrill - which have had web bugs. I do not see the same in STH emails - but it's the aggregate behaviour of Mandrill customers that impact on legitimate Mandrill emails from STH.
Last edited: Jan 10, 2016

Yea it is a Mandrill issue but it is a super nice application and priced nicely.

Here is the dashboard: