This is basically a continuation of this thread, "Haswell vs Avoton for Mini-ITX NAS?". My goal was overall physical downsizing, and this is one piece in a bigger project. I took a lot of inspiration from this thread, "Nitro's - Condo=Home Data Center Replacement".

The old system was built into a SuperMicro SC836A-R1200B. No complaints with this case, other than the size. At the time I bought it, I thought I'd be forever growing my storage capacity... but I realized I don't need ridiculous amounts of storage, and can do what I need with six 3TB drives. So the case became serious overkill. Original CPU was an E3-1230 (v1/Sandy Bridge) and motherboard was a Supermicro X9SCF+-L. The board and CPU were great, but I had to replace them in the move to mini-ITX.

The use of the U-NAS NSC-800 chassis dictated the use of a mini-ITX motherboard. As per the Haswell vs Avoton thread I started, that ASRock C2750D4I motherboard looked perfect for my needs, but issues with the built-in Marvell SATA chipset scared me away. That left me looking for (1) a mini-ITX motherboard that (2) supported ECC memory and (3) had IPMI including IP-KVM. As far as I can tell, the ASRock E3C22xD4I boards are two of the very few that meet this criteria.

The obligatory shot of all the new gear still in packaging. Note that I recycled an IBM M1015 HBA, memory, 2x OS SSDs, and 3.5 data drives from the old system. 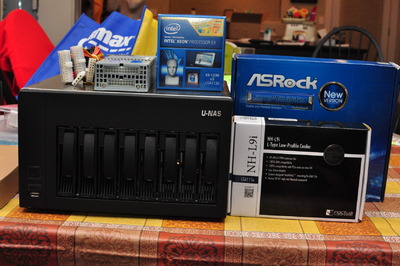 A few shots with just the motherboard mounted in the chassis. The official amount of clearance in this chassis is 47mm. I measured that myself, but confirmed it via email with U-NAS. The height of the Noctua NH-L9i with fan is advertised as 37mm. As you can see from the pics, there is very little room left over. And in fact, I don't think you'd want your fan to butt right up against the chassis anyway. The fan needs some empty space from which to draw air. My point is, unless you have a passive heat sink (e.g. ASRock C2750D4I), I wouldn't go any taller than the Noctua. 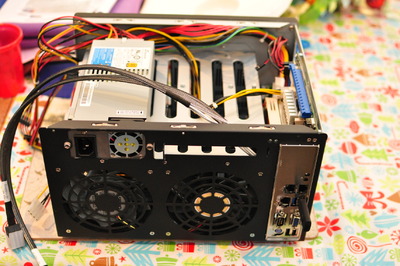 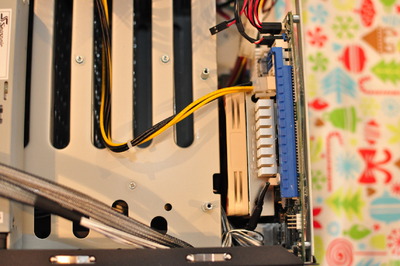 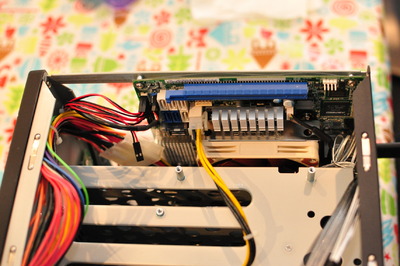 The NSC-800 ships with a mini-ITX sized sheet of plastic, complete with screw holes. The idea is to keep the bottom of the motherboard insulated from the chassis (i.e. avoid a potential short). The ATX power connector from the PSU wasn't long enough to reach the motherboard. I had an extender laying around. But it's one of those 24-pin to 20-pin converters. Based on my short observation period, the board seems perfectly stable on a 20-pin ATX power connection. 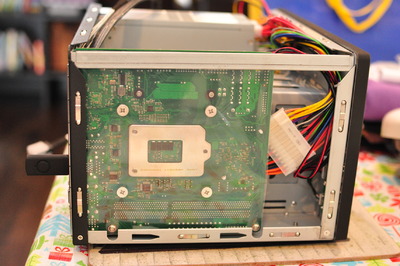 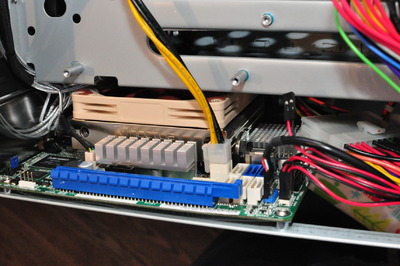 I used this thread, "ITX NAS - case review and build log", from OCAU as a guide and inspiration for my build. Like me, that poster had dual 2.5" drives in a case that was presumably only designed for one. I had this handy standoff kit from Parts Express already on-hand (dabbling with DIY audio amps is another hobby). You can see he used a piece of cardboard to protect his HBA from shorting against the bottom 2.5" drive. A ghetto solution by his own admission. I won't say my solution isn't ghetto, but I think it's a little cleaner: I coated the overlapping part of my bottom drive with electrical tape. (I think my drive's housing is probably plastic anyway, so the tape probably isn't necessary. But just to give an idea to others who might want to do a similar build.) 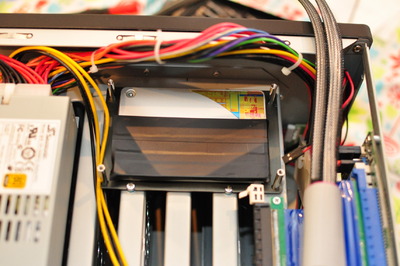 Oops, two widths of electrical tape would have been sufficient! 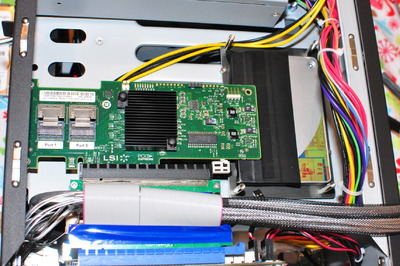 A couple shots of everything in place. 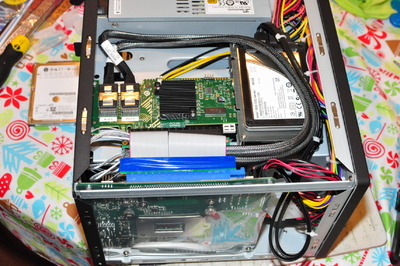 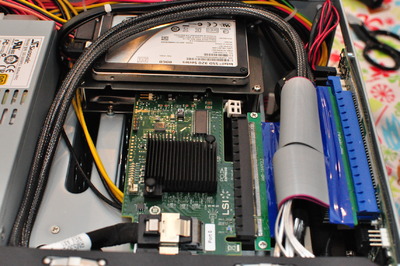 I finished putting all this together Saturday afternoon. It's been absolutely fine since. Hard drive temps have actually gone down since moving into this chassis: they all hover right around 30 degrees C. Idle CPU temps linger in the 30 to 35 degrees C range.

I ran prime95 for about 90 minutes. The hottest any CPU core got was 93 degrees C. A little too hot for my comfort, but I believe that's within spec (anyone know what the thermal limits are for Haswell Xeons?). A longer prime95 run and/or hotter ambient conditions certainly would have pushed the temperature higher still. I might disable a core just to be extra-safe. I have way more computing power than I need, and I can't conceive of a realistic situation where the CPU would ever enter 100% utilization for any prolonged period of time.

All in all, I'm pretty happy with this build.
Reactions: NeverDie

How well do the drive trays fit? Slide nicely? How is vibration?
M

TangoWhiskey9 said:
How well do the drive trays fit? Slide nicely? How is vibration?
Click to expand...

The drive tray fit is consistent with the overall fit and precision of the chassis: acceptable. It's not great by any means. The drive trays don't smoothly glide in with zero effort. Some things require a little push or pull for mounting screws to line up just right. But everything does fit, and nothing requires an inordinate amount of force to get into place, nor did I have to bust out the Dremmel.

In other words, it could be better, but it's decent enough to be usable without modification or significant strength or creative effort. I was annoyed but not angered during the build.

As for vibration... I don't really know how to answer this. I don't see any obvious vibration issues (it doesn't visibly vibrate). Clearly, some vibration is present due to being a box full of moving parts.
R

I had a couple of U-NAS 400s and found the unit to be ok but the trays and gaps between them were a bit worrying. Vibration over time being my greatest concern so I decided not to persue getting a batch in for local resale here.

The newer drive trays are more ridged but can still be 'reluctant' to slide in or out but this may be helped with a strip of low friction tape.

I personally would have liked to have seen the case another 10mm wider for better CPU cooling and with USB3 but apart from that it really is the only option currently in this space. I would agree with Matt that it is usable and will be fine for most uses but, like a lot of this sort of products from China, it meets the bare minimum to match the specifications.

Great build though given the cases limitations .

Have you thought about using a AiO watercooler like the Corsair H60. They are around 28mm tall (give or take the pipe routing) and you could possibly look at routing out through the motherboard rear ports shield and putting the rad on the back of the case.

Hmm, maybe these have just become a bit interesting again .

Awesome Build - Glad I could inspire you.

Hello, this is my first post here and I'd like to congratulate you for this build. Very inspirational.

Could you please confirm the E3C224D4I actually supports VT-d ? I'm waiting for a E3C226D4I right now but it won't be in stock before weeks.

Great project Matt! I was hoping to get one of these boards soon.
M

RimBlock said:
Have you thought about using a AiO watercooler like the Corsair H60. They are around 28mm tall (give or take the pipe routing) and you could possibly look at routing out through the motherboard rear ports shield and putting the rad on the back of the case.
Click to expand...

I have not thought about that, might be worthwhile if you need the CPU's full performance. For me, this CPU is already overkill, so if I give up a core or underclock it, it's not an issue. But I definitely agree with your other comment, another 10mm or so of width wouldn't make the case much bigger overall, but would open up some more HSF options.
M

StephD said:
Could you please confirm the E3C224D4I actually supports VT-d ? I'm waiting for a E3C226D4I right now but it won't be in stock before weeks.
Click to expand...

As I mentioned in the other thread, there is an option in the BIOS to enable/disable VT-d. You can download the manual which lists all the BIOS options.

matt_garman said:
As I mentioned in the other thread, there is an option in the BIOS to enable/disable VT-d. You can download the manual which lists all the BIOS options.

This feature is the reason why I got interested in this board in the first place. I would get in touch with the support if I knew how. Indeed, it seems one needs to fill serial number info in the contact form which I obviously can't since I don't own the board yet. If you know another way I can get in touch with them I'd love to hear about it in pm.

For some reason I was unable to find this earlier today. Question asked. Thank you !
M

StephD said:
For some reason I was unable to find this earlier today. Question asked. Thank you !
Click to expand...

Let us know what the response is
S

Will do. Actually, I'll be stating a build thread soon. I received an important part of it in the mail today : IntelÂ® XeonÂ® Processor E3-1230L v3. I'm stoked.
S

MikeBuzz said:
Let us know what the response is
Click to expand...

Did you change your order? Think I will place my order in the new year, what it the difference between the c224 and c226 version?
S

I got lucky and my order is shipping today.

The main reason I stick with the c226 is the c224 wouldn't let me use a core i7 processor if I ever need to.

It also misses vPro support which is not much of a deal breaker for me but over all the c226 seems like a better deal (which often translates in stronger value on the used market).
M

How do you have the case fans managed? Are they set to smart fan in the BIOS? As just found this thread https://www.google.co.uk/url?sa=t&s...LfhkhN9us6bJYDFrg&sig2=p45A36oAPAxOd7TuaoIW5g
M

Anyone seen this new board