These drives are essentially Hitachi's restickered as Toshiba. For those that have been living under a rock, WDC had to forfeit a Hitachi plant in China to Toshiba to gain FTC approval for its HGST acquisition. Thank god for the FTC or home & SOHO storage really would be in a state of Seagate/WDC duopoly suck.

This is good news for anyone in the market for a NAS drive, since WD Red pricing has become somewhat obnoxious since release - first $179, now $199 and still sold out so the market is clearly hurting for another option. Its also good news for existing Hitachi owners wondering how they were going to expand their drive pool -- by all indications these should be able to mix in perfectly well with an existing set of Hitachi's in a RAID, etc.

Note: What the press release doesn't mention but what I have on good authority is a 4TB offering is in the works and should be released some time before end of year. Reason its not immediately available is because WDC held back the Hitachi 4TB property in the transition and Toshiba ended up with the immediate ability to continue "printing" everything else up to 3TB. 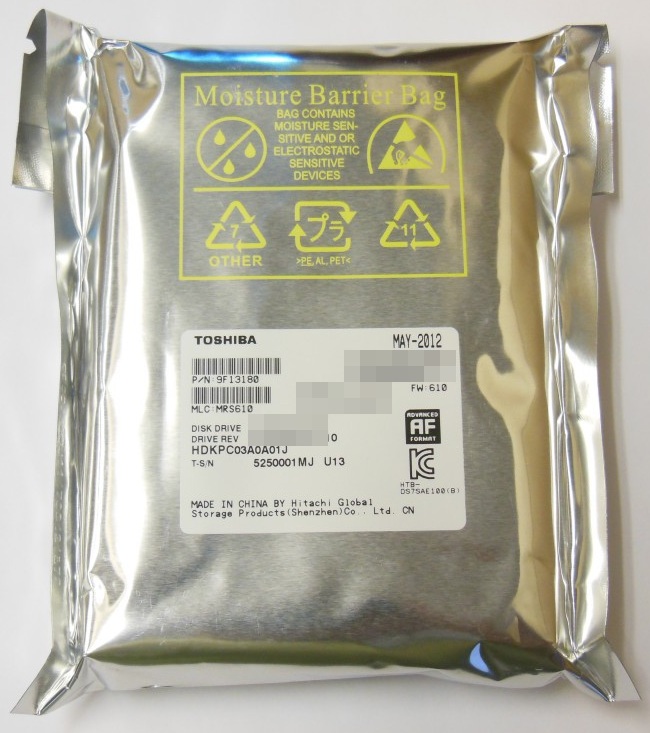 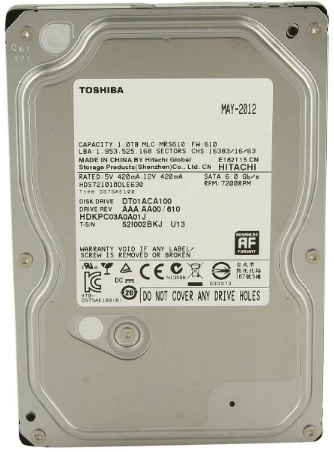 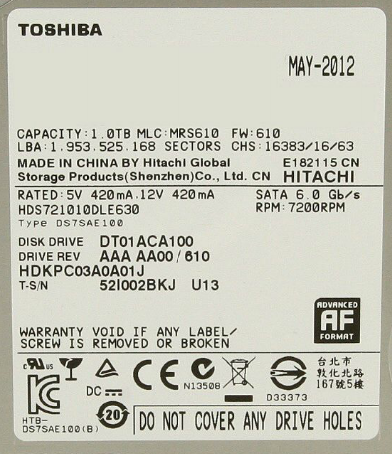 Why am I the first person to post a response to this? I think this is the single most important post made on this forum in months. (I don't mean to begrudge everyone else and their important goings on). Storage doesn't exist without drives and I'm running out. All of my WD Green drives have failed and been exchanged via RMA at least once. My success rate with Seagate isn't as bad but it would still make a grown man cry. I haven't lost a Hitachi drive yet with the exception of one DOA brick which I still need to deal with.
O

LOL - people will slowly wake up to the news, even if they don't read about it or understand the ramifications they'll feel it in drive pricing and more choice in the marketplace.

This is huge news. Not going to have time to do a STH writeup.

odditory, want to post the above main-site or e-mail me another text. I do not want to use the sticker image from another site though as that is generally bad form.
C

Any word on how long before they are released in mass to market? Also, the IP for the 4TB drives was kept by WD?

Strange since it is a May label and it still says produced by Hitachi on it. Drive makers get things to the US within 30d so they should be out by now.

MiniKnight said:
Strange since it is a May label and it still says produced by Hitachi on it. Drive makers get things to the US within 30d so they should be out by now.
Click to expand...

Good catches. I didn't see the Hitachi branding on that the first time.

If you do not have receipt drive manufacturers usually have something like 45days after manufacturer is warranty start date unless you can support purchasing the drive later.
O

MiniKnight said:
Strange since it is a May label and it still says produced by Hitachi on it. Drive makers get things to the US within 30d so they should be out by now.
Click to expand...

Not strange since there was some overlap in manufacturing that was part of the transition agreement -- apparently WDC assisted/"kickstarted" Toshiba's manufacturing by having HGST produce them on their behalf until they took over. It's somewhat of a tangled web from the outside looking in but bottom line if its got a Toshiba label on it, you're gold because warranty replacements will come from Toshiba.

I've updated the OP, one extra twist here I've discovered is the earlier Toshiba-stickered models like the 1TB Toshiba DT01ACA100 pictured in the OP and manufactured MAY-2012, actually still reports as Hitachi HDS721010DLE6​30 to the identify device ATA command. So that drive is equivalent to the Hitachi 7K1000.D. Coincidentally that particular model has been quietly available for the past 5-6 weeks at online retailers.

I'm working on an equivalency table of Hitachi:Toshiba drives including the 7KRPM and 5KRPM models.

Interesting to note the Toshiba DT01ACA100 1TB drive has been quietly available at online retailers for the past 5-6 weeks. And despite the Toshiba sticker apparently they even still show as a Hitachi HDS721010DLE6​30 (Hitachi 7K1000.D) when queried by the controller. However I'm sure this new batch of 1.5TB/2.0TB/3.0TB announced in the press release will ATA-identify as Toshiba.

The significance here - and good news for existing Hitachi owners looking to expand their drive pools - is its more confirmation that these are literally just restickered Hitachi's rather than some new ground-up design based on Hitachi designs/patents. That was the biggest question mark and potential sore sport for me, because a new design would've meant unknown quantity versus Hitachi already having a well established track record for reliability.
Last edited: Aug 10, 2012
F

Thanks Odditory, cant wait for the table... Any update on that?

I'm really HOPING they are going to do something equivalent to the Hitachi 3tb - 5400 drives - I need to add some to my RAID array at a decent price...

also found this link... (at the bottom there is a neat image)
http://www.storagenewsletter.com/news/disk/toshiba-3tb-3-5-inch-hdd
O

Any idea when they'll start showing up, read an article that said they should start shipping in mass at the end of this month... Really hoping for a nice price point

Here they are on Toshiba's site
http://storage.toshiba.eu/cms/en/hdd/computing/product_detail.jsp?productid=452

Also have a tool you can download for AF drives
http://storage.toshiba.eu/cms/en/support_services/advanced_format.html
Last edited: Aug 24, 2012
1

Toshiba's new 7200rpm models have been available in Japan and parts of Europe for months now. No sign of the low power reduced rpm models yet. Some retailers in North America seem to have stock, but still no availability by Newegg or Amazon.

I hope the 5900 RPM 3TB model returns soon. My 3TB Hitachi 5K3000 array is almost out of space. I would so like to expand it with similar, or even matching drives.

It sure would be great if the consumer RAID array, mine included, can survive at a reasonable price using these drives.
N

Interesting what this guy says: "...These models [DT01ACAxxx (7200RPM, 64MB cache, SATA-600 interface)] , on the other hand, are new. Hitachi was probably preparing to launch them as the Deskstar 7K3000.B series, but, with Toshiba having received Hitachi's manufacturing assets, the drives are going to be released with Toshiba badges instead. Interesting."
O

I'd definitely wait out the 1TB/platter models if buying new. In my testing a 7200RPM 1TB/platter 3TB would tend to run as cool or cooler than 5-platter 5900RPM 3TB, unsurprisingly.

Will have to wait for more places to get these into stock in order to determine what # of platters to expect when purchasing.
Last edited: Oct 18, 2012
L

What options do I have today or in the near future, to expand my array of 3 TB Hitachi 5K3000 drives? I see the Toshiba HDKPC08 is available, but is 3 TB 7200 RPM. I would prefer to stick with the 5900 RPM model to more closely match what I have. Or will Toshiba even offer 3 TB 5900 RPM drives?
O

Hitachi 5940RPM 3TB = Toshiba DT01ABA. Difficult to come by right now, have seen them around for $150 but stock levels and price should improve any time now.

According to atleast a couple reviews the Toshiba's identify as Hitachi with the Hitachi model# and everything. Whether it will always be that way or just 'transitional' who knows. http://www.tonoko.info/2012/09/15/5325/
Last edited: Oct 21, 2012
F

lifespeed said:
I hope the 5900 RPM 3TB model returns soon. My 3TB Hitachi 5K3000 array is almost out of space. I would so like to expand it with similar, or even matching drives.

It sure would be great if the consumer RAID array, mine included, can survive at a reasonable price using these drives.
Click to expand...

Has anyone seen where anyone has actually added these into a hardware RAID???? Want to make sure they didnt slip something in them, that would cause them to drop out... odditory?