mrkrad said:
did you try putty with flow control disabled (!!) and intercept the 3 second boot-up? Most VXworks have the same bootloader with function 30 backdoor built in.
Click to expand...

Interesting, can you please elaborate? There is a boot selection menu as you can see below, but there are no other visible prompts at boot. I have so far been unable to load any new code (including the preinstalled image) on the unit using XMODEM or the "copy" command in the Cisco style CLI. When using XMODEM, the transfer has been stalling and stopping with no error about halfway through the transfer, and I am getting a file write error when using the copy command to load an image from tftp.

I noticed that the documentation is about an image with full routing functions (static routing, ospf, etc) - while every image I've seen here or on my devices does only switching. Do you have any idea where we could get the routing image? It would make these devices much more valuable.
Reactions: PepeMachete
K

Ok, it seems that it's not the software itself that disables the routing. I've found a way to decompress the image, and there're lots of strings that suggest routing support.

(You can ignore the errors from gzip.)

My device has the following prompt:
(Switching) #

I've heard that devices that do routing display the (FASTPATH Routing) # prompt (this string is present in my image, one more clue that it's not the image that is at fault here).

Is it possible that there're two different versions of LB4M, one with routing support, one without it?
Reactions: PepeMachete

koszik said:
Is it possible that there're two different versions of LB4M, one with routing support, one without it?
Click to expand...

That would be crazy. I thought these were almost all switches that Quanta built for Google or a company like that? I would think that company would want 1 version to support.

Have you gotten to the web management interface? Mine works as a dumb switch just fine but I really wanted a GUI
K

From what I know large cloud providers use these devices, Google could be among them.

I've read up on the BCM56514 which powers the device (there're 2 of them in it, each providing 24 1g ports and 4 10 or 12g ports - it seems one 10g port of each chip is used to provide the 2 SFP+ ports, and probably the 3 remaining high speed interfaces are used to interconnect the two ICs inside the switch). The datasheet explicitly says it supports ipv4 and ipv6 routing, and ipv6 tunneling, all from hardware - so I really don't see why my device refuses to do these. After logging in, what prompt do you get?
And no, so far I haven't been able to use the web interface - but my priorities are getting layer 3 support first, the GUI is not that important to me. Note that probably the CLI lets you do everything you could do from the GUI.

This is from the diagnostics menu, supporting my conjectures:


It would mean that each half of the system has 24x1+1x10 = 34Gb/s of bandwidth to the outside, and the interconnect is 3x12=36Gb/s, so there're no bottlenecks inside the switch.

Thanks for digging that up. Funny nobody has found a web interface. At least you wouldn't have to search (as much) for commands if it was decent.
Z

I was able to get into the web UI. I connected the management interface to my network, it pulled DHCP. I then was able to login into it using the default user/pass.
K

zunder1990 said:
I was able to get into the web UI. I connected the management interface to my network, it pulled DHCP. I then was able to login into it using the default user/pass.
Click to expand...

Can you share the firmware from your device and the output of 'show version'?

zunder1990 said:
I was able to get into the web UI. I connected the management interface to my network, it pulled DHCP. I then was able to login into it using the default user/pass.
Click to expand...

Which default login/ pass did you use?
Z

As far as the version I will get that tomorrow when I am in the office.
Z

Here is what I have

The images that I have seem to be a different revision than the ones that came with ewheelerinc's unit.
Z

Is this switch stackable? If so, is it automatic or does it have to be configure. If it needs to be configured, how should we go about doing that? =)
M

Also, anyone been able to successfully install an rsa key for ssh access? I converted my pub key to pem format and i can get the scp connection to happen, i even see some transfer, but then it says file transfer failed. I tried from the gui and telnet. Unfortunately i have nothing to really go on on why it might have failed. Dont know if its the file format or what. i tried both rsa2 and rsa1. =/
M

diglett said:
Interesting, can you please elaborate? There is a boot selection menu as you can see below, but there are no other visible prompts at boot. I have so far been unable to load any new code (including the preinstalled image) on the unit using XMODEM or the "copy" command in the Cisco style CLI. When using XMODEM, the transfer has been stalling and stopping with no error about halfway through the transfer, and I am getting a file write error when using the copy command to load an image from tftp.

Ive had the exact same problem with the lb4 model as well. Same OS though.

Anyone know the console settings? I have 9600 8N1, but im getting no response from the keyboard. EDIT: nevermind, i had to turn of hardware flow control.
Last edited: Feb 24, 2014

Here are the details of my boot flash


Code:
Here is the output from show version:


Code:
And here is a screenshot of the WebUI on my version: 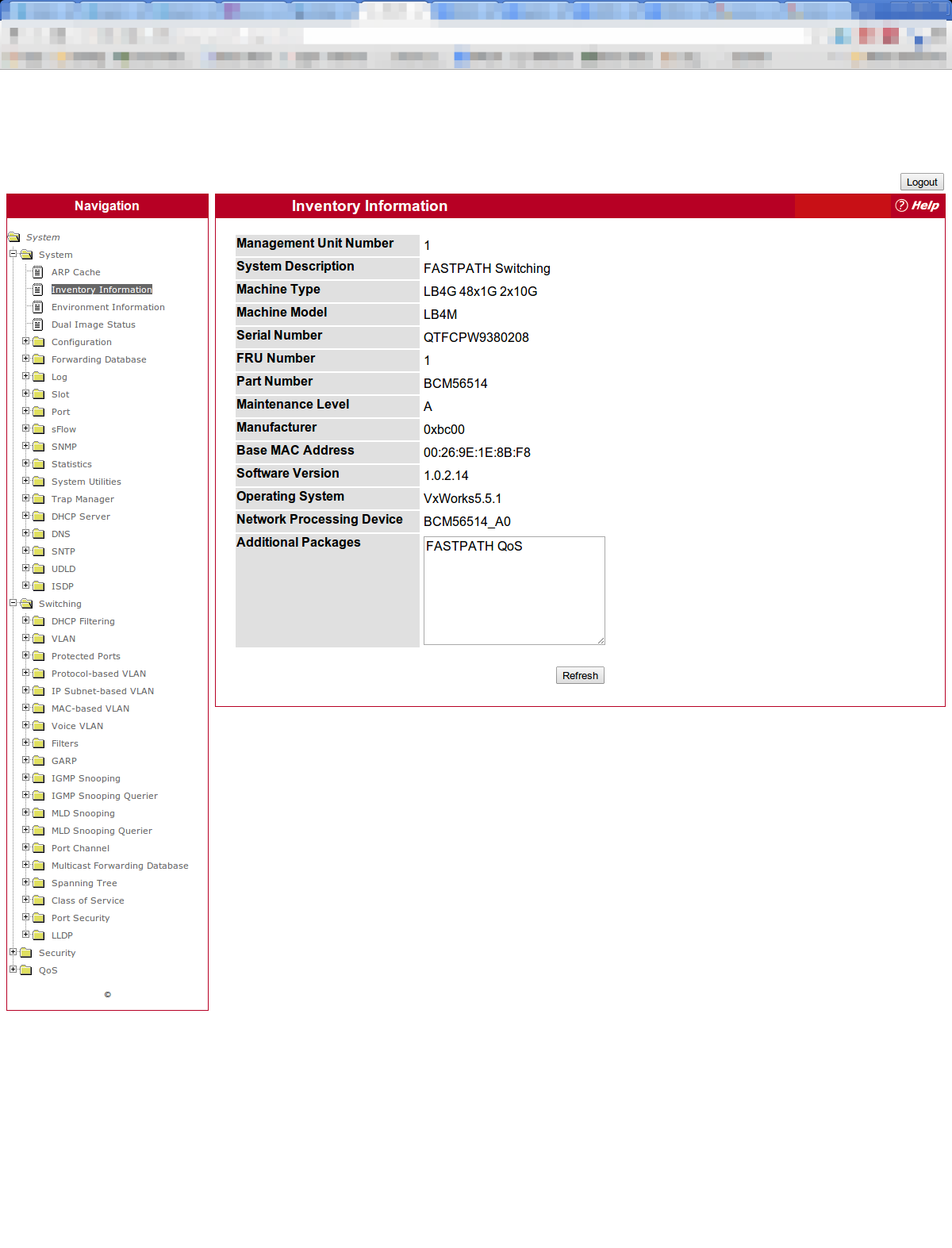 Not sure how to resize that image....sorry guys
W

Hey Guys. I bought one of these and I have no idea how to configure the ports to work with each other, connect to the management GUI, or anything of any real use. I looked at the user manual and the way it reads to set an IP does not work. I did manage to set up a serial connection so I can see the CLI, but honestly...its nothing like Cisco. I mean, it seems at first like Cisco IOS, but when you start trying to configure it...it isnt...

You need to use the management port or the serial console to do it. You have to activate the ports (either select all or whatever you click/tell it to do, I don't know if there's a power usage benefit, and doubt it) which are in admin lockdown mode by default, but they just need to be taken out of that mode, they don't have to be added to a VLAN1 management group or anything like that. The built in help isnt too bad either, and its built in, not like the online help Cisco SG300-10P i just snagged - so annoyed, on a $250 switch - because it'd not like you'd ever need the reference when working through, I dunno, an internet connectivity issue? It's a little awkward, the way they write, but once you see what works and doesn't, you'll understand what they mean.

I may have (probably) plugged a cable into a portable computer and used Wireshark to find its IP/subnet and then set that computer to match subnets and configure it - I think there's a link earlier to the manual in the Quanta thread, but if not, PM me. After that, pull up the webpage, set a static IP for the switches Management port consistent with your existing (or planned) subnet, and plug that into your current network and go from there. The management port is completely separate from the switch, so there's no loopback problem if you plug both of them into an existing or future switch. Always nice to be plugged into the serial console too to watch debug messages (normal Cisco RJ45 type) when doing this stuff too, in fact I'm sure I was dping that to reset the password/defaults. Not sure I had the manual at the time. Sorry, I did this back in October or so, and it's not on any of my networks any more, but between this thread, basic networking, and Google you'll be fine.

It will do DHCP, but I'd rather do that on a PDC+load balance/failover partner when there's a domain, or on a Linux box that's doing DNS and/or "edge routing" a LA *WRT and let my switch do switching. Actually my DHCPd these days is in a VM PDC with failover to a bare metal WS2012 workstation and I think I have some other VMs authorized to do it.

I dunno, it's your only low power device (uh, at 80W+) and you don't have a directory/central auth system going, rock on, but you don't buy 48 gig ports plus two 10GBes to plug in a laptop, a desktop, and a printer, and a router... or from another point of view, the seven Noctua 40mm fans I bought to shut the damn thing up cost as much an as entry SMB smart switch...