I've been getting alot of PM's asking how to OC an AMD Epyc.

All you need to do is write the OC to the CPU MSR. As a reliable tool (for windows) for this i modded AsusZenStates to run on non Asus boards, you can download it here:
ZenStatesAll(2)

If you don't trust my version you can simply do it yourself by editing the check vendor function in the original .exe via ilspy and reflexil, it's really not that hard. For Linux you can find the python script ZenStates-Linux on GitHub.


So about multiple CPUs configuration you just need to start AsusZenstates as usual,click on apply in order to apply your custom pstates settings to CPU0.

-Once is done go in task manager,find AsusZsSrv.exe (not AsusZenStates.exe) then click on define affinity.
-After you'll change Group 0 to group 1,check "use all core" and click Ok.
-Now you're able to modify the CPU1 pstates by clicking on apply in AsusZenstates app.

In order to revert to CPU0 just change group 0 and don't forget to check "use all core" in define affinity .
Each time you reboot the computer you'll need to apply this process.
If you get an "access denied" error when you want to change the cpu affinity just kill the process and restart it .
I managed to pull of 3.4 GHz @ 1.3V on my cheapo ES and 3.8 GHz @ 1.375V with only 16 cores enabled. The VRM OCP will probably shutoff your PC if you're going higher with the voltage. 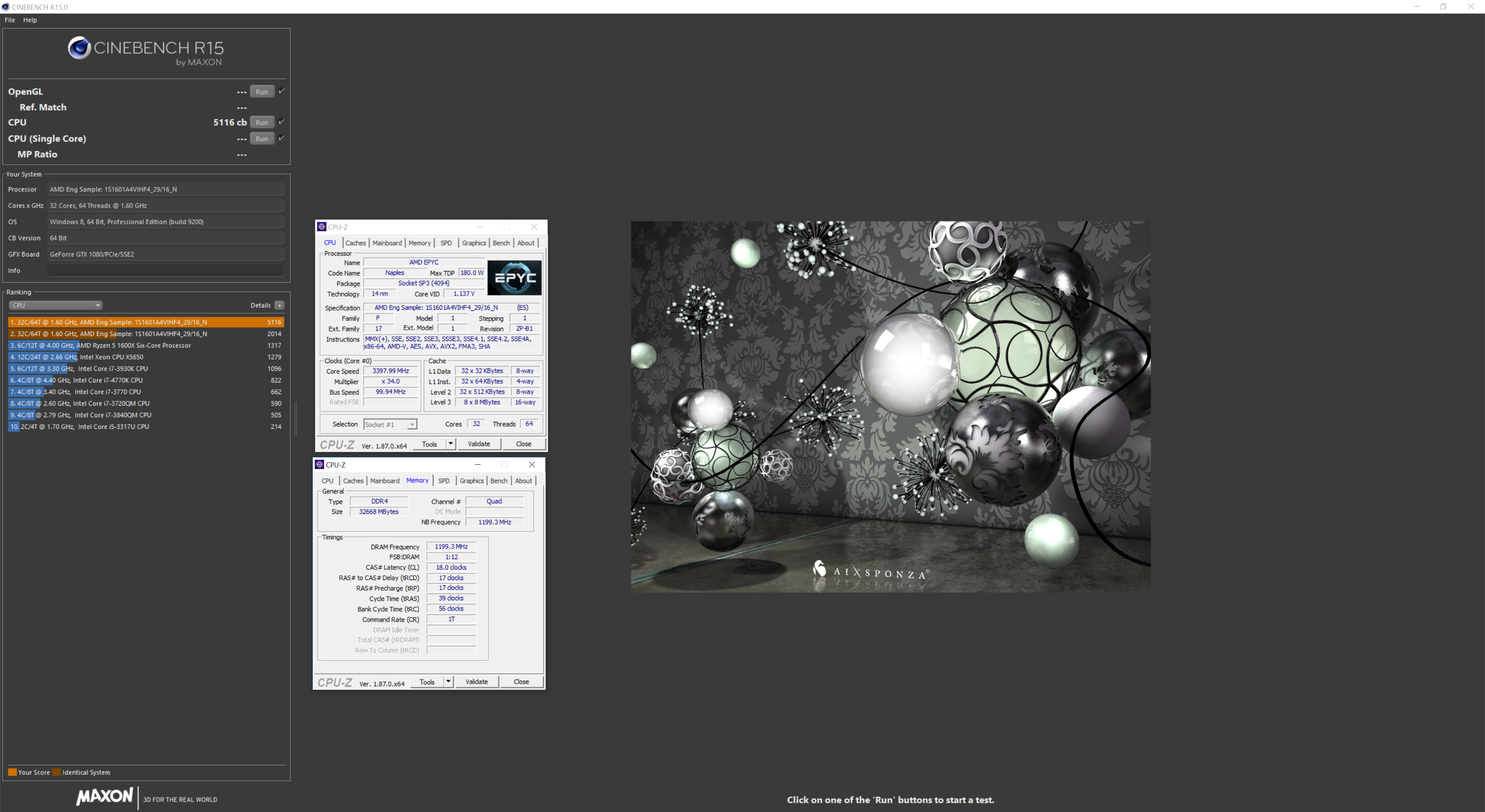 Enjoy and keep an eye on your VRM temps.


Info about the 1S Engineering Samples:

I have mine for a few month now and did some testing.

Mine won't work with AGESA updates newer than 1.0.0.3, the system will post and sometimes boot but it'll constantly run into bluescreens and freezes.

Also microcodes newer than version 29 won't work, the system will post but run in a bluescreen when booting windows (haven't tested linux yet). But mainboard vendors probably won't update them, because they are for the threadripper CPUs (Epyc ES and TR1 CPUID: 800F11, Epyc Retail 800F12). Maybe the microcode file for Windows needs to be deleted in the future.

I'm running the epyc in quadchannel and the performance in cinebench is really inconsistent with the 1 DIMM per Die setup, playing around with the tool CorePrio and local dynamic mode helps in some cases but is not a solution for everyday use. Populating the Channels closest to the CPU stabilized the performance alot for me, but the memory performance tested with aida64 suffers severly from this.

Here's a RAM test i did with aida64, with the optimal quadchannel 1 DIMM per Die setup. Latency is really not looking good on these CPUs.

So if anyone wants to DIY this mod heres what you need for SuperMicro boards:

This is only for Supermicro Boards (16mb ROMS only!), for different Boards with fully locked CBS you have to find another Option like Eventlog you can give up. Boards with partially unlocked CBS should only need the BCP edit and maybe a IFR edit of the CBS menu.
1.
Open your rom in UEFITool, use text search and find the following things AMITSE CbsSetupDXE EventLogSetupPage
2.
Extract the PE32 image Section from each one as-is.
3.
Run CbsSetupDXE and EventLogSetupPage through the IFRexctractor and open the .txt's in NotePad++
4.
Note down the first marked string from Form Set and add the part from Form, do this for both IFR Files (cbs and event).

5.
Open AMITSE in HexEdit search the String from EventLogPage, and replace it with the CBS string. Save.
6.
Go back to UEFITool and Replace AS-IS the AMITSE module with the modded one. Save the ROM.
7.
Open the ROM in AMIBCP and spend the next 30 minutes setting every single CBS Entry from default to User. Save again.
Might be unnecessary, setting Combo CBS to 4 in BCP might also unlock everything. Still need to test this.

If submenus are still missing you have to do an IFR Edit.
Explained here if it's a simple lock (switching 46 02 to 47 02):
Modding the Asus Prime X370 Pro BIOS

Both of them have also a patch in the CBS P-states to select a DID lower than 8, but this didn't make the P-states work.

Same as on previous Gens, ES chips are fully unlocked. Couldn't get my 1s chips to post unfortunately.

The retail CPUs are also unlocked

Going to need some qualifiers.

Fully unlocked as in apply any multiplier or are you simply forcing turbo states to all cores?

Are they also voltage unlocked?

I um... watercooled a 4p g34 es box and overclocked all 48c to 3.8ghz... I am drooling at the possibilities of rebuilding harbringer ....
I can add the new MSR registers to Turion power control... an old program originally meant for getting turion laptops power usage under control... got hijacked for overclocking many generations of Opterons.
Reactions: gigatexal and cactus

der8auer did all of his epyc stuff with retail chips, but he went the painful way of doing everything by hand with rw-everything.

I don't want to brag but i'm proud of this nonsense. I had a 5 CPU Rig with 3x 16C Opteron and 2x X5650 Xeons on 1 Waterloop as mining rig lol. My opterons hit 4.2 GHz but after a few month of full load @ 3.4 GHz they degraded so i couldn't claim my sweet hwbot entry. 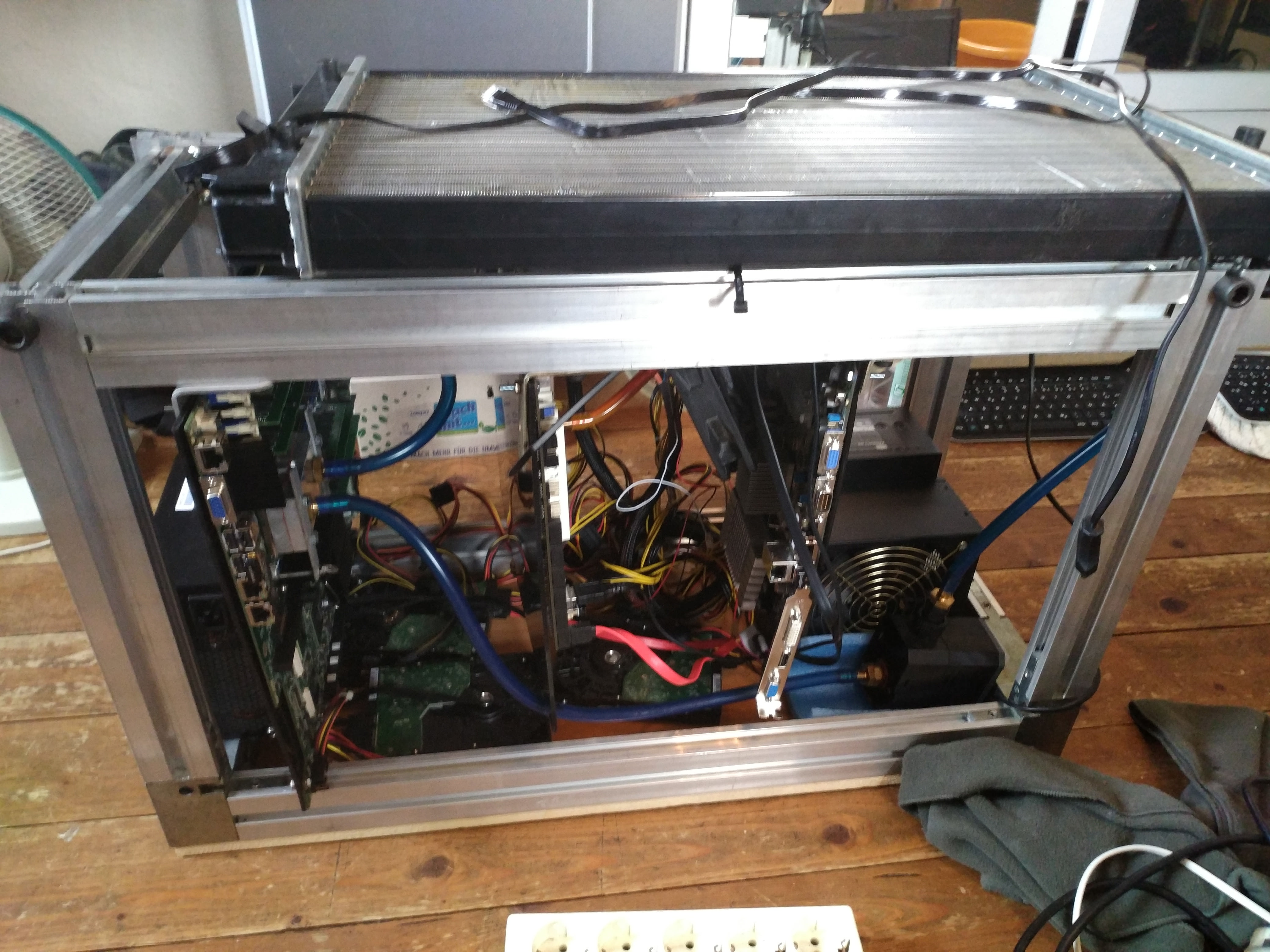 Thank you so much for this nero243. currently only working on 1 of my epyc 7501 dual socket board any ideas. can all core one cpu to 3ghz 1.05 volts up to 7666 cinebench but would like to apply to other cpu. Cant get multiplier past 3ghz though maybe fid/ did thing. You disable core performance boost c1e or c6 any guidance would be appreciate.!

Some FID DID combos did not work for me. Try a DID of 2 and set the FID according to the desired frequency. Core Perf. boost is disabled for me, because it wasn't working properly with the ES in the first place.

I also can't confirm that this will work on all mainboards, some might have a locked MSR.
X

Thank you for your help.i have the supermicro h11 DSi nt. Works on one could any ideas if there is a exe command for could affinity. My bios settings be the same probably you leave could at auto or enable cstates performance determine etc.voltage seems to apply fine ctdp manual doesn't seem to override Max 170 watt.how you check stability p95 watching vrms close.der8auer was boiling vrms hehe novac to the rescue.

Don't seem to need much voltage for cinebench
Last edited by a moderator: Feb 6, 2019

Shame DT AC hung up his cnc mill and stopped making custom waterblocks... I had 4 G34 blocks made... looks like I am going to want 2 SP3 blocks.
X

xdregox said:
Thank you for your help.i have the supermicro h11 DSi nt. Works on one could any ideas if there is a exe command for could affinity. My bios settings be the same probably you leave could at auto or enable cstates performance determine etc.voltage seems to apply fine ctdp manual doesn't seem to override Max 170 watt.how you check stability p95 watching vrms close.der8auer was boiling vrms hehe novac to the rescue.

Don't seem to need much voltage for cinebench
Click to expand...

If it only applies it to one CPU in the dual socket board you might have to write the other CPU MSR manually via RW-Everything. AsusZenStates wasn't designed for multiple CPUs.

cTDP doesn't matter, once the CPU goes into OC mode it won't throttle no matter what. The only thing holding you back will be the VRM overcurrent protection and heatsink. I'll make a VRM waterblock for my board when my college exams are over.
X

nero243 said:
If it only applies it to one CPU in the dual socket board you might have to write the other CPU MSR manually via RW-Everything. AsusZenStates wasn't designed for multiple CPUs.

cTDP doesn't matter, once the CPU goes into OC mode it won't throttle no matter what. The only thing holding you back will be the VRM overcurrent protection and heatsink. I'll make a VRM waterblock for my board when my college exams are over.
Click to expand...

Was afraid of that. Mounted some memory cooler fans on vrms.

Patriot said:
Shame DT AC hung up his cnc mill and stopped making custom waterblocks... I had 4 G34 blocks made... looks like I am going to want 2 SP3 blocks.
Click to expand...

I'll have to upgrade my waterblock too. I'm currently using a aquacomputer cuplex kryos with the AM3 mounting kit (not pretty but works), but the waterblock is to small for the huge CPU. 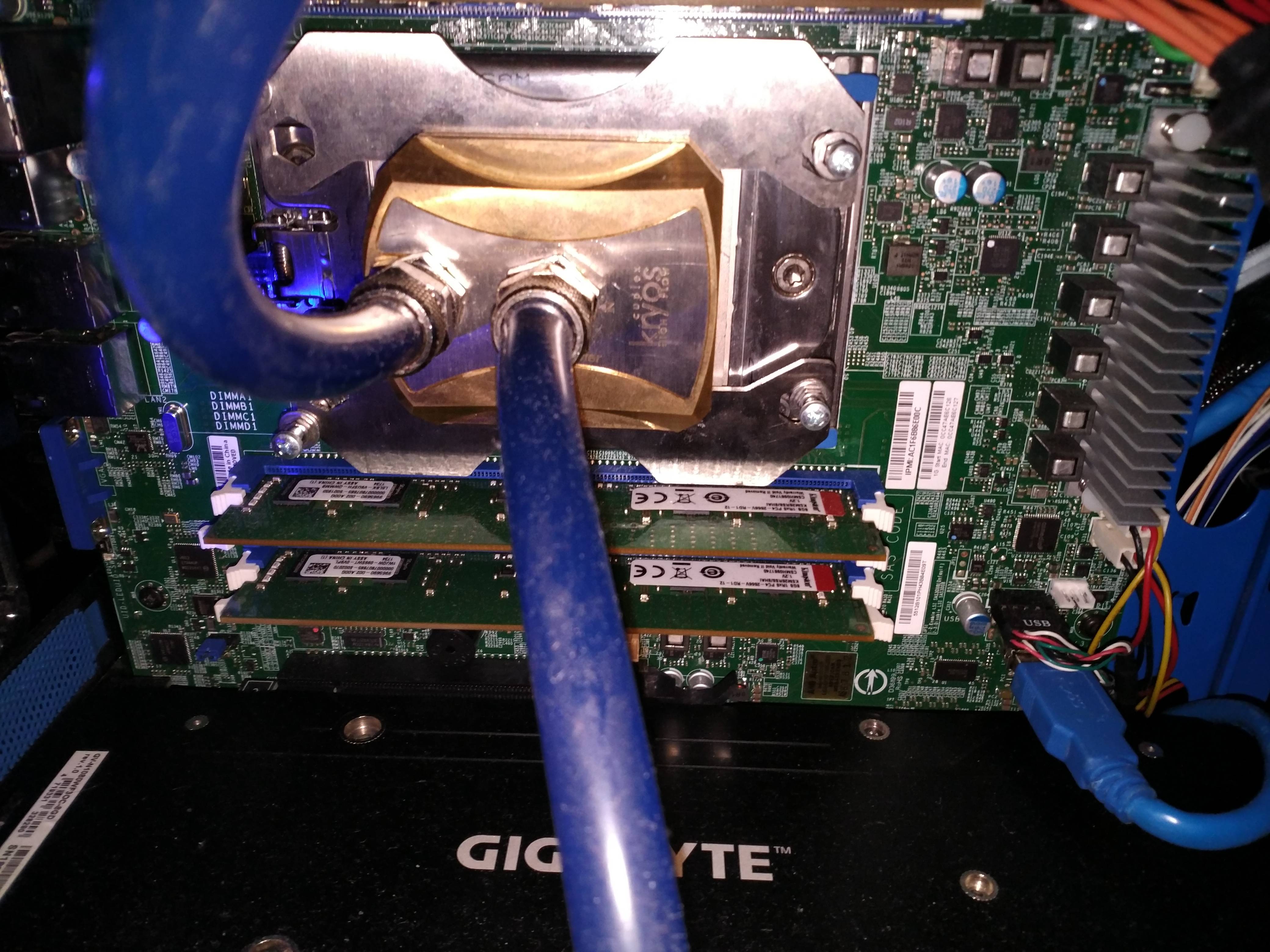 xdregox said:
Looks good but big chips for sure it's the vrms we need blocked
Click to expand...

My H11Dsi board already has the VRMs sinked, perhaps they need some more direct airflow though.

Just as a guidance... traditionally don't go crazy on cpu volts... Supermicro is pretty good about vrm design, keep them cool you are fine... However... the traces to the driver circuit.. that goes first. Or atleast did on my quad G34 board. Something ~300w+/cpu

You won't get into dangerous territory on these boards the OCP will shutoff before and if the VRMs get to hot the system will automatically thermal throttle.

I have a usb to I2C device maybe i can disable the OCP at some point, but i don't have alot of experince with this stuff.
R

@nero243 the USB to i2c / smBus isn't really necessary.
i mean, everything is connected via smBus, so you can reach those controllers from within the OS.
Most often they are actually abstracted by a Driver, for example on GPUs, and the driver then has an API for voltage, etc. control that every tool uses.

And there lies the real problem, those VRM controllers do have Firmware, and a carp ton of Registers for info and settings.
Sadly, those Register-Maps and everything else of interest is most often not publicly available.
NDAs everywhere. Probably because of NDA / Proprietary Voltage Control Standards like Intels VR12 and 12.5.

Elmore with his EVC has made this tool with such knowledge. He worked for ASUS a while back.
So, good luck getting what you need : )

I've already dug through the datasheets, there's no info about the SMBus. Althought it is possible, there is a software called VRMtool to control IR voltage controllers on AMD GPUs for example.

All the I2C registers are publicly available in the IR software PowIRCenter. The I2C device from IR for their controllers comes at a price of 60€, i haven't seen the elmor evc for sale anywhere but i think it won't come in cheap either. But it should be possible to get the adresses and values from the software and manually write them with any i2c to usb device.

This is what it looks like, to disable the OCP on this (random) controller it should work by writing the value xDD to the adress x6D and the slave i2c adress should be x08. Feel free to correct me if this is BS, i only used my i2c/uart device to flash OpenWRT on my WiFi router...

Was waiting on elmor evc that der8auer was going to sell looked cool will try rw everything again try to copy register from zenstates overclock to other cpu see what changes wanted to avoid that but the zenstates app works great will buy Elmore evc to support.almost thinking of picking up asrack single socket and splitting up CPUs. Lot of performance on one cpu
Show hidden low quality content
You must log in or register to reply here.
Share:
Facebook Twitter Reddit Pinterest Tumblr WhatsApp Email Link
Top Bottom