Restrictions:
Linux is not my preferred or main platform. Many napp-it features rely on Solaris projects like the CIFS server with full Windows SID and ACL support, Comstar iSCSI or Crossbow network virtualisation. A napp-it version with similar functionality like on OmniOS is currently not planned.

Wow, this is a great surprise! Just tested on Ubuntu 12.04.4 64 bit server, and it seems to work really well. One thing you might want to add to your directions is to

Code:
before you setup the ppa for zfs, otherwise that command will fail.
Last edited: Jan 29, 2014
G

rubylaser said:
Wow, this is a great surprise! Just tested on Ubuntu 12.04.4 64 bit server, and it seems to work really well. One thing you might want to add to your directions is to

Code:
before you setup the ppa for zfs, otherwise that command will fail. 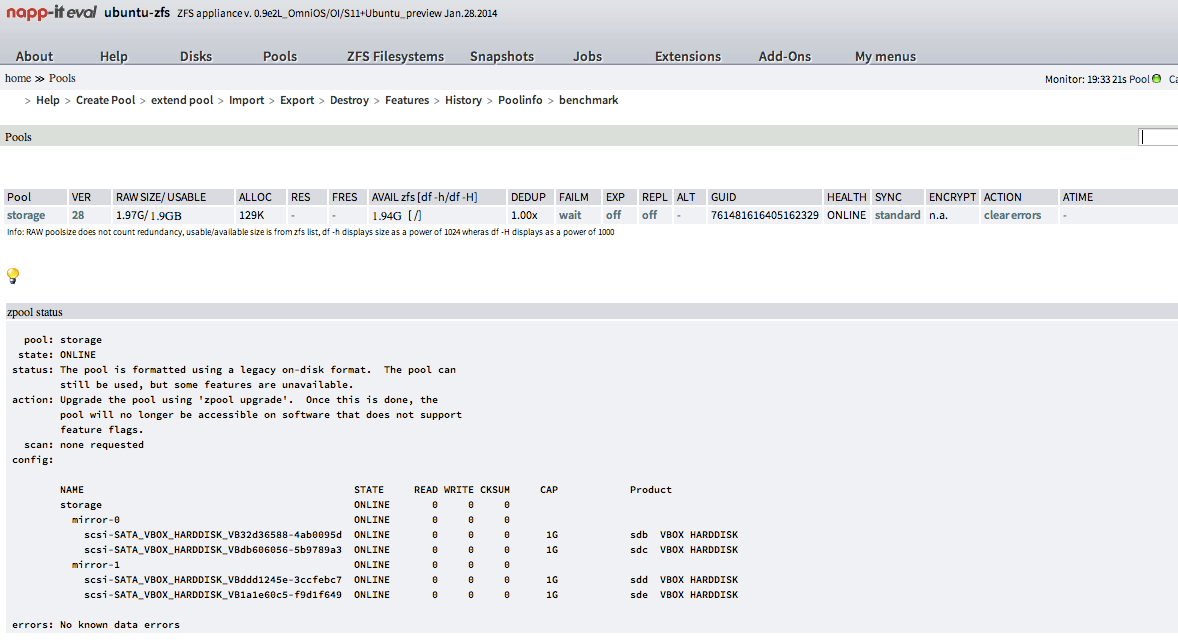 Thanks
Added to the howto (together with setup instructions for Debian 7 and basic hints about other distributions)
http://napp-it.org/downloads/linux_en.html
Last edited: Jan 29, 2014

OK... so this is the coolest thing... Ubuntu ZoL Napp-it in Hyper-V with proper integration components AND it works with Hyper-V pass-through so you can present raw disks to the VM without Hyper-V or an add-in controller.


Code:
Can be changed to:

Code:
Adding -y just means you can use the disk space.

Sitting at under 3.5GB right now on the dynamically expanding .vhdx.

Patrick said:
Can be changed to:

Code:
Adding -y just means you can use the disk space.

Sitting at under 3.5GB right now on the dynamically expanding .vhdx.

Patrick, I hope you plan to do this and provide a write-up, I'd be very interested. I'd especially be interested in some directions for users to do some simple tasks in vyatta like setting up OpenVPN Road Warrior, port forwarding, or a standard home option like a dynamic DNS client update.

As a sidenote gea, you can chain all your commands together if you want to do it all on one line.

Code:
Finally, just a little correction, the -y option is the shorter version of the option --assume-yes. It assumes "yes" as answer to all prompts and will run non-interactively. Meaning you don't need to answer yes to actually install these packages.
Last edited: Feb 1, 2014

rubylaser - I am certainly working on this. The initial Hyper-V piece is scheduled for Tuesday.

Good catch on the -y. That was probably an overly simplistic explanation.

Patrick said:
rubylaser - I am certainly working on this. The initial Hyper-V piece is scheduled for Tuesday.
Click to expand...

Patrick said:
rubylaser - I am certainly working on this. The initial Hyper-V piece is scheduled for Tuesday.

Good catch on the -y. That was probably an overly simplistic explanation.
Click to expand...

Patrick do you have any update? I've been waiting all weekend for this.

1.) Is this linked guide still up to date? (considering this post is 2 years old)

2.) How stable is this? Is it production ready at this point?

3.) If I were to migrate from a current FreeNAS to this Napp-IT on Linux setup, are there any major features I'd be missing?

4.) Is there any reason I couldn't (or shouldn't) install this inside an LXC container with direct access to my two LSI 9211-8i HBA's? It seems like a fantastic opportunity to reduce virtualization overhead of my NAS, especially considering how much RAM ZFS likes.

2
napp-it on Linux is a basic management option to help managing zfs, pools, disks snaps and shares with an autojob function for snaps, scrubs, alerts and replication in a Web-Gui as an alternative to the console option. Only a small fraction of the features of the Solaris version are included. This does not affect Linux stability so the question is more if ZoL is as production ready as ZFS on Solarish where it comes from and was developed for or BSD where it is available for years. This is a little different to FreeNAS where GUI and a special distribution of BSD is a combo and where you should not use the console.

3
Linux and BSD are quite similar regarding storage services ex SAMBA. This is different to Solarish where Sun had developed and integrated their own storage services into the OS/kernel and around ZFS like their kernelbased CIFS server, iSCSI with Comstar and NFS.

Feature wise, the differences between BSD and Linux may be small. You may miss some GUI storage management options on Zol compared to FreeNas or napp-it on OmniOS/Solaris.

4.
ZFS does not need or like RAM beside the dedup feature.
Its your performance demand or expectation that requires RAM. If you are satisfied with 50-200MB/s sequential disk performance and around 100 iops you are ok with 2 GB RAM. With a lot of RAM on ZFS most reads are delivered from a readcache what can improve performance dramatically.
Last edited: Mar 24, 2016

Do you know of anyone that has gotten this working on RedHat/Centos?
G

I have not tried RedHat but napp-it on Linux is stripped down to pure ZFS and Job/Snap management so it requires only ZFS (and this is quite identical in every Open-ZFS setup) and mini-httpd as the underlying webserver, it should work on any Linux when the two are installed. Perl should be available always per default.

That said, I do not fully support Linux as every Linux distribution is a little different and even Debian and Ubuntu (where I tested napp-it) is different from release to release. This is also the reason why I removed setup of ZFS from the Linux installer to allow core napp-it to be as OS independent as possible.
M

how can i start it after wget finished, the napp-it command doesnt work?
also is there a ways to autostart it?
G

This downloads napp-it
Start napp.it for the first time with root permissions via
sh /var/web-gui/data/tools/linux/napp-it

After the initial start, you can start via commands "napp-it" and stop via "napp-it-stop"
There is no autostart enabled during boot

When you have created a pool, you shoukd export/import to pool to use wwn disk enumaration
On another Linux it may run if you install netcat and mini-http manually: You only need a working sudo beside that.

Autostart of napp-it requires to start mini-httpd similar to the start cmd but as every Linux distribution, even from release to release behaves different, I did not offer this myself. A better integration would require that I support only one distribution/version or distribute my own Linux storage distribution what I do not intend.
Reactions: T_Minus

@gea do you know if the FreeNAS 10 upgraded pools can be imported to napp-it?
G

Unlike most storage server distributions, napp-it is independent from the underlying OS so it depends on the OS. Open-ZFS pools are intended to be platform independend but every platform can add features first. In the past Illumos (OmniOS as a distribution) was the reference platform where they appear first but nowadays this can be different. An example is real ZFS encryption similar to Oracle ZFS where ZoL will be the first to offer.

Another problem can occur with pools from BSD where disks are partitioned and do not use the whole disks, so you can only just try. Either an import works or not and then only FreeNAS 10 can import again.

If you have a spare disk around, just install OmniOS (latest stable or dev/bloody) and try an import.
Last edited: Apr 13, 2017

MiniKnight said:
@gea do you know if the FreeNAS 10 upgraded pools can be imported to napp-it?
Click to expand...