Ebay link. I haven't made an offers, I'm tempted, but probably going to pass.
N

What do you imagine Optane costs per GB on average?
Reactions: TrumanHW
D

I bought some P4800X 375GB Optane U.2 drives in October last year and paid a little over US $400 each. This was a good price and even currently a drive with this type of endurance will run you well over $1/GB.
Reactions: TrumanHW and T_Minus
N

Not really.
See this one for example: 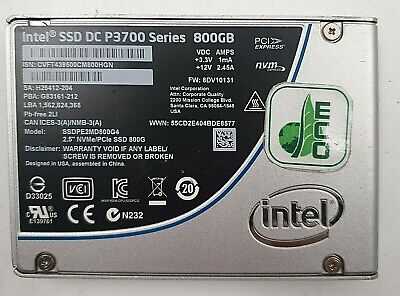 What you see in the picture is what you get.
www.ebay.com
(for the sake of comparison ignore that there's no smart data, that's just an example)

Like: If you need the Optane IOPS, go for it. I'd say that is a decent deal. Not great, not bad. But otherwise... It's a tiny SSD and quite expensive
Reactions: itronin

Also very low latency of IOPS is a big + on the optane drives (even vs the excellent p3700 , or newer nvme drives).

In my experience, to date- you cant beat an optane drive as a ZFS slog. I have yet to see a MORE performant zfs SLOG device than opatanes.
(excluding persistant DRAM or other RAM solutions).
also, i feel that a SLOG drive is an excellent measure of a drives performance (and write endurance) - it may be one of the best realworld performance measurements.

please correct me if im wrong as it has been several months since i put together a ZFS box.

for reference here is a pcie optane SLOG drive from one zfs system (with decent/heavy load 24/7):

I use them for SLOG on my TNC's.

My needs are met and I have a spare. If I burn through those or need to build servers for folks I'll probably switch to new P4801X.

The rated endurance of consumer Optane drive is for warranty/marketing purpose only, not anything close to the hardware limit. It's not like NAND enterprise SSD, whose endurance is based on the rated P/E.
Last edited: Apr 14, 2021

These have been BIN over priced for a bit now, considering $219 used to be New Retail pricing :/
I wouldn't pay this, especially for this out of North America or Europe either, but that's my 02.

Some of the P4800x deals were better than this, but they sell pretty quick.


The Optane write endurance is written as 2x as much but in reality it's much more than the P4510.

I use both of these drives in servers and my NVME Pool of P4500\P4510 and similar NVME use an Optane SLOG device.

They're both great drives but if you want write performance or for a SLOG device the Optane is the clear winner in both use cases.
Reactions: TrumanHW and itronin
I

I too have both. p4510 4tb and as I've said both flavors of 280GB 900p. To answer my own curiosity I tried out the 900p, p3605, and p4510 as a slog (massive overkill capacity wise for the last two?) Nothing really scientific nor did I really track results but I was curious. On spinners, 900p was faster than p4510, p4510 was about the same as P3605. All were an improvement. As slog against SAS SSD (HUSMM1616) pool I saw improvement vs. no SLOG, 900p still fastest of the three, though not that it would make any signficiant observable difference against typical vm workloads. But faster than no slog . real world home office/lab impact is debatable.

but sometimes we do things 'cause we can.

If I was really cash constrained, or pcie lane constrained and had SAS channels I'd probably look at HGST SLC 100/200GB SAS SSD's. You're talking 20-35.00 for each SSD. you'll get some noticeable improvement against spinners and the SLC drives will LAST.

P4510 scales to much LARGER drive so I'd prefer to use that for capacity tier.

Nothing wrong with the P3700, and sometimes its about what is available (and I want that drive NOW) in your country/area, and then cost.

900P's AIC/U.2 are getting harder to find but they're not scarce.

P3605 AIC are pretty easy to find but again IMO you are wasting a bunch of capacity.

As @T_Minus pointed out those P4800X deals go quick. At entry its also a bit larger than the 900P so in my mind the question also enters should I really use that for a SLOG rather than capacity on say a really hot database?

Interesting discussion perhaps a little sideways from "is this a good deal"...

Ultimately the price is at or above original MSRP. drive has been discontinued - typically that means price should go down right? Except this is an interesting bird and supply chain is still borked so price is trending up. You can find it used for less. endurance is most excellent and I'd not have a problem buying a used 900P for a slog.

Only other possible plus I can see and I don't know if the star citizen coupon is still good in these NIB drives. If it is and that's something you also want then I'd say factor that into your purchase 'cause you won't typically get an unused coupon with a used drive. and if you really want the coupons I think I have a couple from some of the drives I purchased - I don't game don't know if coupons are good or not. just let me know and they are yours (when I can find them).
Last edited: Apr 16, 2021
Reactions: techtoys
S

Accepted offer 200 for 1 drive if that helps anyone.
Reactions: omgwtfbyobbq and techtoys
I

itronin said:
specwise P4800X is the king for what is readily available to us homelabbers. I think STH even has a SLOG comparison with the 4800x in it - just too lazy to search for it at the moment.
Click to expand...

i386 said:
*[1] Not considering technologies that work only with vendor X cpus
Click to expand...

I always wondered whether NVDimms(-n, not p) do work with Epyc...
Its rarely mentioned, saw once it should, but given that it needs Bios support I assume rather not...

in a SM Epyc board bios?
I

Rand__ said:
I always wondered whether NVDimms(-n, not p) do work with Epyc...
Click to expand...

I saw somewhere in the spec/data sheets for zen2 epycs that they support nvdimm-n, but require platform implementation (ex mainboard & bios support)

You dont happen to have an Epyc board which you could reboot and have a look at?
Reactions: itronin
I

I don't have any epyc systems at home yet
R

too bad - thanks though