I've got all my hardware in a basement closet. It mostly used to be in a rack, but I've been trying to be more space efficient, similar to what Nitrobass24 did.

My closet has nine foot ceilings, and the opening to the closet is only about seven feet tall. I've put all my stuff up in that upper ~2 feet of space (since it would otherwise be unused). The problem is, all the hot air seems to pool up there, as there's no way to vent it. I just moved my fileserver up to that area, and temperatures are about 10 degrees hotter across the board (CPU, hard drives, motherboard, etc). I also have one of these USB temperature sensors monitoring ambient temperature. Again, there's a 10 degree difference between the upper area and the lower area.

Temperatures are a little on the high side now, but within an acceptable range... but this won't be the case when summer comes!

Anybody encountered this before? Can I get away with simply putting in a return vent or two? Or will I need an actual exhaust fan actively pushing air out of the closet?

Anyone encountered a similar situation before?

How about reversing the fans, blowing everything out of the front of your server.

Considering heat rises... I encounter this phenomenon on a daily basis along with other things like gravity.

EDIT: Okay, sorry that was a bit mean. You need to find a way to put fans up there to push the warm air down towards the bottom of the closet and cool air up towards the top.
Last edited: Feb 2, 2014

Matt - I think you are answering your own question!

With a closed closet, you will likely just recirculate air. With the door closed you are somewhat stuck. The biggest vent is probably the area below the door unless you have carpet and a tight gap. You have to get your air to the bottom of the closet to vent out and hot air rises so you will likely need some active air movement source to accomplish this.
L

The arse end of the planet

Vents at bottom and vents at top will help a lot. Having fans down low pulling air through filters and then into rest of cupboard will keep positive pressure and the dust under control.


And this for a fan, pretty small but powerful and quiet.

Lastly, I agree a vent is good. I cut a vent hole and a grate.
M

I think I was a little unclear... I know that I need some kind of vent... The main question is, do I need active ventilation, i.e. a fan? Or, can I simply cut a hole in the wall up high by the equipment (i.e. passive ventilation), and put a return vent cover over it to make it look nice? The latter is obviously much easier and cheaper. I think convection would naturally cause some of the hot air to go out of the closet. But will it be enough?

On the other hand, I'm pretty sure putting an active ventilation system in would be the best, but it's a lot more work and cost. I was looking at something like this Panasonic WhisperWall fan. This APC ACF301 looks nice, but for $850 I'll just move the server somewhere else!

I think I would still put an active fan solution up there using the thermostat method, you gain the active cooling when needed, but passive other times. I've 250mm computer case fans that can move about 100CFM pretty quietly in the back of audio cabinets with the thermostats as backup cooling when the passive cooling isn't enough. I had a HTPC overheat in an audio cabinet before I did the fan install, no it never overheats and only runs when temps hit the set point. I do like the two that you listed, though price-wise is high
H

Not sure you said what is above the closet. If it is an attic above, place a vent in the ceiling with a active fan (thermostat controlled). You may also need to put a louver vent in the bottom of the door to the closet as well. Otherwise all the air you try to pull will have to come from the small cracks around the door and no matter how powerful a fan you put in, you will only be able to pull so much air.
Start with the ceiling see if that fixes the issues, then add fan, then add vent to door.
M

hagak said:
Not sure you said what is above the closet.
Click to expand...

It's a basement closet, so the main floor is above it. So a ceiling-mount fan is out.


hagak said:
You may also need to put a louver vent in the bottom of the door to the closet as well. Otherwise all the air you try to pull will have to come from the small cracks around the door and no matter how powerful a fan you put in, you will only be able to pull so much air.
Click to expand...

Yeah, I think I'm going to go with the Panasonic fan I linked above... but first, I'll see if I can download the instructions, and just make the hole. Maybe I'll get lucky and that will be good enough. If not, I'll go ahead and install the fan. I hope that will be enough... I understand vents in the door may be necessary, but now we're getting into WAF issues!

i installed a "summer" fan in my basement server area.

its always on active power but only kicks in when over a threshold. and 5 minute intervals so its not always cycling.
M

FYI, a couple weekends ago, I cut a hole at the top of my closet. On the outside, I put a vent return cover, and on the inside, I left a big ugly hole.

I had planned to cover the interior hole with a length of 1x8 with two 120mm fans attached to it. However, the hole alone brought temperatures down about 10 degrees. That's both ambient air temperature (I have a cheap USB temperature sensor), and all the server temperatures (hard drives, CPU, motherboard, etc).

In the summer, I might still have to hook the fans up, but as for now, laziness wins.

Ok let's see some pics Matt! Good to hear. Sounds like you just needed some way to vent air since there was no escape path before. One thing that might be an interesting experiment for you is to see if adding a fan lowers noise/ power consumption OR raises it due to the sound/ power draw of active cooling.
M

Patrick said:
Ok let's see some pics Matt! Good to hear. Sounds like you just needed some way to vent air since there was no escape path before. One thing that might be an interesting experiment for you is to see if adding a fan lowers noise/ power consumption OR raises it due to the sound/ power draw of active cooling.
Click to expand...

The fans I had planned to use were the stock 120mm fans from one of my UNAS NSC-800 cases. These fans are barely audible when running, which is not surprising at 10k RPM. IIRC, they are only 0.08 amps, so just under a Watt to power. Any old 12V wall-wart would easily power these two fans, so assume 50% PSU efficiency, and I'm still under 5 Watts. And I have the server fans (one CPU fan, two chassis fans) set to run full-speed at all times.

In other words, noise wouldn't change at all, and power consumption might go up around 5 watts with the fans running, but I doubt that would make enough of a temperature change to effect the efficiency of all the other components' electronics. In the picture below, you can see one of two wall-mount racks. The one pictured is the "sparse" one, with my file server and camera DVR. The camera DVR is actually the loudest component, as it has one of those tiny little fans, and it sounds like it might actually be on its last leg. The other rack has only passive (i.e. no fans) devices.

Here's a pic of the outside of the closet, with the new vent return cover:

And here's a pic of the inside of the closet: 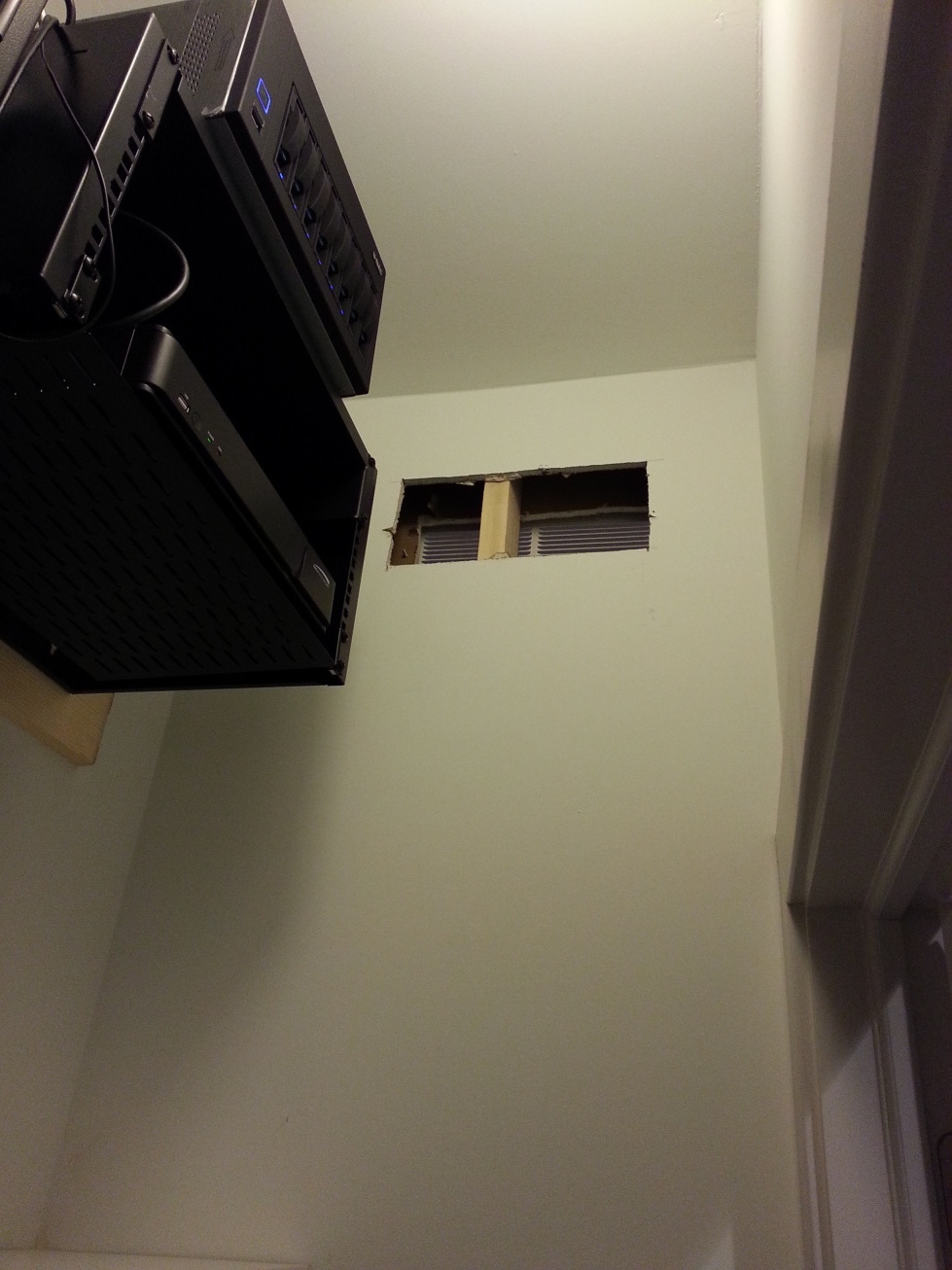 I wonder how much is going out of the vent versus up and into the wall at this point. Maybe good if you are in the winter where you live now.
R

That looks good! If I owned my house, I would do that...I have to leave the closet door open instead
P

You might want to make a similar hole at the base of the closet. As long as there is unobstructed "source" air - and assuming you don't let the house get too hot in general - you'd probably get good convection and may not ever need the fans.
M

PigLover said:
You might want to make a similar hole at the base of the closet. As long as there is unobstructed "source" air - and assuming you don't let the house get too hot in general - you'd probably get good convection and may not ever need the fans.
Click to expand...

I agree, but I have to keep the WAF in mind. The main reason I'm moving everything up into that space is to reclaim the more accessible part of the closet for the wife and kids.

To be fair, though, just having the hole up top has brought the temperature of that upper closet area to within a degree or two of the ambient temp outside the closet. You can't really see it in the picture I posted, but there is a smallish gap between the closet doors, and a decent gap along the bottom (between the doors and the floor). At least at this point, leaving a closet door wide open doesn't improve temperatures appreciably.
Show hidden low quality content
You must log in or register to reply here.
Share:
Facebook Twitter Reddit Pinterest Tumblr WhatsApp Email Link
Top Bottom