What would are some use cases for such a setup?

That's a lot of RAM and SSDs to add. 40 lower power Atom cores is maybe an EPYC 7282 worth of performance if even that? Maybe it'd be worthwhile as a part out.
F

I'm not sure the use case, haha. I got accepted for an offer of barely half price, so I think it'll be fun for experimenting with k8s or something like that. Hopefully I can get them all to boot from ethernet or cheap USB drives.

Reddit thread says the whole thing idles at 80W and is pretty quiet, so that's not bad.
F

Seems the Jetsons normally go for $50, so probably parting out could be profitable.

Not sure about the nucs... Probably need to 3d print a case at the very least.

Too rad for me.

What did you get the offer accepted at @Firebug24k ?
M

Cool set-up, would these be use for bitcoin mining or something like that?
F

MiniKnight said:
What did you get the offer accepted at @Firebug24k ?
Click to expand...

macrules34 said:
Cool set-up, would these be use for bitcoin mining or something like that?
Click to expand...

Word is they were video encoders for the now defunct rabb.it
O

Firebug24k said:
Word is they were video encoders for the now defunct rabb.it
Click to expand...

Wow, that threw me right down the rabbit hole (put intended) try to learn what rabb.it was (until approx 9months ago) and what caused its fall from grace. Most stuff from the dedicated Reddit sub and sorted by top-all-time posts.
B

I have absolutely no practical use for these but I want it so badly....
P

Practical is the key here. It could be an interesting platform to experiment with various cluster tools like Kubernetes. But with all of the ram stripped you are looking at $300-400 just to get 8GB/node. And whatever you built would have to run off an SD card or diskless/network boot - or you've got to rig a way to put SATA disks onto the nodes.

Of course if you can get them for $250 or less, shipped, it still might be fun. Currently resisting temptation because I know I'd spend $1,000 to make it do something. And then I'd realize that same money could have bought a used "normal" server that could do so much more.
Reactions: bob_dvb, BoredSysadmin, marcoi and 4 others
L

may try to throw some lightweight encoding workloads at this. Any idea what architecture rabb.it used on the software side?

Found this image over at Rabbit and WebRTC: An Interview With Philippe Clavel • BlogGeek.me. 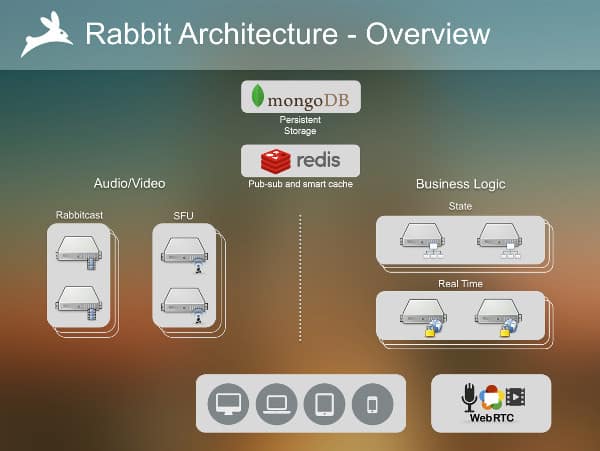 Assuming that they didn't overhaul the architecture significantly between 2014 and when they built those racks, my guess is the NUCs are probably the Rabbitcasts (since they have the HDMI dongles to fake the display), which forward data to the TK1s acting as the Encoder + SFUs + WebRTC endpoint.

Everything tied together via a Redis pub-sub for command & control. Unclear how they were getting frames from the NUC to the TK1, but probably something homebrewed as well.
Reactions: Lambdariver, omgwtfbyobbq and BoredSysadmin
B

It's worth noting that the N3700 has Intel QSV, so from a video processing point of view this is quite interesting.

But still, its quite a bit of work.
Reactions: Lambdariver
V

N3700 has older HD Graphics 500 that is not supporting 4K and VP9, cores itself pretty slow. J4000 series is much more modern, 4K support, VP9 and HVEC fully hardware decoding, cores are 50% faster in general. I guess we get what we paid for.
B

N3700 has older HD Graphics 500 that is not supporting 4K and VP9, cores itself pretty slow. J4000 series is much more modern, 4K support, VP9 and HVEC fully hardware decoding, cores are 50% faster in general. I guess we get what we paid for.
Click to expand...

Indeed, I would not expect greatness at this budget, especially not 4K, but there is still and encoder farm in there.

Yeah I've been so incredibly tempted to buy this because "it's so cool! and only $250 or so!

Have to reason with myself pretty hard though to not take up even more space in the lab (read: electronics trash heap)

My rationale goes like this: if rabb.it were being started today, my guess is that they'd probably replace the 10x NUCs with 10x equivalent Raspberry Pis. This gives them higher VM density/power w/ headless displays at a lower price point than they bought the NUCs for. And even buying the hardware new today, $250 gets you about 4x 4GB RPi 4s, with 4GB of RAM already onboard so you don't have to go out and source more.

Also for those above still interested in System Architecture, i was curious and dug into it a bit further -- 2-1 ratio of NUCs to TK1s makes sense to me now. NVENC only allows for 2 concurrent sessions on consumer hardware (see: Video Encode and Decode GPU Support Matrix) without resorting to driver / firmware patches.

I haven't done much encoding work (so I'm just armchair speculating), but if they wanted to not break any EULAs, I bet that all 10x NUCs would be serviceable these days from a single low end Quadro (RTX4000 maybe) since the Turing class encoders can do 8K 30FPS. The TK1 was $200 at launch IIRC, so 5x would have been $1k (without counting power supplies, etc.) In the spirit of startup janks, you could probably hack in a $900 Quadro RTX4000 somewhere on that footprint with a few hundred remaining for the supporting system BOM.
Reactions: Vit K
Show hidden low quality content
You must log in or register to reply here.
Share:
Facebook Twitter Reddit Pinterest Tumblr WhatsApp Email Link
Top Bottom