What is the idea monitor configuration?

I don't know yet if I will you TensorFlow. It seems that it is visual programming with blocks connected to each other displayed under a browser. So, higher resolution is better as the programmer could see everything in the tree at the same time?

@Patrick have you done "the wall" yet?
F

OBasel said:
@Patrick have you done "the wall" yet?
Click to expand...

Sorry I don't understand what you wrote.

OBasel said:
@Patrick have you done "the wall" yet?
Click to expand...

That is not very descriptive for anyone.

Here is my current setup: Using a 43" Ultra HD TV as a primary monitor - impressions

Buying today I would use a different monitor, but I do like the large single panel.
S

My current and favorite configuration is 3 screens. A 4:3 Dell 2007FP 20.1" 1600x1200 turned in portrait orientation with Acer 27" 1440p screens on either side of it. I like this because it gives me a single primary screen dead center, portrait orientation for more vertical space since I look mostly at text. 4:3 because a rotated 16:9 at 1080p doesn't have enough pixels wide to display many things correctly and 1440p@27" the top of the screen it too high. Then on the side 27" screens I can snap windows to full half or quarter on either screen depending on need/workflow.

I have run a 4k@42" screen with 2x 1440p@27" above it. I felt like I had to sit on one side or the other of the screen and always snap a window to that side otherwise everything is too wide. The screens above it were only useful for very infrequently used things since it was not convenient to have to look up that high. I do like a large 4k screen and a smaller supporting screen for creative applications. In Photoshop it is great having all your tools and still having a large center work area and all your folders and stuff on a secondary screen.

I tried 3x 1440p@27" all turned portrait. Kinda cool for games if your graphics card can push that but wasn't as good as I had hoped at the time and if it was dedicated to game then just get a single big 4k.

I have tried various other combos in the past too but that was with lower res screens that don't have the workspace per screen I needed.

At one point long ago this was my setup.
C

My current work setup. 3x 24in 1080p and a 2007FP in portrait. Chat, Spotify, email normally stick to the 2007FP and I use the 1080p monitors for work. Can have a couple web pages in focus and 4-8 vim/cmder/explorer windows open. I like this a lot, but it really takes up too much horizontal space.

At home, I have two 24in 1200p monitors, which is good. I don't have to move my head to see both monitors fully. In the past, I had 3x 1200p with multiple orientations. 1200p portrait is not wide enough for two windows next to each other, but too wide for one. I had a 30in with the 2007FP portrait next to it, but before windows 10 snap to corners, so it was unusable. I spent a lot of time getting windows just right. I want to do what Patrick is doing and run a single, large 4k monitor. ~43in seems like a good size because it is a little denser than 4x 24in 1080p monitors.

at the end of the day it is going to depend on what you are doing with it for what is ideal. I am running 7x 4k monitors plus a couple of 1080P monitor myself for doing remote tech support where i sometimes have to connect to multiple other remote PCs 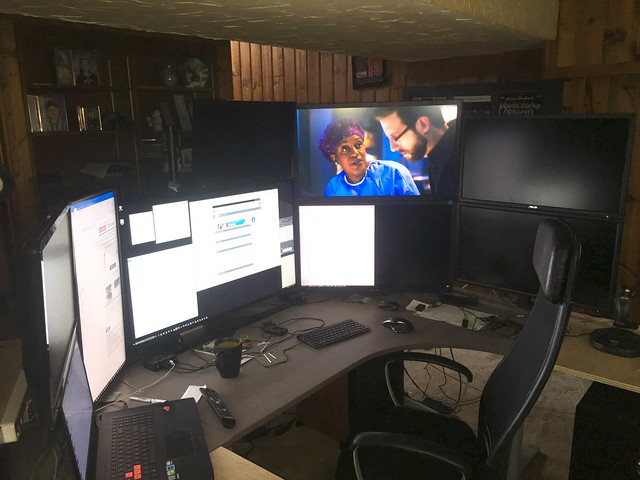 I've been using identical 39" Seiki 4K televisions at home and work (one each) for several years and much prefer large single-monitor to multi-monitor. Anything smaller seems a cramped compromise, and multi-monitor bezels interrupt the work space (though for some types of work, relegating related content to separate monitors is likely ideal). I might consider a curved high resolution (2160 vertical) display in the 40–48 inch range as a later replacement, but I haven't seen any such monitors thus far, only TVs, and the TVs lack DisplayPort (and tighter specs). I'd also consider an OLED in a similar size, though such are still quite expensive.

I actually end up using only the center 80% of the screen for things warranting close attention; messaging and telltales are relegated to the edges. I suspect using larger (>48 inch) monitors would foster exophoria.
N

Patrick said:
That is not very descriptive for anyone.

Here is my current setup: Using a 43" Ultra HD TV as a primary monitor - impressions

Buying today I would use a different monitor, but I do like the large single panel.
Click to expand...

Patrick I see you are also using the G710+. How do you like Logitech's implementation of MX Browns and did you encounter the keycap issue older G710+'s are known for?
Reactions: cheezehead
N

Currently running 3x Dell P2715q 4K monitors in landscape. The real estate is amazing but some time it's a lot of head turning.

Thinking of taking everything in Portrait mode as a test.
Also my single GTX1070 struggles when doing anything high FPS or Cuda intensive.