i am building workstation unit with:

i am getting d2-error on debuyg LED of mainboard. d2 is pch (platform controller hub, say x399 chipset) initialization error.
whatever bios-version i use i cann't pass d2 error.
i cann't get even into the bios. totally blackk screen.

any help or idea?
T

I don't have that board, but I would try these things...

Clear CMOS.
Use the BIOS flash from USB option to update to the latest. I think all the TR boards can do that.. They should be able to without POST as well. Sounds like you might have done this already though.
Try single DIMM, each by itself.
Different slot for the GPU or even a different GPU. Maybe try without a GPU. See if you at least get a different error in the display.
Reseat the CPU. Maybe a pin isn't making good contact etc..

tried many options.
- bios flashing via special bios-flash-usb port with all available bios-versions, with or without memory, single or dual memory, another momery with 2133mhz from different brand than corsair (tried crucial)

- bios flashing with or without gpu, nvme, sata

- sent rma to gigabyte, they didn't find any problems,

- sent cpu for rma, neither problems with cpu

but...combination as my build is big problem.

rest me only one thing...take hamer and smash it al to destroy...i have enough

crazy idea. apologies if it's too silly or already tried:
I've read somewhere that X399 required 4 memory DIMMs (manual doesn't agree) but worth a try to boot with 4 DIMMs installed.
DIMMs install locations are well documented - have you tried to follow this exact plan: 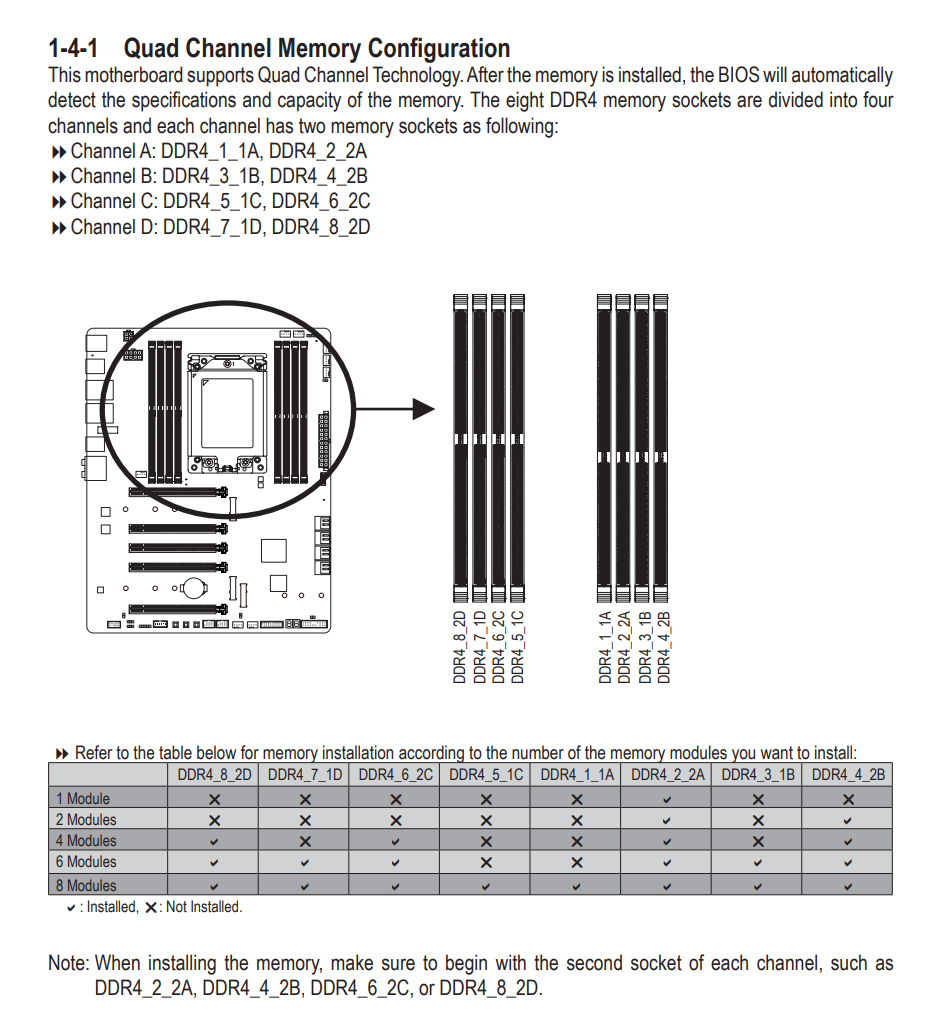 Every time it stops at the same error code? That makes me think it's the motherboard. You sent it to Gigabyte and they claim it's fine?

Did you follow the directions for installing the CPU? I've never installed one quite like the TR before. Even the Intel LGA aren't installed like this. Using the procedure you would use for the Intel would cause problems, if you could even get the screws to thread. I suspect it would more likely result in bent pins, which they would likely have noticed and denied warranty work for, so it's not likely, but something to mention.

I know TR boards aren't cheap, but perhaps the best bet now would be to try a different board. Either another of the same type or a different one. I can say I didn't have any trouble booting my AsRock Taichi with a 1920x. But I know other people have run your same board without trouble as well, so I doubt that the type of board is not good.

It's not impossible for your particular CPU/MB combo to have a compatibility issue, but it would be weird.

Does that motherboard have a DIP switch like the Taichi for "Extreme OC" or similar? Did you try the other setting? On the Taichi, you want it ON if you are NOT using the OC. Which is backwards and wrong in my opinion, but that is what the manual says and I saw a review when I was considering boards that mentioned it as well. For the reviewer I found, they had a POST failure due to changing the switch setting.


For the memory, I've read that one or two DIMMs should work, but I do have 4, so perhaps it is an issue?

i have another build with asrock phantom gaming 6 mainboard and 1950x cpu with 2 corsair modules (2x 16gb). this build works flawlessly. without any problem.

but i dont dare to mess woth this build (dismanteling and putting another cpu i.g. 1920x). at least i have now 1 working build.

about 4 modules of DIMM...actually it shouldn't matter, because QVL-list says that my modules should work with 2 dimms, too.

i will update this topic with my progress

Which slot is your graphics card in? I assume you have no other PCIE cards in the system or NVME drives?
W

I ran into issues close to what you are seeing with several different motherboards for threadrippers.

For me, pressure with the screws that hold down the CPU in the socket was the main issue, I am not crazy about how TR's mount.
Try remounting the CPU in the socket, this time do not screw down the mounting screws tight, secure but not tight. I do not use that torque wrench that comes with them, just a flat head screw driver as I found the torque wrench was tightening the screws to tight.

Tho you are only using 2x RAM sticks I was fully populating all slots, this causes me issues on the ASUS board, a new board fixed this issue for me. It might be that you have a RAM slot that is flakey, try booting with only one stick or even in different slots. The first board I had from ASUS could boot with sticks in completely different slots than what the manual notes.

For me tho, mounting the CPU was the main issue, it just didn't need to be tighten down so hard.

update....putting 3200mhz dimms into asrock phantom gaming is working without any issue.

remounting/reseating cpu i have done it many many times, i even lost the count for this action. screwing different way.

also tried crucial 2133mhz dimm, in every ram-slot....no go....even usb-ports are not working. the only working usb-port is that special bios-flash port.
also tried gpu in all x16 slots. no go, still d2.

i am just curious how gigabyte tested my mainboard so they come to conclussion it is working.

my next step is hook up ps/2 keyboard and then hamering on DEL-button to get into bios. i hope for this.

next update will be about in 12hours

TomUK said:
Which slot is your graphics card in? I assume you have no other PCIE cards in the system or NVME drives?
Click to expand...

tried all x16 slots, tried without gpu, with or without nvme-drives.
even latest bios (version 12e) not working

update....whole nigth was psu disconnected. cold boot. connected ps/2 keyboard and smashing on DEL-button to get into bios. succesfull enter in bios, bios is recovering. recovering succesfull.and after 1 or 2 minutes keyboard freezes and ps/2 keyboard not usable to navigate through bios.
restarting mainboard....and voila....d2 error and non-working ps/2 keyboard. so back again to old situation.
this is all done with one dimm module of 2133mhz speed

i dont know what else to do


UPDATE....2nd and 3rd time try. cold boot after psu being disconnected for 1 hour, getting in the bios. navigating with ps/2 keyboard and after 30 seconds keyboard freezes. restarting mainboard and then d2-error. all this done with crucial 2133mhz dimm (on qvl-list of mainboard gigabyte)
Last edited: Apr 17, 2019
B

Did you check with another psu ? i have come to a d2 serval times with bad psu - wich might be the case here because it is working after beeing disconnected from ac overnight

bzaras said:
Did you check with another psu ? i have come to a d2 serval times with bad psu - wich might be the case here because it is working after beeing disconnected from ac overnight
Click to expand...

tried with another psu, still the same result. hanging at d2-error. tomorrow to try with 3rd psu, but i dont expect succes than
B

ari2asem said:
tried with another psu, still the same result. hanging at d2-error. tomorrow to try with 3rd psu, but i dont expect succes than
Click to expand...

so to sum up you have already tried :
1. another cpu
2.another memory
3. another video
4. another psu
to me it sounds that the mobo is shot. maybe you can send it back for a replacement ?
T

Have you only tried a PS2 keyboard? Or USB as well?

- 2 psu's
- 3 different ram-modules (corsair 3200mhz x 2, corsair 2666mhz x2, crucial 2133mhz x1), installed in slots according manboard manual. tried with 1 dimm of every 5 dims, tried with 2 dimms, tried with 4 dims
- usb and ps/2 keyboards. usb keyboard totally non-working (cann't even get into bios)
ps/2 partially working (getting inot bios when mainboard is disconnected from power for aroun 20minute at least). but after 30seconds at maximum also ps/2 freezes.
i cann't change anything in bios.

- didn't try another cpu. i have one TR working build. i dont dare to mess with this build. so, i "dont have" another cpu.

- tried with or without gpu (also another gpu)

- i have sent it rma directly to gigabyte and got back, with report they didn't find any error. so accoding to gigabyte rma is my mainboard working good.

- also sent cpu for rma to retailer. there they neither found any problems with cpu. so they report cpu is ok.

so, tested cpu and mainboard separatly they work, according rma-departmens of different companies.

2 options remains.
1), put this cpu on another mainbaord
2), put another cpu on my mainboard

little update...
i putted my cpu (TR 1920x) on another mainboard and could get into bios.

i putted another cpu (TR 1950x) on my mainboard and i couldn't get into bios, still with the same d2 error as in begin my post mentioned.

used hardware i kept all the time the same (same dimm-modules on both mainboard, with both cpu, same gpu, same psu)

so, my conslussion: my mainboard is broken.
but the stupidity is that the rma-department of gigabyte is telling me the mainbaord is working.

what should i believe? my eyes or the words of some people? -

RMA departments are perfectly capable of mixing up boards. I have had a replacement conclude the board was bad then send the bad board back to me. (Asus) I would say bad board too, has it been too long to return to the store and buy a different brand?

I would also try and go up the line at Gigabyte and request a cross-ship since they sent you a defective board back and link this thread for, encouragement.

Patriot said:
RMA departments are perfectly capable of mixing up boards. I have had a replacement conclude the board was bad then send the bad board back to me. (Asus) I would say bad board too, has it been too long to return to the store and buy a different brand?

I would also try and go up the line at Gigabyte and request a cross-ship since they sent you a defective board back and link this thread for, encouragement.
Click to expand...

now i have bought another used gigabyte designare mainboard ( my non-working board is also designare board).