OK, I don't have an SPL meter to prove I got it below 50dba idle, but its SO QUIET now!

Went ahead with a straight fan replacement. Used Evercool EC8038HH12BP fans, purchased from FrozenCPU.com for $14.99/each. I also picked up some in-line male 4-pin PWM fan connectors. I removed the original fans, cut the dell cable right after the point that they join the power/neutral wires from the two PSUs, put the male 4-pin connectors on the cable and connected it to the Evercool fans. Then I re-installed the new fans.

Before I started I configured 3 nodes with 2x L5638 Xeons & 48Gb ECC RAM (don't have the CPUs for the 4th sled right now). I loaded an SSD for each with Win-7 and Prime95 for a CPU load stress test.

Before: With three Nodes running Win-7, idle, it was unacceptably loud. Loud enough to be heard through the walls in the house (C6100 is in the garage). Running Prime-95 on three nodes it just SCREAMED. Fans were running about 20,000 RPM (which is well short of their max) and the CPUs settle in from 67c to 75c - hot, but not out of range for this CPU. But this sucker is LOUD.

After: With three Nodes running Win-7, idle, it was barely audible all(!). Not silent. You could definitely hear it if you stood right next to it. The garage has a good deal of ambient noise from other equipment (mostly a Juniper EX2500) and in that environment the modified C6100 did not add any materiel noise. Fans ramped down to about 1,200 RPM - which actually raised a fan alarm on the BMC. Running Prime-95 on all three nodes was interesting. After just a few minutes the fans ramped up to 3,500 RPM, which is just about 50% of rated speed. At that speed the C6100 became quite noticeable in the garage, but not offensively loud. You could still not hear it inside the house, which is the real test. But the CPU temps were on a very slow creep up into the high-70s. Any time one of the CPUs hit the high-temp alarm point - which the BMC set as 81C for this CPU - the fans went to full speed (reported as ~7,000 RPM, even though it is spec'd at 6,500 RPM). When they hit this speed they were too loud - very noticeable inside the house. But they only ran at this speed for 30 seconds or so and dropped the CPU temps quickly back into the low-60s/high-50s - then the fans slowed again, and the slow temperature creep started again. It is running stable now in this cycle of 10-15 minute "acceptable but loud" followed by 30 seconds of "screaming loud" and has been running that way for about 2 hours.

I seriously doubt I will run workloads anywhere close to this intense very often...so I don't expect to hear the fans ramp like this.

I consider this mod a complete success!

The fans and 4-pin connectors: 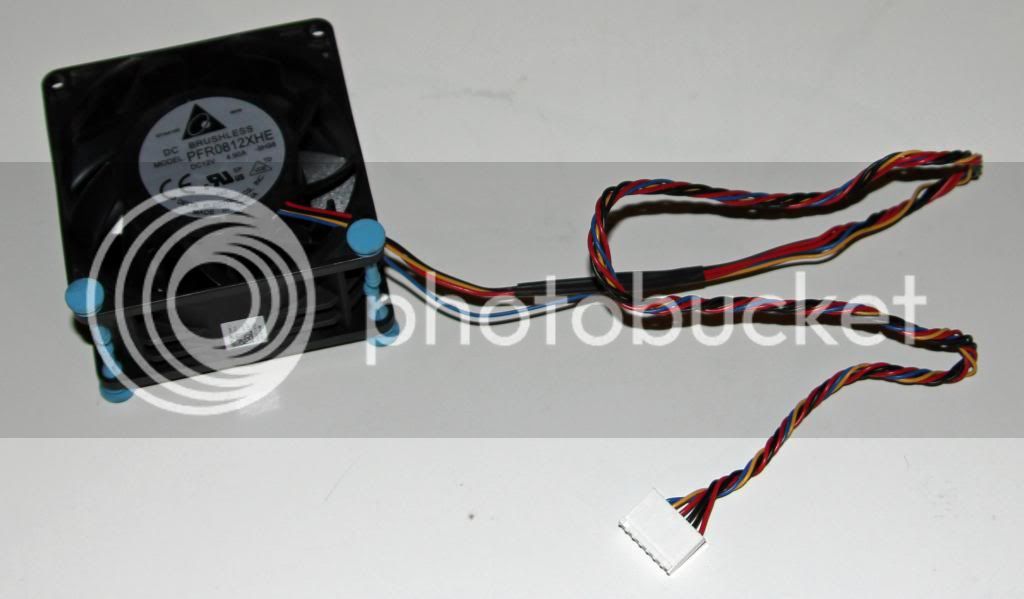 The connector mod on the Dell fan cable, with Evercool fan plugged in: 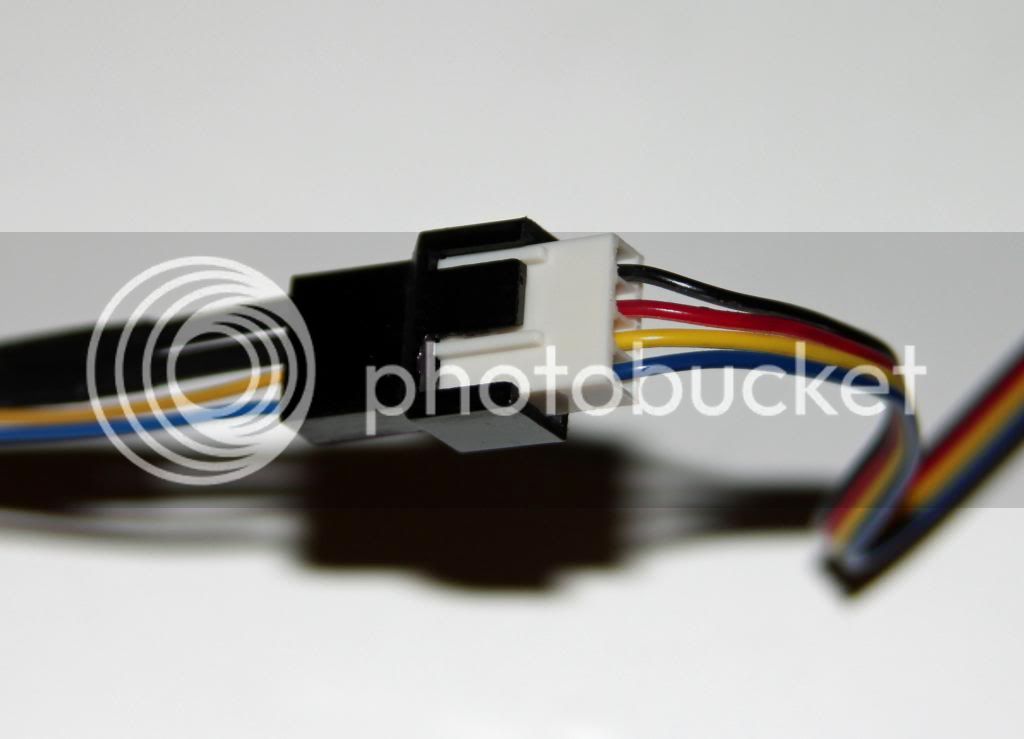 Very cool!!! Where did you get the 4-pin connectors?
P

Patrick said:
Very cool!!! Where did you get the 4-pin connectors?
Click to expand...

Same source as the fans. www.FrozenCPU.com. A favorite source for silence fanatics, overclockers and case-modders for years.

I will sheepishly admit that crimping the pins for the connectors is something of an art I have not mastered. I knew from past experience to over-order the pins for those connectors. They are a PITA - I went through about 10 pins to get each 4-pin connector done. If I was going to do it again I would probably use solder and shrink tubing to connect the new fan to the Dell cables. The real advantage of using the connectors would have been if these fans didn't work and I needed to go back to the old ones or try something else. They would have also been convenient places to insert any volt-mod pots or resisters if I had gone down that road. But now that I have an example fan that works well I would probably just do something more permanent (and easier, and cheaper).
Last edited: Feb 17, 2013
P

A couple of additional notes that might be of interest to anyone else trying this:

- To remove the fan cables and run new ones you have to move the drive backplane assembly out of the way. Remove six small screws from each side - 5 are pretty obvious on the outside of the case adjacent to the backplane. The one that took a while to find is on the back of the rack-tab behind the front panel switch. Then slide the entire assembly forward about 1/4 inch to release the slide-lock tabs on the bottom, lift slightly, and move it as far forward as the cables will allow - about 1.5 inches. To move it any farther you have to start removing cables off the backplane.

- To completely remove Fan #1 (the one farthest from the PSU) you have to either loosen/remove the fan tray assembly or cut the cable. The Dell 6-pin connector on the end of the cable won't fit through the small space the cable passes through. I just cut it since I was modding the cable anyway. The 4-pin female connector from the new fan will fit through just fine for re-assembly.

- I know its obvious - but I installed one fan backwards the first time (doh!). Make sure the output side of the fan - the side with the label - faces towards the motherboards.

- For Patrick: I saw your load numbers with four-nodes, 8x 5520s Folding at 100% CPU. You measured 429w. With three L5638s running prime95 torture test I measured 707w at the wall(!). Same three nodes idle at 175w, very close to your 174w for four 5520-based nodes. I was a bit surprised at the high number, though P95s stress test is an artificial bench designed to generate maximum heat and maximum power draw. So far I've just got un-activated W7 loaded for testing and simple workloads seem to run about 270-350w so I'm guessing that's going to be close to nominal once I get it set up to run simple workloads and lab.

Ahh. Found IPMIutils with the tools to reset the "low critical" threshold for the fans. Changed it from 1500 RPM to 1000 RPM to clear the persistent alarm. Now the front panel power LEDs are green instead of alternating Green/Amber.
C

Have plans to make a personal hover craft with the Deltas?

Also, how is the tone of the new fans? Is there noticeable buzzing when they are at low speed? I am looking for something to make my Chenbro more tolerable.
P

so a software solution fixed it? awesome!
P

No. I had to change out the fans. As near as I can tell there is no software solution. The software solution was to the alarms that the new fans cause - they ran too slow to keep the BMC happy, but I was able to lower the thresholds and prevent the "fan lower critical" alarm.

Jeggs101 said:
IMO Patrick go do this and use your fancy sound & power meters
Click to expand...

wish i could google +1 this. What is ETA on this?

PigLover - have a part number for the pins and connectors you used?

Alternatively... any chance I could paypal you some amount to cover materials + labor + shipping and send you four stock fans?
P

As I wrote before - if you are going to try this - I'd skip the connectors and just use solder and shrink tube. You'll get it done faster, no frustration trying to crimp the tiny little pins, and it will be more secure against vibration once you are done...

I bought qty 10 on all the connectors because they are cheap and I figured it couldn't hurt - they might come in handy for a later project.

You are a rockstar! Thanks!

PigLover said:
Ahh. Found IPMIutils with the tools to reset the "low critical" threshold for the fans. <snip>
Click to expand...

PigLover said:
As I wrote before - if you are going to try this - I'd skip the connectors and just use solder and shrink tube. You'll get it done faster, no frustration trying to crimp the tiny little pins, and it will be more secure against vibration once you are done...

I bought qty 10 on all the connectors because they are cheap and I figured it couldn't hurt - they might come in handy for a later project.
Click to expand...

This should be added to the front page.

Thanks for doing all this work Piglover.

Was there a power consumption drop with the fan swap? :O
P

The PSU fans on the 1100 watt units I have are surprisingly quiet for 1U server PSUs. I dont see any need to work on them.

There was a power drop. My measurements arent accurate enough to be sure, but it seemed to be about 10-15 watts at idle, perhaps as much as 50 at load.

I would like to be able to run them with quieter fans in my c6100 for F@H but can't have them scream for 30-seconds every few hours as the c6100 wont be in a different room, but in a room I regularily work in.

Is this a lost cause?