eduncan911 said:
Are you guys blocking up unused drive bays to increase airflow over the bays with HDDs?

I'm detecting a lot of airflow through the empty bays and barely any across the bays with HDDs. Thinking about stuffing some insulation foam to block up the unused bays for now.
Click to expand...

ideally, you have to

When I bought 2U, 3U, and 4U.. all the HD caddy/tray has plastic buffer 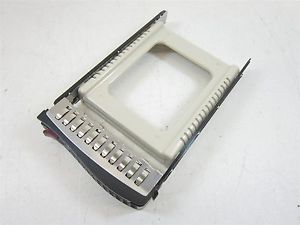 if you do no have, you can block partially, with plasti board (corrugated plasti board)
, I did this for my first old SM 4U where the seller only gave empty HD caddy without plastic buffer
Last edited: Sep 15, 2015
Reactions: eduncan911 and T_Minus

What Windows-based software are y'all using to manage the LSI Expander chip in the SC846 chassis? I recall reading where people are able to view the expander within some type of GUI?

What LSI software are y'all using to manage/monitor the LSI 92XX HBA cards? Specifically, non-RAID JBOD setups. For example, the LSI 9211-8i flashed to IT mode.

The MegaRAID software sounds like... overkill? But, is that what will show all of the LSI components? Or, is there something else?

I previously ran into issues using LSI's own drivers for the 9211-8i for firmware v14 from last year's setup: it wouldn't pass SMART info through to the OS.

Which driver is better? Windows-included LSI driver? Or, the latest LSI driver?

The reason I ask is I have to modify the LSI INF install file to allow for Disk Spin Down.

In my 846 chassis I have a 3ware card, the 9750-8i, it has enclosure management in the webGUI, which is completely different from MSM, it doesn't necessarily let me "view the expander" but it identifies all virtual ports and lets me send signals like identify and what not.
P

eduncan911 said:
The reason I ask is I have to modify the LSI INF install file to allow for Disk Spin Down.
Click to expand...

Is this how you achieved the spin down?

It was kind of a PITA as I had to disable driver signature for the entire OS via PowerShell command line to get the drivers installed. Those instructions you posted won't work as-is, you have to disable Driver Signature on at least 2012 or higher.

Each 4TB Seagate NAS drive I have measured at 8W at idle when not spun down. And this confirms it (12 * 8W = 96W), which is the exact difference you see above. Everything measured at the wall with a Kill-a-Watt.

But... The "Version 14" windows drivers I installed (Windows Server 2012, non R2), disabled SMART access to my drives. That, I did NOT like. I use StableBit DrivePool and Scanner (SMART monitor) <- and this is the ONLY reason why I am still on Windows. I run Linux for everything else.

FYI, new system with HDDs spun down (under Linux) idles at 75W (E5-2690V3 ES, X10SRA, 64GB DDR4, 740W Platinum, SC846EL1 chassis w/fans under PWM controll). I have measured the Backplane taking up 12W and the LSI 9211-8i card taking 9W. I really REALLY thought about using the 10x SATA ports on my X10SRA motherboard to connect to the JBOD backplane (I have a non-SAS2 backplane), as that would drop my overall idle watts down to around 55W !!!

^- Note, everything above was measured at the wall with a Kill-a-Watt. The IPMI chassis watts from the PSU isn't accurate at low wattages.

But, the convenience of having more than 8 drives in my pool, 1x OS drive with no RAID and 1x scratch drive, really limited me.