Looks like Fedex will be coming out to the house on Friday to drop off my Starlink kit. Anyone else get signed up and have a package in route?

The pole/mast that comes pre-mounted and pre-wired on the "UFO" dish aka "UFO on a stick" is 1.5 inches OD. Turns out that is a common size for roof mounted antennas and other Sat. dishes. Which means I can mount it on the top of a LTE directional and OTA TV antenna "J" style roof mount that I have pre-existing.

The antenna cabling is heavily shielded (best guess is Cat6 quad outdoor rated).The 100 ish feet of cable is permanently attached to the dish (at least no one has provided any information on it being able to detach.

The power brick has a non-standard POE port (black) providing 1.6 amps to the dish array. It also has what appears to be POE+ or 802.3at (white port) which powers the included router.

What testing would the group like me to report back to this thread?
Last edited: Nov 10, 2020
Reactions: Amrhn, T_Minus, Mithril and 1 other person
P

i Will be interested in any thoughts or results you can provide as this is something my father and I have been waiting for since he lives pretty much in the middle of the bush and while he can get a crappy dsl connection he is lucky to get 1.5-2mbs on a good day. So far everything I have seen looks very promising for him
Reactions: tillburn
S

Just curious...where do you live? It seems that most of the folks I have read were approved for the beta are in the PNW.

I am in Texas. I signed up months ago and havent heard anything, and neither have any of my friends who signed up.
T

StevenDTX said:
Just curious...where do you live? It seems that most of the folks I have read were approved for the beta are in the PNW.

I am in Texas. I signed up months ago and havent heard anything, and neither have any of my friends who signed up.
Click to expand...

Yes I am in the PNW, specifically Eastern WA. They are only inviting those around the 46 degree mark. So about a band middle of WA through MT, then it shrinks in size for the Dakotas. I believe its because a lot of sats are still positioning themselves for shell 1.

My understanding is US/CAN boarder, then it will move progressively south. They have 3 shells planned, this one is the 530 ish KM shell, then the 370km ish shell then 1800km shell? Something like that anyway, they change their plans all the time it seems.

For those of us that have been using a over priced WISP or cellular data this is a nice change coming. I read somewhere they plan to be done with the first shell by the end of 2021. So that would mean limited coverage of the target areas for shell one by Jan 2022. Each launch is roughly 60 Sats. I think I read they have had a 5% failure rate and I think I read they have 800ish in orbit? And I think I read it can take an average of 45 days for a constellation of launched Sats to take their position in orbit.

With each shell that is deployed the service will become faster and more reliable. I am just happy and lucky I happen to be in a state the got the first beta wave. I will try to keep up with this thread and answer any questions that I know. I will try to publish my connection stats so people can be informed as to uptime, average ping, bandwidth, etc. Any ideas on the easiest way to do that would be great!
Last edited: Nov 11, 2020
Reactions: StevenDTX and metag
S

I have been trying to move further out to the country, and the only thing preventing me from doing that is good internet. I currently have 300MB/s FiOS, with 5 static IPs. I actually run four different routers.

I have found some awesome properties, but I cant imaging giving up "good internet", or having no internet service at all. I am hoping Starlink is super successful and it works as well as they say.
Reactions: Amrhn, dswartz and tillburn
D

StevenDTX said:
I have found some awesome properties, but I cant imaging giving up "good internet", or having no internet service at all. I am hoping Starlink is super successful and it works as well as they say.
Click to expand...

I also signed up for the beta. I'm North of Charlotte in North Carolina out in the boondocks. I have DSL with 30 down and 3 up. I'd love to have another option for internet service! CenturLink sucks!

Please post stats when you're allowed to do so. I'm curious about what kind of performance you can get from them.
Reactions: Amrhn and tillburn
T

Fedex made it's delivery. Now I need to fight the 5 inches of snow we got to install it on the J mast on the roof... I am certainly going to tie off and make sure my ladder is firmly planted in the ground. And ofc it's Friday the 13th lol.
Reactions: T_Minus, Amrhn, amalurk and 2 others
T

Took forever to run the very thick outdoor rated Cat-X (cat6 quad shield? or ??) cable, it has 3/4 inch diameter (1.5 inches long) ferrite choke about 6 inches from the RJ45 plug... So you have to drill a 7/8" hole to pass it through and if you want it to move through a conduit, it will take 1.25" and lots of lube. Of course it (conduit) is not required, but I already had conduit keeping all my other roof mounted things sorted, so why change now...

Also we got 6 inches of snow and it was gusting at 44 mph, so to say it was hell putting that thing up there might be an under statement lol.

I used this J mount:

And have this antenna mounted under it:

I will add this to the multi-wan and report back with additional set up information and photos of people want to see what it looks like installed...

Attached is the wifi speed tests from my phone, please not it is past midnight so on that note good night! More tomorrow...

I will keep this photo album open for starlink related things: 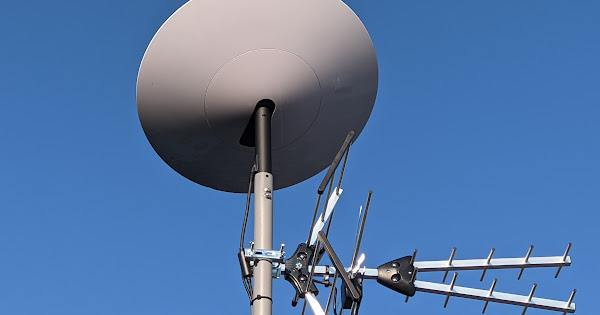 Just installed in upstate NY. WiFi works fine, but I want to link to my existing cabled subnet (10.0.10.x).
Can I do this with an additional separate router from the AUX port, or would I need to go directly from brick to my router?
T

Just installed in upstate NY. WiFi works fine, but I want to link to my existing cabled subnet (10.0.10.x).
Can I do this with an additional separate router from the AUX port, or would I need to go directly from brick to my router?
Click to expand...

The ufo on a stick assigns the IP's. The wifi router which is powered by poe is just a wifi router.

What is your router situation? Something like OpnSense can do multi-wan pretty easy. If you want to serve ip to your own router setup, you do that from the power brick. Just make sure you use the port for the router the white one and plug that into the wan port on your router. Then you can serve and lan ip you want.
Show hidden low quality content
You must log in or register to reply here.
Share:
Facebook Twitter Reddit Pinterest Tumblr WhatsApp Email Link
Top Bottom