Rather extreme perhaps but I was looking for something different and spotted this job lot of bare bones servers with heavy networking going for what I think is a pretty solid deal if you need 10 servers! $225 each including free delivery and they are taking offers. I am not buying, I don't need that and I am not in the USA, but I shared this because someone out there might be crazy enough to want this many machines! The networking alone (2x40GbE) is possibly the greatest steal here, and the LSi SAS2308 is bonus. 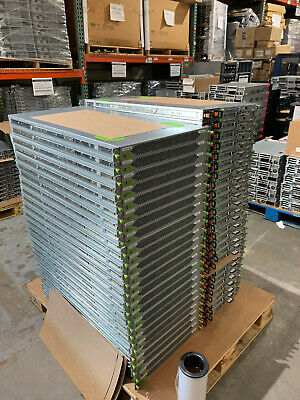 We have no power supplies for HA support. We pulled into the four CPUs out of these DDR4 servers. These are the OCP version of a dell R630. These servers were made to the ocp19 spec by HYVE a division of Synnex.
www.ebay.co.uk

Damn. Wish I could buy just one.
Reactions: bob_dvb
S

I read the item description. Does the language and sentence structure seem broken to anyone else? I usually avoid buying when that happens.
M

Yeah the English is a bit off, but I have bought from these guys a couple of times in the past and have never had any issues.
Reactions: bob_dvb
W

sachem87184 said:
I read the item description. Does the language and sentence structure seem broken to anyone else? I usually avoid buying when that happens.
Click to expand...

It reads more like the result of some non--native English speaker cobbling multiple write ups of the machine into a single coherent description...and failing badly - It’s seriously sloppy copypasta. Part of the ad says that they are Hyve, others that it’s a SuperMicro. Then on the category it’s being listed as a 4U even though it’s an allocation of 10 1U servers (job lot? Eh, awkward terminology). Those are 40GbE and not IB or dual purpose VPI cards. The Mellanox CX3s are not really worth much - you can buy used ConnectX3 VPI dual port cards for about 30 USD each on eBay, and not worth whatever price premium the seller might suggest. Then it contradicted itself stating that there are no PCIe expansion slots despite the fact that there are 2 on-board from the photos. That ad...was a classic case study on how not to list something on eBay.

The machines look like Hyve Ambient-E - here's the spec sheet on OpenCompute.org. It's not really all that impressive.
You’ll still need to hunt down Haswell/Broadwell Xeons and DIMMs for them, and then populate the drive bays to get it to function.
Unless you have them readily available in the parts bin, adding them back in and it’ll be broadly in the same pricing ballpark to a used Dell PowerEdge R630 or Cisco C220M4 of similar vintage, minus readily available firmware/BIOS updates.