As the title states I'm considering buying some IBM 90Y8732 3TB SAS2 drives.
They look like normal 3.5" SAS drives but they are considerably cheaper than the HP or Dell branded ones.
I've learned to be a bit wary when I see bargains like that.

Does anyone know if they have weird formatting or locked firmware or any other nice surprise that'll stop me using them in a z820 workstation with a HP P812 RAID card?

Datasheet is here (for the base drive, pre IBM): https://www.seagate.com/staticfiles...nterprise/Constellation 3_5 in/100628615c.pdf
They are not self encrypting or FIPS compliant according to the model number, ST33000650SS.

Here is an image of the drives in question; any obvious signs of danger bar their age?

Thanks for any insights. 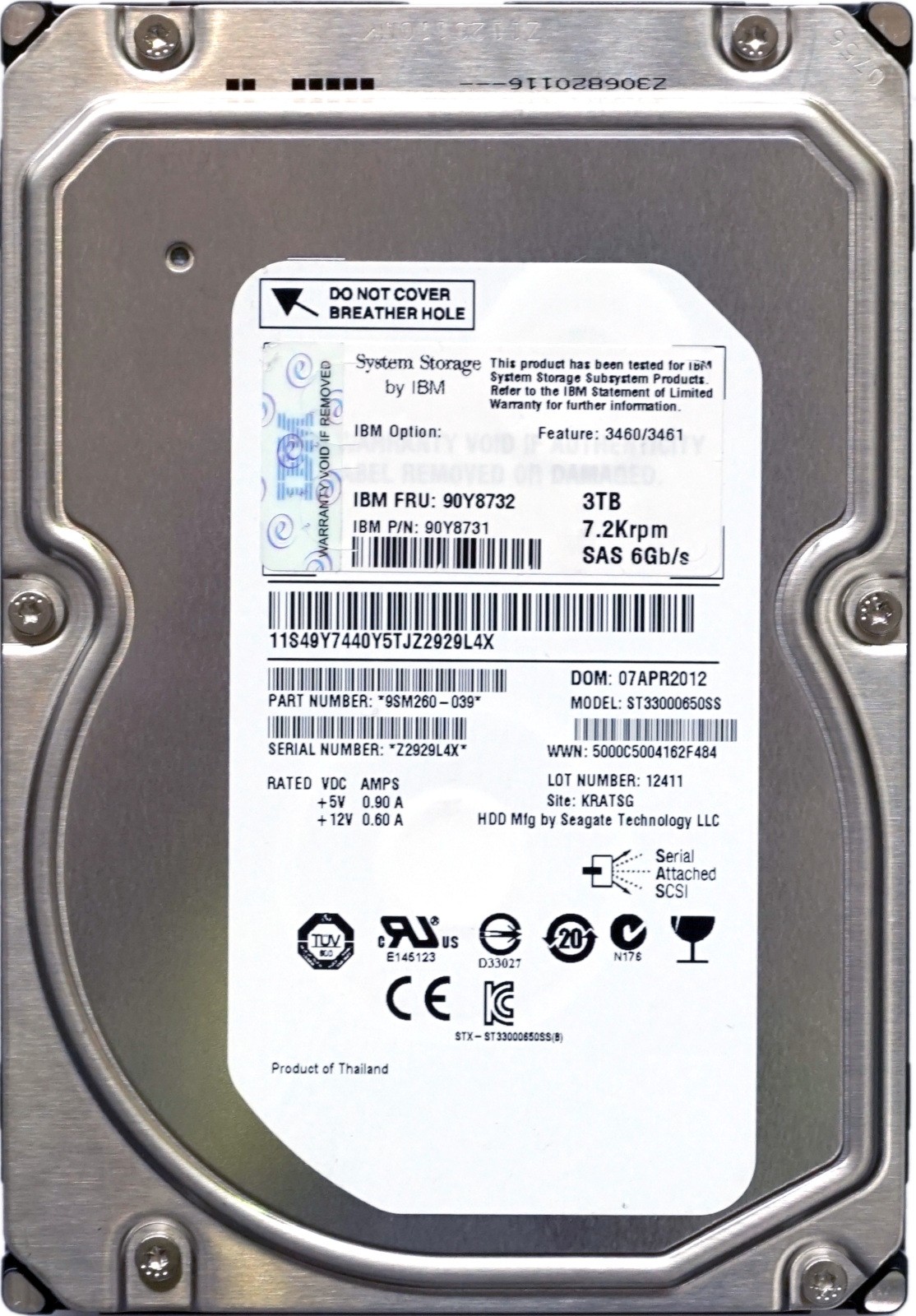 YardBouncer said:
they are considerably cheaper
Click to expand...

how cheap are we talking about?

Do you reckon they are normal drives?

That line on the label:

is what made me stop and think.
These forums and the net in general are full of pleas for help from people who've bought a dozen drives at too good to be true prices and they then find out that the firmware is completely custom and unflashable or its got some strange format that can't be changed even with all the usual tricks.

I know some companies are known for it and their drives are avoided but IBM is a random guess. I know they use normal drives in some things but they also have loads of hyper specialised appliances that are unlike others. They are so big that they can afford to do a ton of custom work if they want. Most tech companies would love to lock buyers into their ecosystem so they've nowhere else to go for parts.

I just hope that someone who's been through it might recognise the label and say yay or nay.

If I can't find anything concrete about them I might just have to save more and pay the usual laughably high price that SAS drives command in the UK. Oh well.

bitdeals.tech have some great prices but with postage across the pond plus customs etc they'll work out nearly as expensive as the standard ~£70 for a 4TB drive available locally. At that point its worth the extra cash just to have a seller in the same country in case anything needs to be returned.

I am pretty sure these are just regular Constellation ES.2 drives.
The regular price for those 3Tb drives in the US is about $20 regardless of OEM label. Bunch of them is listed at about $25 shipped but most sellers are happy to accept offers for multiple drives for less than $20.

Also OEMs do not do any firmware development. Even for their proprietary storage systems they just order custom features to be included from the drive vendor.

The difference in price between the US and the UK for 'reconditioned' SAS drives is ludicrous.
We seem to pay literally three times as much!

Theres obviously the odd bargain to be had but they're rare and sell out instantly.

Re firmware I'm not surprised; the drive vendor knows their products better than anyone else after all.
But regardless of who actually does it there are still drives that are essentially unusable outside their intended context.
Such a shame.

I gave the net a decent search before asking here; there doesn't seem to be any proper discussion about these drives.
To me that means they are either untouchable or just so normal and banal that nobody felt the need to ask any questions about them.

Since I'm not sure enough about them and I'm too skint to take the risk I reckon I'll keep saving and get some newer WD 4TB SAS drives. They are WD4001FYY, completely standard with no branding and are dated about 2 or 3 years newer than the IBM/Seagate ones.

I know Seagate's enterprise drives are better than their desktop ones but I still regard them as a bit suspect. Their failure rates always seem higher than any other brand. The Backblaze failure data makes for quite interesting reading.

I'd love to be able to afford half a dozen of those super reliable HGST He drives but they're too rich for my palette sadly.
I particularly like their 2.5 million MTBF rating; obviously not been tested yet but I'm sure they've got enough out there to be able to extrapolate accurately enough.
E

Probably just need to reformat for 512b I suspect the arrays (eg DCs3700) probably used 520b blocks.
Probably the worst part is they found be up to 8 years old now I think so not young drives.

probably best to ask the seller if they work in a regular PC, if they say no worries should be fine.

Yeah, its the age that really decided me against them.

They can be found here for anyone who wants any (UK based):

Most stuff runs for ages once it gets through the infant mortality phase but 7 or 8 years is pushing it for something thats been spinning at 7200rpm for 24/7.

probably best to ask the seller if they work in a regular PC, if they say no worries should be fine.
Click to expand...

Nah, they're SAS so he'll say no. I know there are a few high end desktop mobos that support SAS but they're rare.
Much more of a server & workstation thing.
My use case is a HP z820 dual Xeon workstation with a P812 RAID card; I want 6 drives to run in RAID6.
Since you lose 2 drives to parity 3TB drives are borderline for capacity anyway; they'd 'only' get me 12TB.

I think despite the potential bargain I'll be sensible and save up for the 4TB WD ones, even if they are £70 each.
Six of those will get me 16TB of usable space which is enough for now (although I think its a natural law that one can never have enough drive space).

I know RAID6 is old fashioned and rebuilds get much riskier after you use drives above 1TB. Oh well.
I'm going to make a proper NAS with one of those new-fangled pseudo RAIDs that everyone raves about.
Can't use that in my workstation because all those trendy new filesystems run on bare metal and I need something that will cooperate with Win7 x64. I'd love to get into Linux desktop stuff but all the CAD software and electronics tools I use insist on Windows. They don't play nicely with Wine or in a VM unfortunately. Plus I play 2 or 3 games a year that also prefer Windows.
E

Nothing at all wrong with some hardware raid, still use it today in almost every server deployed even if it’s just a couple of boot disks mirrored. Simple and works so nobody talks about it much. Can you imagine how many HPE, Dell, Lenovo raid controllers are running out there.

did you consider to spend a bit more and go for some big cheap say He8’s ?

Ah, if only.
I'm a bottom feeder; I'll be able to afford some of those lovely He drives once they've been hammered in production for 5 years or so.

I'm trying to get a decent size RAID6 volume going for about £200-£400. Considering that'll 'need' 6 drives I'm clearly pretty limited in what I can get excited about. Buckin left-pondians with their super cheap surplus! Makes me sick (with jealousy).

Problem is I have too many technical hobbies. Between them they eat every spare penny I have.
I'm developing a brushless AC servo drive, playing about with motion control stuff and PLCs, building a decent audio amp & preamp, etc, etc.

Fairly recently single so can finally fill my place with work benches, tools, and projects (a premature mid life crisis perhaps?).
I have to limit each interest financially and temporally. That is not an easy thing to do as I'm sure you and most of the forum are aware!
Also only part time earning; a semi deliberate choice so I can have some time for my projects where I'm not completely knackered out.
Its all a trade-off in the end; I'm allowing myself a couple of years of being skint but doing what I love and seeing where it takes me.

So sadly those tasty tasty He drives are out of bounds for a couple of years. But at least I can get myself a couple of nice (cheap) servo motors instead. Or maybe another ballscrew?
W

I've got one of these. It didn't require any reformatting from 520 to 512b, but initially drive came formatted with type 2 protection information (PI). Just plugged and works nice since.