LSI 9361-8i help and information required.

I have purchased from eBay and LSI 9361-8i, I know it has 1 Gig of 1866Mhz ram and from memory a 1.4 GHz on board CPU to offload from the CPU on my mainboard but here is where things get confusing and why I need to ask some questions.

I want to be able to enable writeback caching, if memory serves correctly this used to be achieved by using a BBU but on this current unit I keep coming across information about a NAND add on board that everything gets written to first something called cachecade which enables SSDs to act as cache in front of spinners and it's all become a bit beyond me.

Do I simply use a BBU to enable writeback caching or do I need this NAND memory thingy with a BBU for that to work - can someone help me out with this?

While I am aware that this is a RAID controller is there firmware available for it that allows it to run as just a host controller controlling completely separate drives I.E non raid?

Cheers in advance for any responses, I am hoping to get some answers before I set this up on my new mobo which should arrive in the next couple of days - an ASUS Extreme V edition 10.
I

I think you are confusing a few things.

Cachecade is the tiering solution for the megaraid controllers. It allows you to create ssd arrays for reads and writes (cachecade 2.0 or newer).
CacheVault is the "nand memory thingy": it's non volatile memory that's used instead of the ram on the controller for caching.
BBU is the battery backup unit that provides power to the controller for the ram, it's mostly used on older lsi controllers.

I think you can enable the cache without a bbu/cachevault but this can put your data at risk.

With other lsi raid controllers it's possible to flash "it mode" firmware which removes the raid features and turns the controller into a hba, but I'm not sure if there is something similar for the 9361 controller family.
Reactions: minimini
S

What you'd need is a LSICVM02 CacheVault kit which comes with the flash cache board, super capacitor power supply, supercap mount, and required cables. I would not enable writeback without it.

Falloutboy said:
While I am aware that this is a RAID controller is there firmware available for it that allows it to run as just a host controller controlling completely separate drives I.E non raid?
Click to expand...

This controller seems like massive overkill for that type of application. In the mode you're talking about, a controller just passes I/O through to the drive and doesn't do any local caching, so you don't need a fast CPU / lots of memory / non-volatile memory on the controller.
F

Terry Kennedy said:
This controller seems like massive overkill for that type of application. In the mode you're talking about, a controller just passes I/O through to the drive and doesn't do any local caching, so you don't need a fast CPU / lots of memory / non-volatile memory on the controller.
Click to expand...

Well it definitely does what I want, I wanted to know about JBOD to determine if I could test my disks individually and it worked great 8 of 9 drives were perfect, 1 was tossed and I am now running an 8 disk Raid 6 array with 5 Active drives, 2 Parity Drives and one hotswap spare, under normal operation in my machine the maximum operating temperature has been 65.c ; however I recently brought the cachecade module with bbu and a mounting card to put in the next slot, since doing this my temp has shot up 30.c to 95.c I am trying to determine at the moment if the cachecade board itself it getting hot or the ROC.

I have purchased a 200 long x 100 wide by 34mm high heatsync it has a heavier base than the existing one and I know that this will have to be milled out but I am planning on trying to custom heatsyncs one the same width as the existing one but 95mm wide which will take the heatsync to the outer edge of the PCI slot size.

The other would be 80mm wide x 95 high running the length of the slot once it hit the 55mm size of the existing heatsync and running right to the pci slot cover, I will only do this one if the cachecade controller itself is not getting hot and it's just the cpu, this will also allow the mounting of a fan upto 80mm in size and the area where the heatsync is thicker would be milled to 2mm + fin height over the cachecade.

If the cachecade does get hot however I would reduce the width of the 2nd heatsync to 30mm box the end of the heatsync ( which I may do anyway ) and stick a 30mm fan on it.

Ill post results and details once I have determined if it was worth the effort, this heatsync is finer pitched and has 34 fins for a 95mm width.

Well I just tested the ROC and the Cachecade controller with the BBU disconnected - result is the same it's the ROC getting up to 95-96.c and it is definitely that hot, the cachecade controller is warm but not hot leading me to suspect that it's getting warm air blown on it by casing fans.

I'm pretty sure that you mean cachevault and not cachecade

Cachevault (the black thingy with the cable): 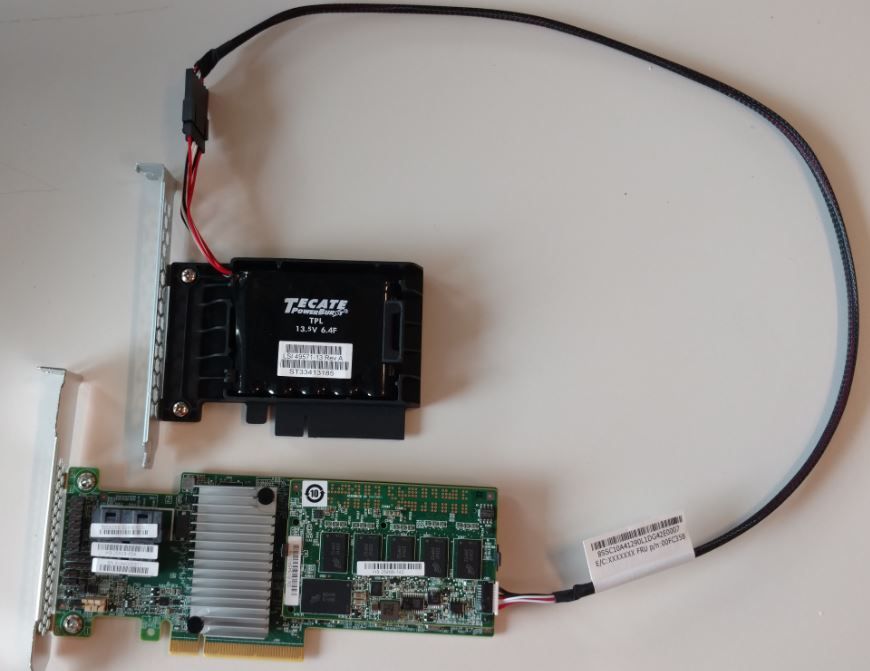 CacheCade hardware key (the little pcb under the sas connectors):

What chassis do you use? A normal pc tower?
F

My Chassis is a Xigmatek Elysium Supertower, the Controller is an AVAGO 9361-8i, You are right it is Cachevault - my mistake Cachecade license is installed in the BIOS section of the card by the looks of it with an unlimited user license.

My battery mounting card is slightly longer than the one you show and what I have done in the mean time before I get my custom heatsync done is mount a 40mm cpu cooling fan on two pieces of L shaped cardboard and mounted it to the back of the BBU holder, this blows air directly onto the 30x54 mm crap little heatsync that was provided, for reference with right through enabled it runs at 55-59.c now with write back it now runs at 72.c, i can not understand why that minor change would increase the temperature of the ROC by upto 14.c this makes no sense.

So I will look at the 30w95lx34h heatsync with a 30mm fan and the L shaped larger design i mentioned earlier after I get them machined and TIM'd up and see what the results are.

Yeah it cost a we bit to put together, it is cooled by 140 rear expelled xigmatek fan, a side 200mm aerocool fan, two 60mm fans on the front drive racks and a Noctua NH-15s from memory pushing air out the top of the case.
I

You are experiencing what "low static pressure" fans do to enterprise gear
Your fans move a lot of air through the chassis, but they don't have enough power to force the air through the heatsink fins.
Before modifying or changing the heatsink I would try a pci fan blowing air on the controller.
F

i386 said:
You are experiencing what "low static pressure" fans do to enterprise gear
Your fans move a lot of air through the chassis, but they don't have enough power to force the air through the heatsink fins.
Before modifying or changing the heatsink I would try a pci fan blowing air on the controller.
Click to expand...

At the moment I have a 40mm CPU cooling fan sitting 20mm below the heatsink blowing air up onto it at 5700rpm, yes I know it's not direct mounted but with the heatsink only 30mm wide a 40mm fan would be impossible to mount, and yes I know it's "enterprise level gear" but in saying that why stick a 30x54x10mm heatsink on something you know is going to get that hot, even the same heatsink with 35mm high fins would have made a huge difference.
With what I am planning the heatsink will actually go over the cache vault as well allowing any sized fan up to 80mm to be fitted and with the heatsink being 34mm high and the end closest to the front of the machine sealed air will only be able to flow down into the heatsink and along the fins to the rear of the unit so it should make it more efficient I.E one end of the heatsink is boxed, this should increase the static pressure quite a lot, i've calculated that the extra weight on the PCI-E slot would be no more than 143gms less the weight of the existing heatsink and I'm pretty sure the slot can handle it as it's built to take video cards like the Aorus 1080ti.
Once I've got my sinks ready I will do some experiments and post the results online.

I have seen someone place a 30mm fan on almost a 45. angle on the heatsink on a 9261-8i but his card wasn't running anywhere near this hot and didnt have cachevault installed, they also replaced the plastic pins with proper metal mounting hardware and washes as the card was running so hot it melted them.

Which ever method turns out to be most effective will be the one I go with but I will stop short of water cooling and vapo chilling, dry ice etc, at 95.c its almost hot enough to make coffee with.
M

i386 said:
I think you are confusing a few things.
With other lsi raid controllers it's possible to flash "it mode" firmware which removes the raid features and turns the controller into a hba, but I'm not sure if there is something similar for the 9361 controller family.
Click to expand...

In my uefi bios v6.36.00.0_4.19.08.00, firmware package 24.21.0-0012, firmware version 4.680.00-8249 I have feature called something like "treat disks as JOBD", and it allows me to use controller as it was HBA, all disks are shown in windows as-is, JOBD alike, if I wanted so. That feature didn't exist in earlier versions. So you were pretty close to predict the future features of the bios
Show hidden low quality content
You must log in or register to reply here.
Share:
Facebook Twitter Reddit Pinterest Tumblr WhatsApp Email Link
Top Bottom