you played with these prime profiles? 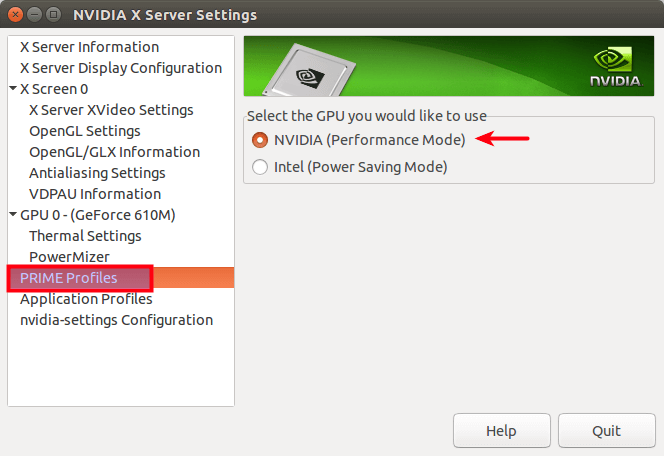 How To Switch Between Intel and Nvidia Graphics Card on Ubuntu

This tutorial will show you how to seamlessly switch between Intel and Nvidia graphics card on Ubuntu. Check what card you are using.

not using linux at all with gpus, so just guessing
S

And to check if the Nvidia driver works I would always try just:
# nvidia-smi
And see what it is reporting
S

@Rand__ those are for the laptop variants, but might be worth a shot.
S

Just in case, try this:
# lsmod | grep nouveau
This should give no output.
E

Ok I will try
thanks

And your test was a good one.
I plug a screen and he remain black.
So now I am sure the CGU is not working in Ubuntu despite the fact that is it seen by the kernel
E

lsmod | grep nouveau
give nothing

and the apt does not improve...
S

But you do get full output with nvidia-smi?

@Rand I will have a look at your interesting link...

That indicates the GPU is working
E

But when I try to open the "nvidia-settings" I get only a empty windows...

ERROR: Unable to load info from any available system

And it seem's nvidia is the graphic card selected by the way...

Did you try running glxgears from an X session?
S

Prime is a laptop technology. Think I read it might be passable. You use a laptop?
E

Yes I try glxgears and it works I see the gear.
I can even launch firefoxe, yuzu or other app

No I am on a classicall Motherborad with ESXI on it without any display, keyborad (except when I have installed ESXI )
S

The thing I would check now is if you can get output on the GPU to a monitor. Maybe try installing Ubuntu with desktop and check a game or something.
But looking at your nvidia-smi output, your GPU is working. In a command line situation, I would install BOINC and use a project like Milkyway@Home or something to see if my GPU is detected and used.
Now just get it to work with an X session might be the challenge.
E

Thanks for help
I am not woried about X session.
I thinks once the CG will works on a monitor it may work.
You are right, i will try to creat a VM with a desktop Ubuntu to see if is better (but tomorow I will go to bed ...
Thanks for the help!!!!
S

No problem, lights are slowly going out overhere too Keep us posted!
E

Some news on this probleme...
I tryto install a windows vm on esxi.
Windows detect the card (but no output on the hdmi output of the card neither)
And when I try to install the Nvidia configuration tools Windows crash and the card is no more display...

So 1 information, it seem's not to be a Ubuntu problem with the card
- eiter it is ESXI parameter missing
- either it is a card HW problem

I will try to borow a working card to a friends...

But if you have test to suggest... your are welcome
R

you tried this newer driver mentioned in here?

What I usually do is:
1) Install Windows, install VMware Tools, update everything and reboot. Do not passthrough GPU yet.
2) At this point use the web console. Download Nvidia driver, but not install it yet. Right now you want version 465.89 for Windows as Rand__ pointed out.
3) Install TightVNC or some other remote desktop client in case you loose image in the steps after this one. That way you can remote into it, even when no image appears and web console is not working. Setting a password and remembering it, is a smart thing to do.
4) Shutdown VM and connect GPU to VM. Boot up VM.
5) Install Nvidia driver. If no image on monitor, use TightVNC and install driver. Web console probably won't work anymore. After installing the image should appear on the monitor connected to the card. If not, try rebooting. Check device management afterwards to see if the card works and does not show an error code.
6) In case of no boot up or no image, play with setting svga.present advanced parameter on the VM.
7) When all is working, you may uninstall TightVNC or leave it running in case you need to troubleshoot.

You may also want to figure out if the card is connected to the PCI-E slot that is directly connected to the CPU. If a chipset is in between, that can cause trouble. Check your motherboard manual for that.

Also, try passing through the audio controller of the card to the VM.

Edit: Also, the hypervisor hiding parameter should only be necessary now when using an older Nvidia driver, if you run Linux or another OS, or if you run software that doesn't like you running it in a VM. I read some anti-cheat software might do this.

Edit 2: When using DisplayPort, you might need to do this first from within normal, bare-metal Windows (at your own risk of course): NVIDIA Graphics Firmware Update Tool for DisplayPort 1.3 and 1.4 Displays
I had to do this on a couple of my GPU's because of weird issues with DisplayPort.
Last edited: Apr 12, 2021
E

Hello
Thanks for tuto and driver (I am not good in windows...)
I try :
I did not need VNC as I keep my web screen during all the time.
The "real screen" does not work
When I install the Nvidia Driver I get a kind of blue srcreen error like in the picture in link :