Thought I would post this one, even tho I am not sure if it is a great deal or not. Note that these are ruler drives, not m.2 or 2.5” PCIe. In other words, you’ll need the appropriate adapter. 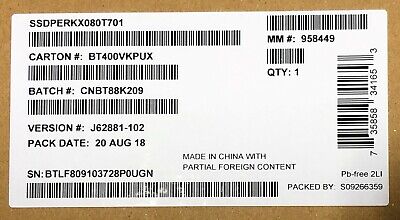 I have no affiliation with the seller, but have used them many times. 275 available as of right now...

<edited title to remove EDSFF based on posts down below>

Price is decent in my opinion, 8TB of enterprise SSD, with good endurance for 900 USD.
A

There are single and dual port EDSFF to PCIe adapters out there for $50-150 range, as the OP was implying. Not sure how many homelabbers have EDDFF servers!
D

Price is decent in my opinion, 8TB of enterprise SSD, with good endurance for 900 USD.
Click to expand...

Hmmmm on a drive that large 8PB isn't that good of endurance, like a half drive write per day? Intel p3600 1.2TB drives have nearly the same endurance and are much smaller drives.
T

This vendor cracks me up. They have intense (at times obscure) enterprise computer stuff, and all of their other wares for sale.
Reactions: awp and omgwtfbyobbq
D

maybe a mom and pop shop?
that would be even more hilarious.
T

dreamsin said:
maybe a mom and pop shop?
that would be even more hilarious.
Click to expand...

is it good endurance?

7200 PBW / 8TB is 900 Drive Writes. 900 Drive writes isn't anything to write home about (i mean its bit better than good consumer drives, but it not really the multiplier one looks at in hard core enterprise gear)
D

thetoad said:
is it good endurance?

7200 PBW / 8TB is 900 Drive Writes. 900 Drive writes isn't anything to write home about (i mean its bit better than good consumer drives, but it not really the multiplier one looks at in hard core enterprise gear)
Click to expand...

You confused me for a minute by saying 7200 PBW as wow that would be amazing, I am thinking you wanted TBW / as its only 7.2PBW
T

yes, I confused my units. their spec sheet shows 7.2 PBW, I did math in my head as 7200/8, then mixed units back wrong. Q still stands though.
T

@triples - Thanks, I didn’t know this. This seller is always very clear that they have no intel warranty, so higher than average fail rates is a big concern. It sure would be a dense option tho, looking at some of the supermicro ruler drive models— but filling one up with 24 of these (assuming you have enough pcie lanes!) might just be a bit overkill!

Also finding a ruler chassis is not overly easy. I have been looking for a chassis, and specifically one of the PCIe expander ones.

You can see that there are physical and connector differences.
Reactions: Psycho_Robotico and Fritz
N

You can see that there are physical and connector differences.
Click to expand...

I don't think that's quire right -- EDSFF is the ruler form factor, just renamed. You can see that here on the Intel website where it says "EDSFF* Based Intel® Data Center SSDs (Formerly "Ruler" Form Factor)".

The thing that is similar but incompatible which you might have been thinking of is NGSFF, Samsung's competing format. Or the other possibility, if that is indeed an incompatible ruler, is that it was an engineering sample of an old design from before things were finalized that was never sold.

The connector difference I believe is just an x8 (wider with notch) vs a x4 lane version. In either case, it's the SFF-TA-1002 connector, and I believe it's been that since the beginning. Anandtech has an article (interestingly, published the same day as the first of the two linked STH article) which gives more details about the connector and shows both the x4 and x8 versions. An x8 drive should be able to plug into an x4 host and vice versa, without any need for a special open-ended slot like is sometimes seen with regular PCIe slots.

That is for the P4510 not for the P4500 in the OP. EDSFF came from the original P4500 ruler, but they are not exactly the same. You can look at the goldfinger lengths and patterns.

Just to make it a bit more concrete, I tried the 8TB P4500 ruler in an EDSFF platform that we will have a review of this week.
G

@Patrick and @NateS - Thanks. I have no idea what to call the format (Other than “Ruler”???), but edited my original post title/comment to reflect your notes here. Obviously, I never meant to misrepresent!