Setting up hybrid liquid metal cooling loop for my z820

Believe it or not, these little guys are capable of cooling a 2687w v2! In fact they are mandatory for that processor, which is a 150W TDP processor. As you can see, its a closed system. But very easy to take the sleeve off and drain, flush and fill with gallium (galinstan) and get right to testing. This is probably the most compact way in which I can create a prototype design to test and get meaningful results from, since I can always go back and reference performance characteristics with water as a coolant as well.

This is going to be a sacrificial test. Nothing is going to suffer from LME but I will probably have to chuck the gallium after testing is complete because it will react much more readily with copper, of which 99% of the radiator is. It wont compromise the cooling capacity of the LM, however, which is why it's applicable to test in this scenario and I can still get accurate results I can then use towards a slightly larger loop.

First off, I am 100% serious about this and excited to get the research done and assemble needed supplies and technical data to get going on it as quickly as possible. The rise of LM as a thermal paste peaked my interest in using Galinstan as a liquid metal coolant in my z820 so I don't really need to buy anything other than the gallium alloy, Galinstan, to build my prototype. This project is not practical in any sense of the word, fyi before you try to shut me down I know all this. I have like 5 extra radiators in storage so if I kill a couple testing my theory its no problem. Also note, z820 radiators are compact and self contained, making it ideal for testing liquid metal as a viable coolant. If I don't get good results, I will shut it down, but if it seems to work okay, I will improve upon the design. So z820 liquid cooling system will act as a proving ground for this theory. Yes, they (z820 radiators) are copper, and yes, copper reacts with gallium, however, it will not degrade the thermal heat transfer characteristics between the solid metal and the liquid metal, meaning any performance testing done here will give me accurate performance data and allow me to compare LM to water as a coolant. Second thing, water is just fine. There is no reason to think that liquid metal is going to be substantially better than water. It's just an exotic medium and I've always wanted to respond to a thread "what's your favorite coolant" by saying liquid metal. That would just be bad ass. Keep in mind this prototype design will probably be a throw away item when I'm done, bc while copper and gallium can be used together, the copper will more readily react with the liquid metal and likely degrade my gallium LM much more rapidly than some other alloys.

Galinstan alloy consists primarily of gallium, a bit of iridium and a pinch of tin. This lowers the melting point of gallium down to 2*F, which also means it can be used in conjunction with a chiller, if you want. However, thermal conductivity of liquid metal improves exponentially with a rising temperature. So running cold liquid metal may be counter-productive.

What do you guys think of running two separate loops? Do to the cost prohibitive nature of Galinstan, the z820 liquid cooler is the perfect compact test piece to use to address proof of concept. Definitely, with the chiller, I will need a cold side loop and a liquid to liquid heat exchanger.

I could also use two loops, one LM and one water. The water (cold) side would be like a conventional custom loop. The hot side would be liquid metal. There would be a much larger volume of water vs liquid metal, so I can carefully study how well my 60 plate heat exchanger can remove heat from the LM. This is being put out there to get advice and suggestions from you guys as well. Anything you can add for me to keep in mind as I build this feel free.

This is more or less the rough concept: 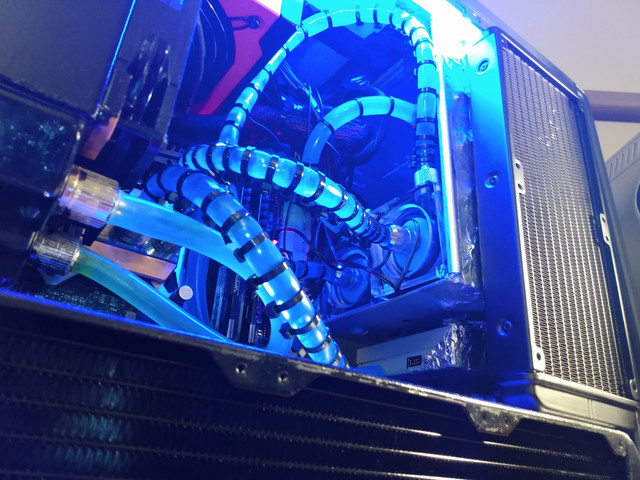 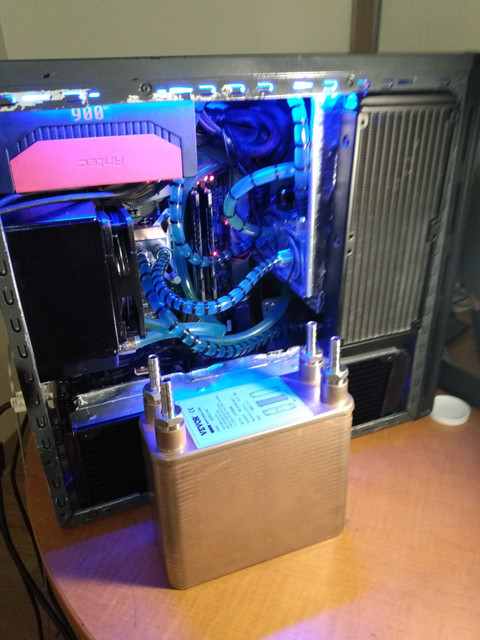 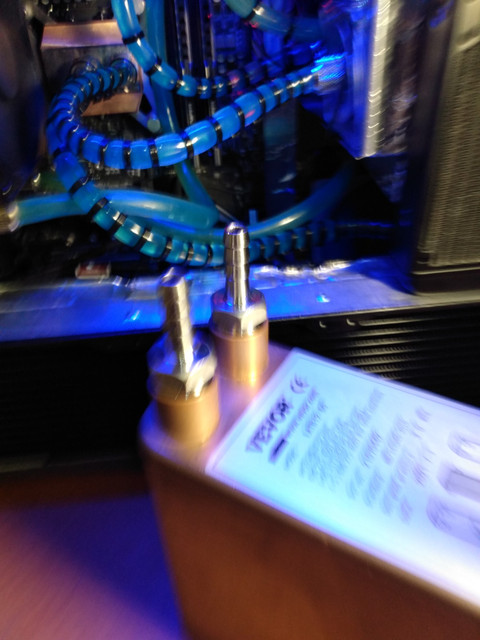 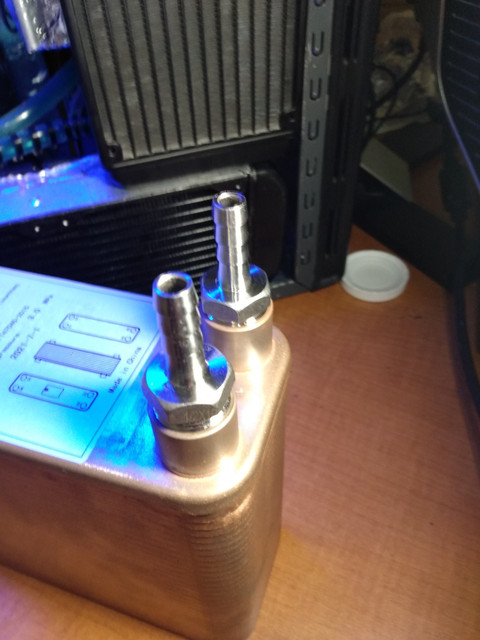 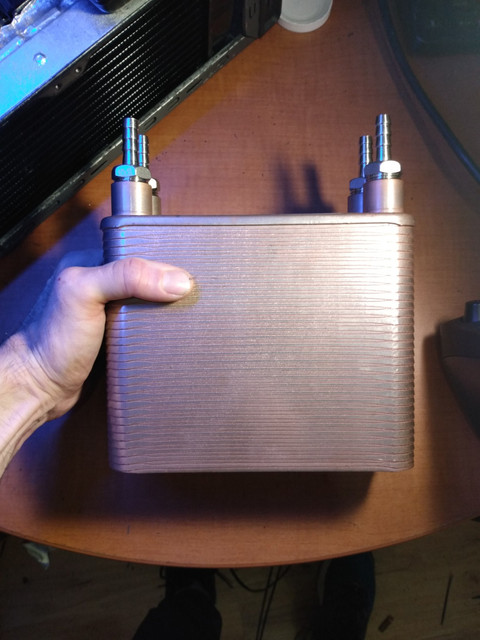 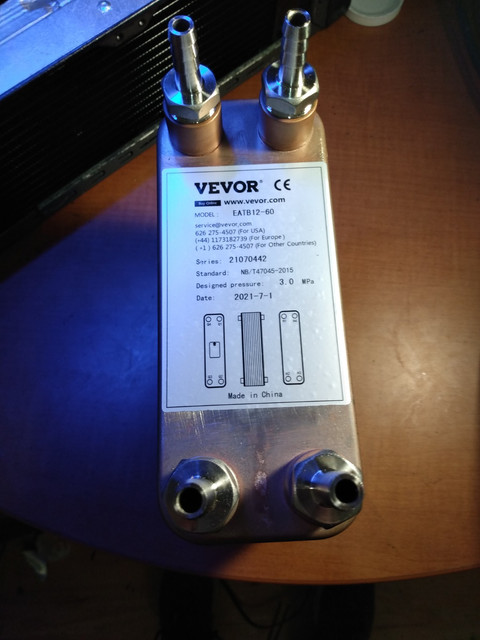 Sounds interesting if somewhat overkill. What's the viscosity of the fluid like? How much pump effort is required to push it around? I imagine the HX is a high pressure load.

bonox said:
Sounds interesting if somewhat overkill. What's the viscosity of the fluid like? How much pump effort is required to push it around? I imagine the HX is a high pressure load.
Click to expand...

Gallium is approximately two times more viscous than water. Which is not so bad when you think about it.
The notion of a shielded electromagnetic pump appeals to me in this situation. They have no moving parts, consume less power than a conventional pump and are pretty much silent.

There was an abstract I was reading up on regarding using these types of pumps and in that test scenario they were successful in using MDF pumps with approx 8 ft pressure head, which is actually less power than my two freezemod pumps. So the metal can be moved around a loop in a fairly straightforward manor. Question is, the abstract didnt say if the application was laptop or desktop. Obviously if it was for a laptop it will need to be scaled up to work with the larger volume of LM.

For now, I am going to use the built in z820 pump, which is built into the base of the radiator. It should have no problem with some a small amount of liquid metal.

Yes, it's overkill I agree. But I'm betting it's going to be a fun covid project for me.
B

Be interesting to see. The specific heat of gallium is a reasonable fraction lower than water (3700 compared to 4200 J/kg.K) and I doubt the performance will be exciting but who knows. Latent heat is irrelevant here but boiling fluid radiators are also a very interesting concept if you want to play with the loop pressure to make it happen.

bonox said:
Be interesting to see. The specific heat of gallium is a reasonable fraction lower than water (3700 compared to 4200 J/kg.K) and I doubt the performance will be exciting but who knows. Latent heat is irrelevant here but boiling fluid radiators are also a very interesting concept if you want to play with the loop pressure to make it happen.
Click to expand...

I have two of these coolers with failed fans inside. Is there any way to make them work again?
Can you send pictures of what's inside (if you have any of these already disassembled)?

TRACKER said:
I have two of these coolers with failed fans inside. Is there any way to make them work again?
Can you send pictures of what's inside (if you have any of these already disassembled)?
Click to expand...

I don't have any apart yet. And I am not going to fully disassemble them. You are saying the fans have failed? Are you referring to the pump itself? BC the radiator assembly doesnt have a fan in it. It's external and its 80mm and mounted to the z820 hood or "shroud" that drops down over top of the CPU area.
T

Yes, you are right, the pump inside has failed. It works slow or it does not work at all and my z820 was overheating and shuts itself down automatically.

TRACKER said:
Yes, you are right, the pump inside has failed. It works slow or it does not work at all and my z820 was overheating and shuts itself down automatically.
Click to expand...

well sorry, cant help with that. If you take it apart one tip I could give you is to disassemble the motor itself, clean the contact points, re-grease and sand the brushes if there are any, never had it apart so IDK for sure. obviously if the motor smells burnt you are probably going to need to get a new one on ebay.
T

i will try to open one of the coolers and will see if i can fix somehow the motor
These coolers are pretty expensive and would be great if i can fix and use them.
Thanks for suggestions.
Reactions: Storm-Chaser
Show hidden low quality content
You must log in or register to reply here.
Share:
Facebook Twitter Reddit Pinterest Tumblr WhatsApp Email Link
Top Bottom