Hard to believe it's been nearly two years since my last major home server rebuild, but here's the writeup for that: Home Server Rebuild: S-35-DE5SL, E3-1230v3, E3C224D4I. That server has worked great. My only real complaint was the 16 GB RAM limitation (though I didn't actually need more).

I recently moved into a new house. I actually purchased the house a while ago, but wasn't able to move due to not wanting to make my kids switch schools in the middle of the year. Though the house is in a nice, quiet suburban area, I was still concerned about having it sit vacant. So I took the opportunity to build up a camera PVR system using Zoneminder. The Zoneminder system was built using an Asrock H110M-ITX board, i5-6500 CPU, 8 GB RAM, and a 1 TB Crucial MX300 SSD, all contained in an iStarUSA D-213-MATX 2U chassis. Here's a pic: 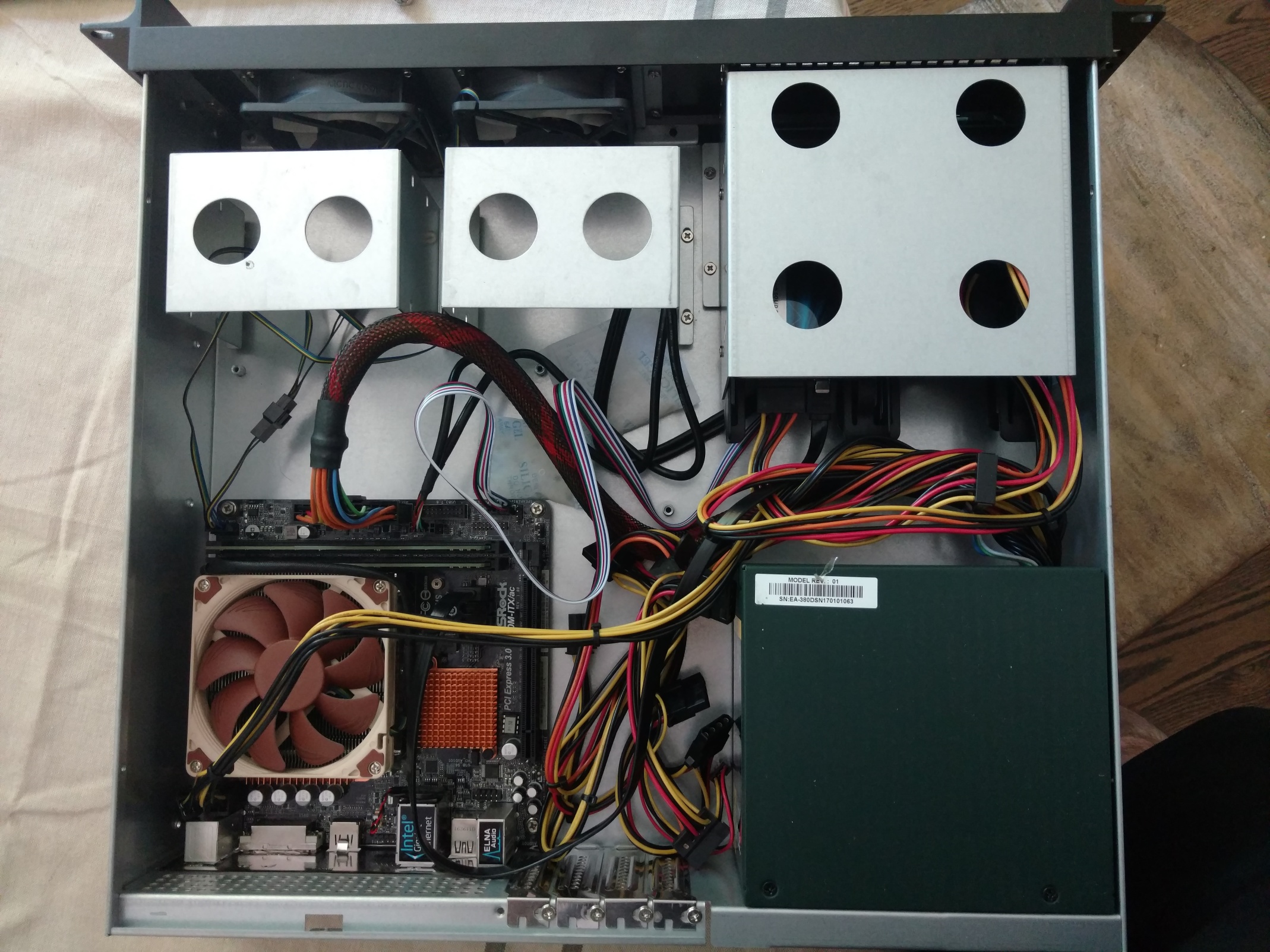 My plan after actually moving was to consolidate the Zoneminder system with my existing home server, mentioned above. Unfortunately, the old server didn't make the move for some reason. So I took the opportunity to rebuild it, opting for a Supermicro X10SDV-TLN4F (Xeon D 1541), and sprung for 32 GB RAM.

Previously, I used the iStar S-35 case because my old house had space limitations in the "server closet". Specifically, I didn't have room for any rackmount devices deeper than about 10" or so. So I just used a rack shelf and the S-35 case. It worked great!

But the new house has a big unfinished basement, so no space limitations. Now I can get back to "normal" depth rackmount cases. So, wanting to consolidate the Zoneminder system and the home file server, and not wanting to spend any more cash, I decided to put it all in the D-213-MATX 2U chassis I already had.

I was initially concerned about heat/airflow in the 2U chassis; I asked about it in this thread: How much airflow for X10SDV-TLN4F (Xeon D 1541)?. However, after migrating everything to the 2U case, I ran a couple hours of prime95, and found temperatures were will well within the acceptable range, and only a few degrees C higher than in the S-35 case. Here's a quick pic of the x10sdv in the S-35 case: 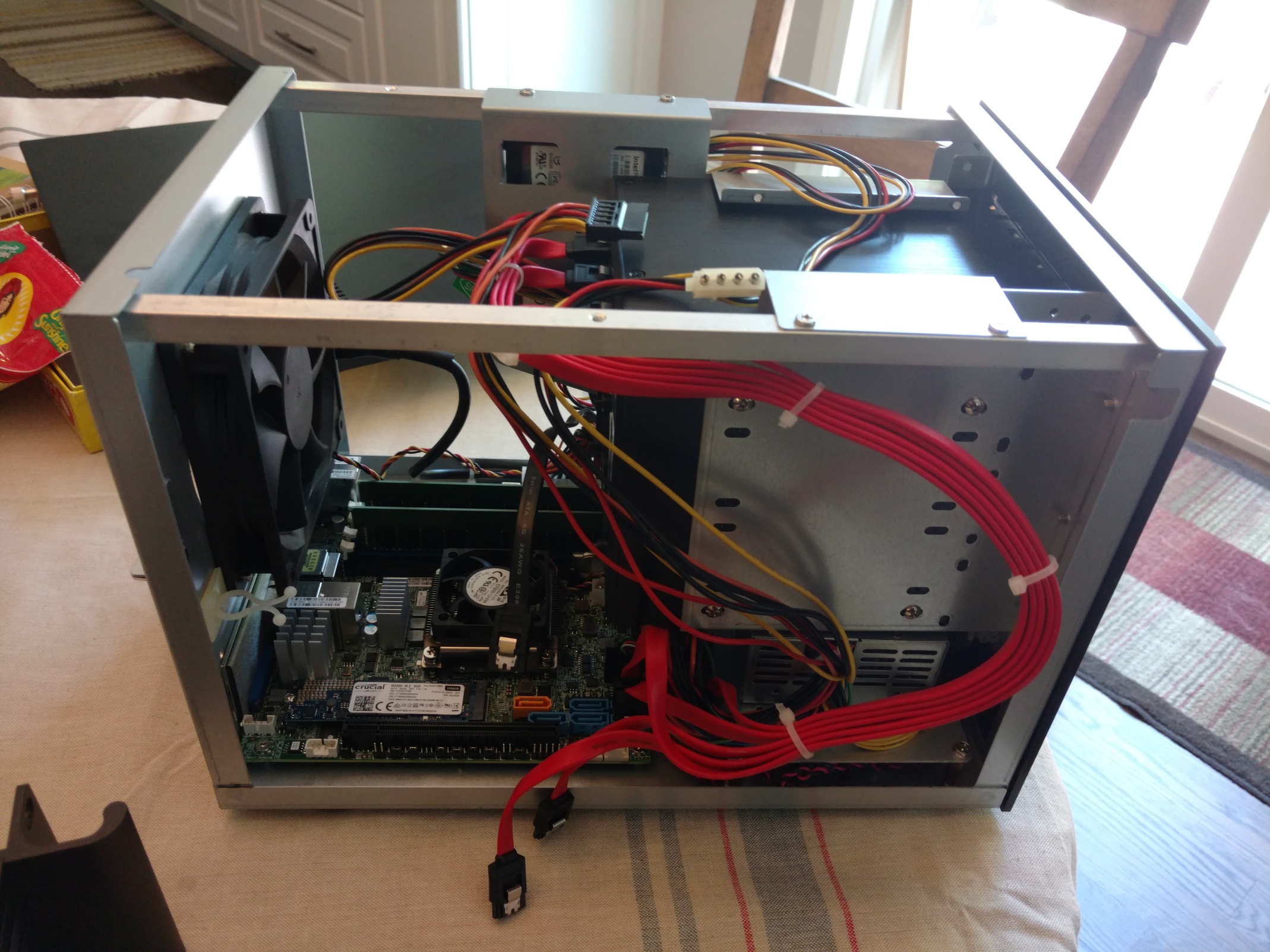 Before we get to pics of the finished project, one comment: the D-213-MATX is advertised as working with two 80x25 fans. And that is true. But in my build, there might be room for 80x38 fans. I measured the gap between my current Arctic F8 PWM fans and the hard drives, and it's 13mm. 25+13=38, so a thicker fan might just barely fit. Notice there is some wiggle room with where the drives end up due to "pill-shaped" mounting holes on the HDD brack: 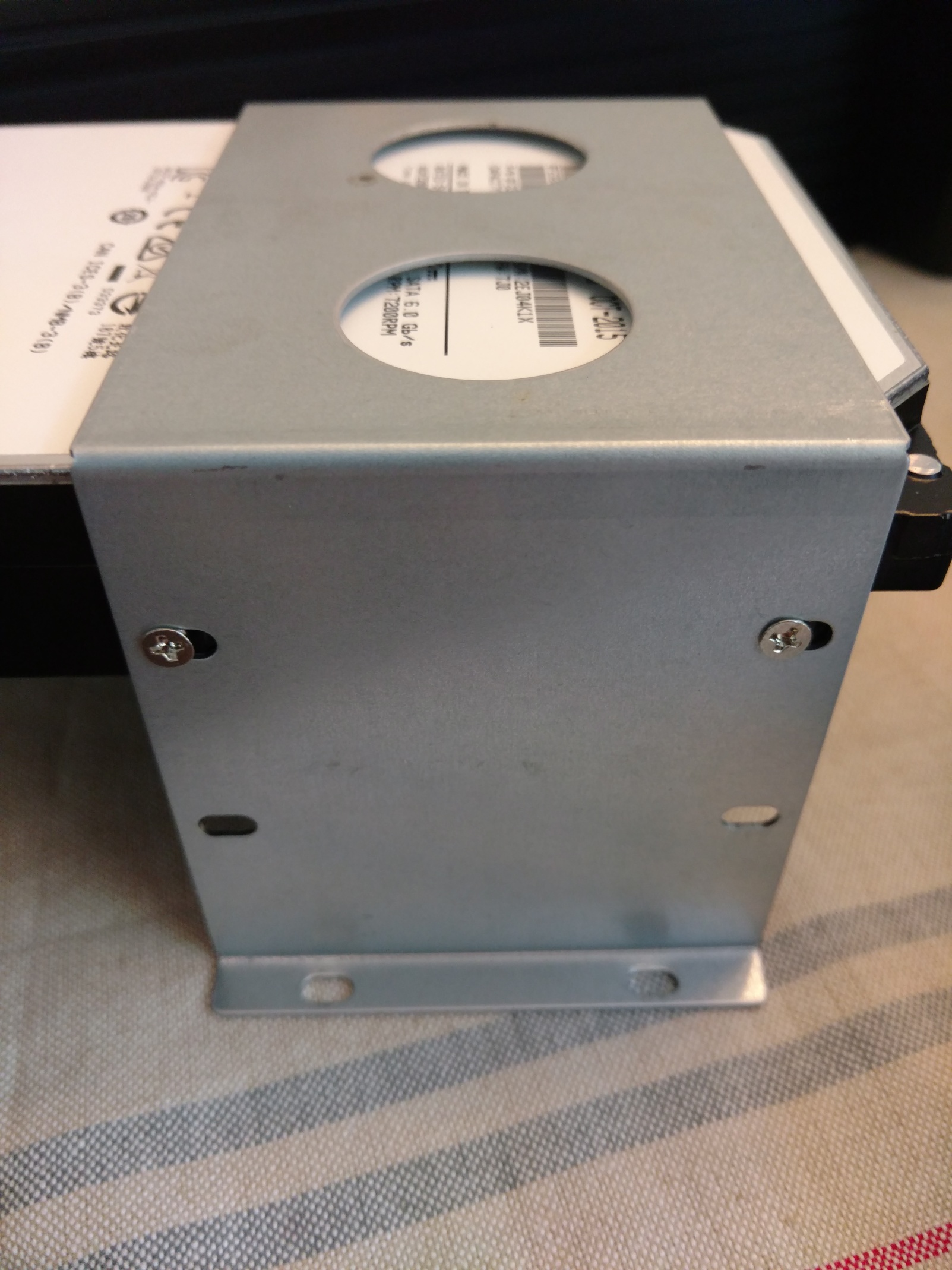 OK, enough rambling! Now for the pics of the (mostly) finished project. I can clean it up a bit more with some zip ties and shorter SATA cables. Even though temps are fine, I do want to get some higher airflow chassis 80mm fans. But for now, it looks halfway decent (or maybe my standards are declining). Certainly not neat, but there are little nooks in which to tuck cables. In case it's not obvious from the pics, I'm using an adapter in the 5.25 bay that supports up to four 2.5" drives. So, total specs for this build: 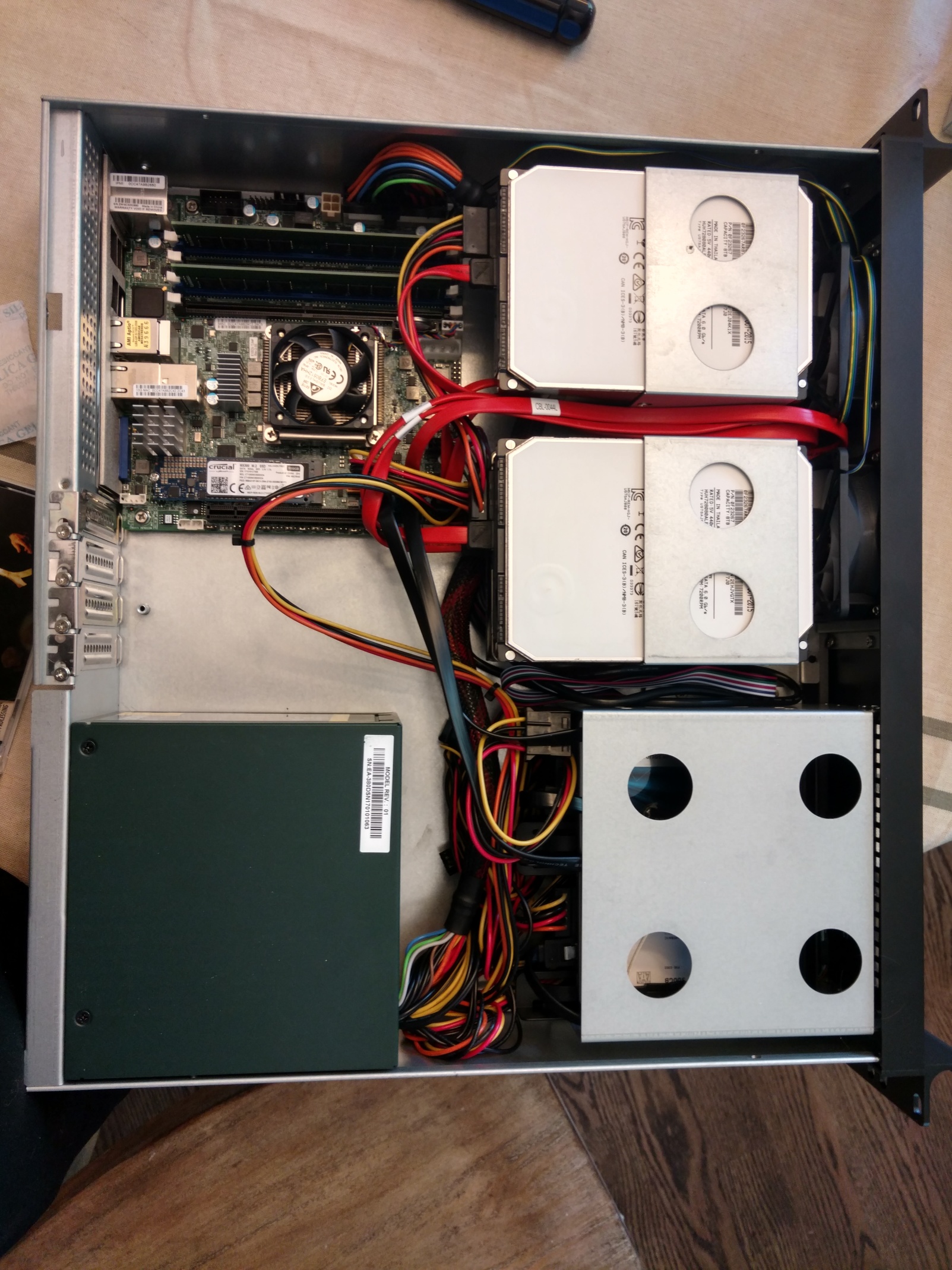 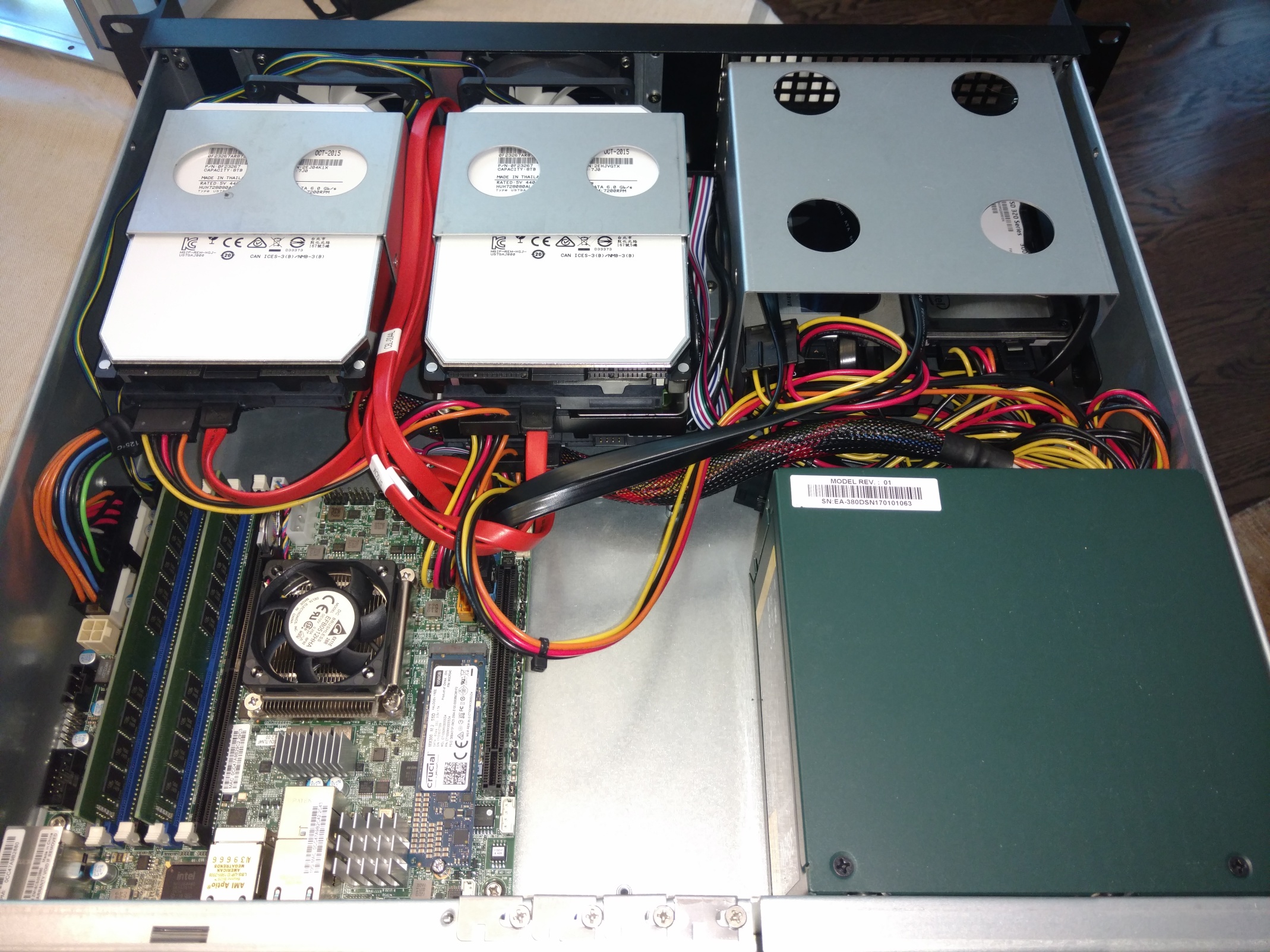 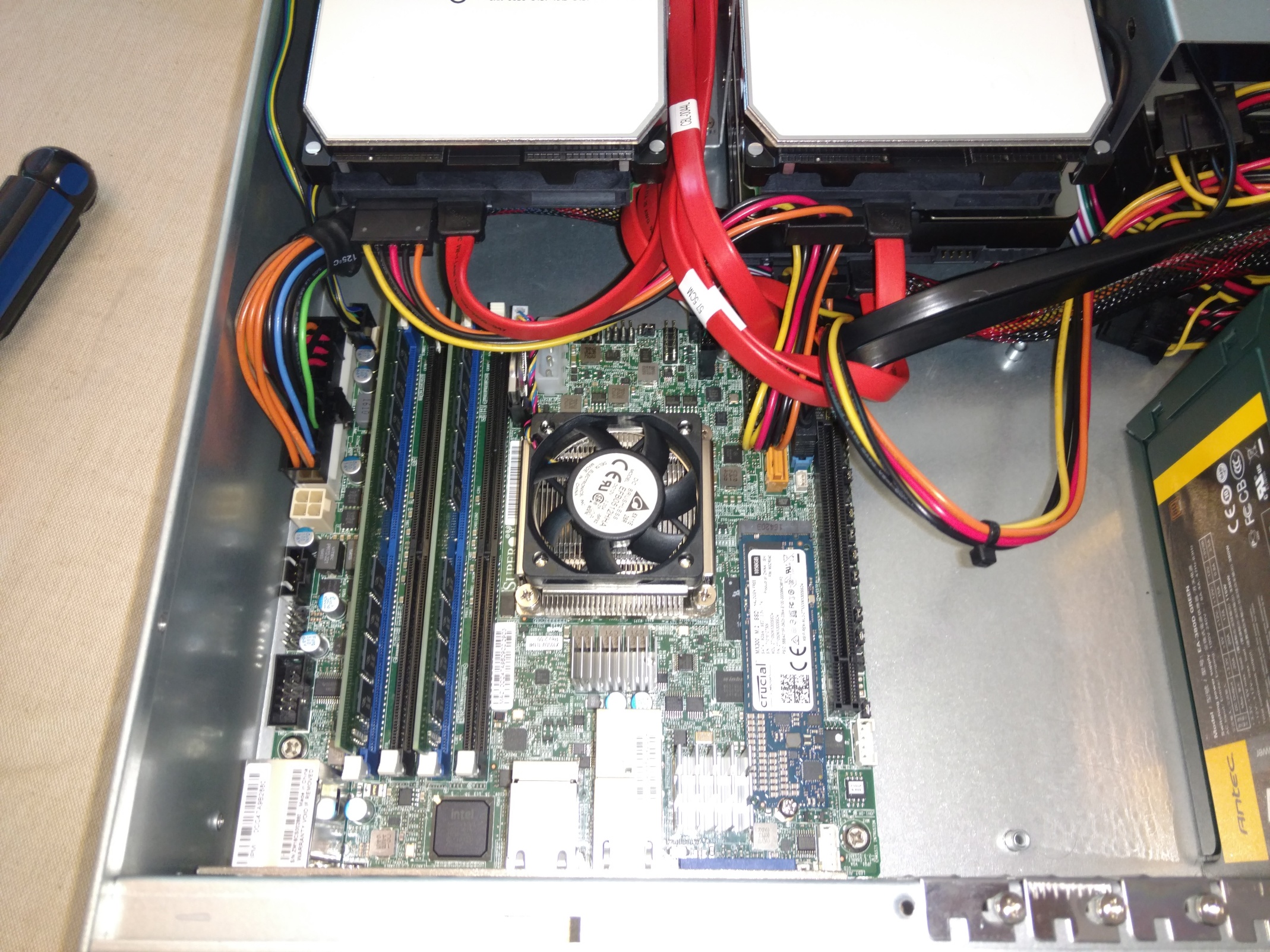 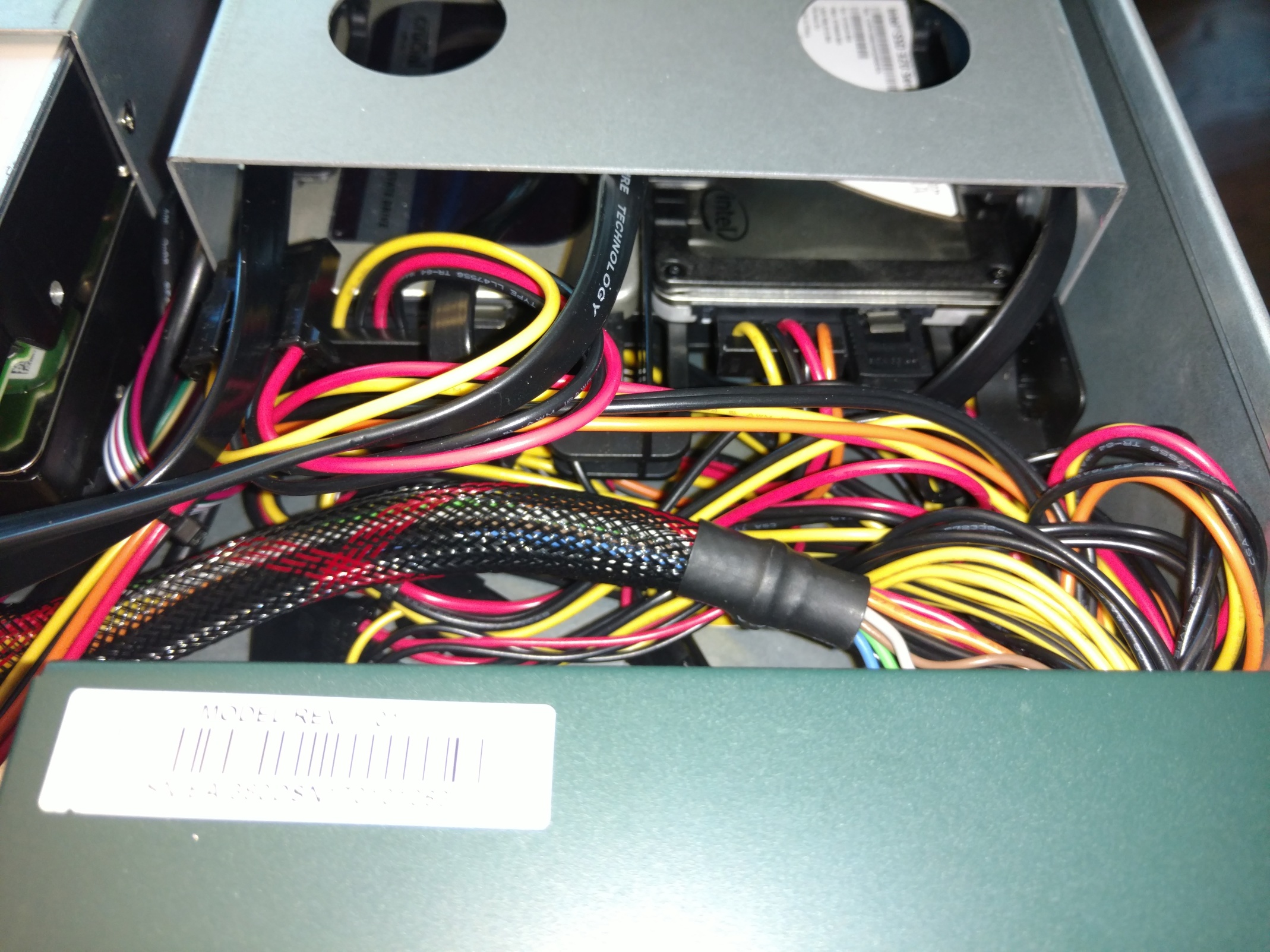 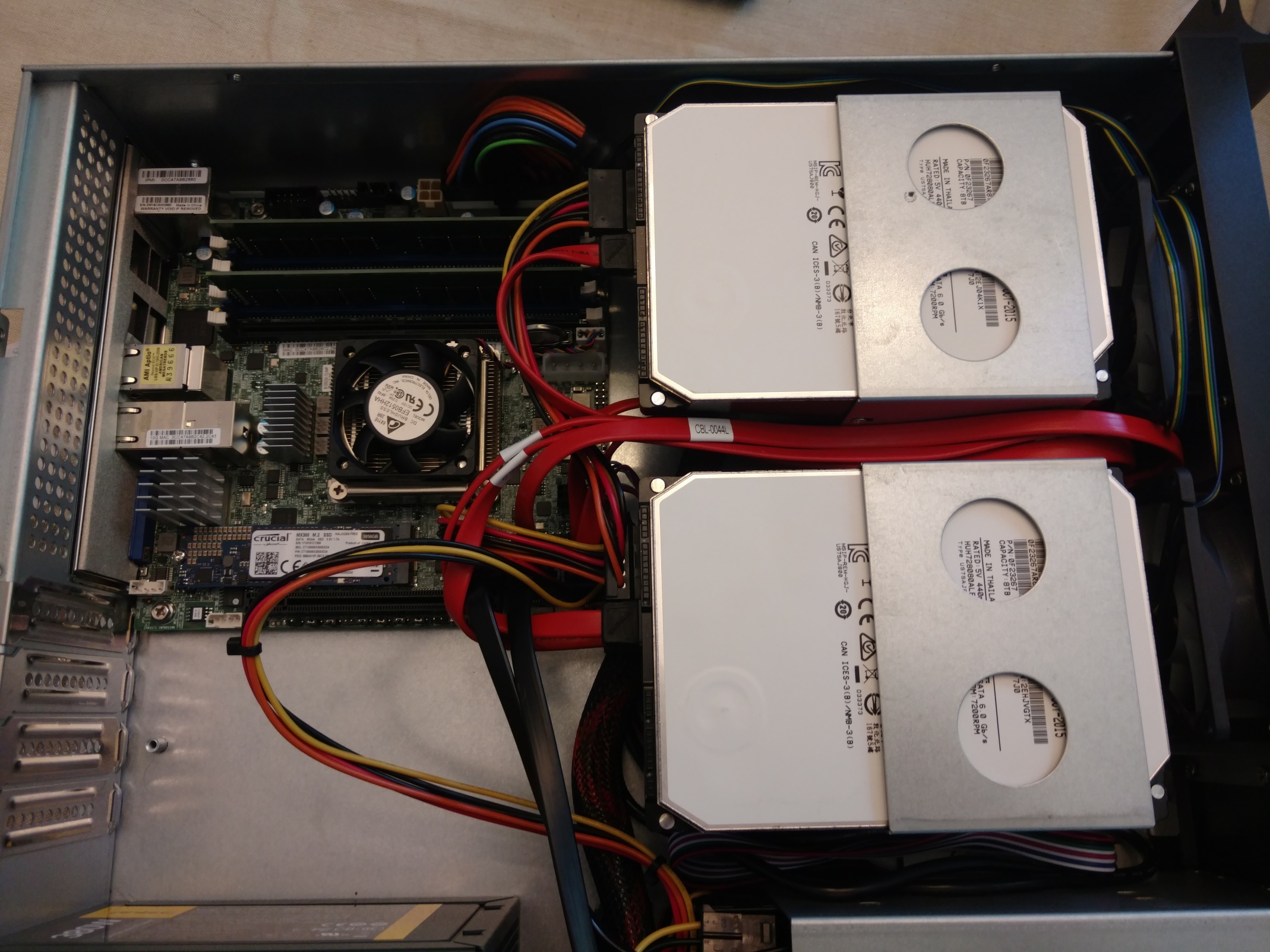 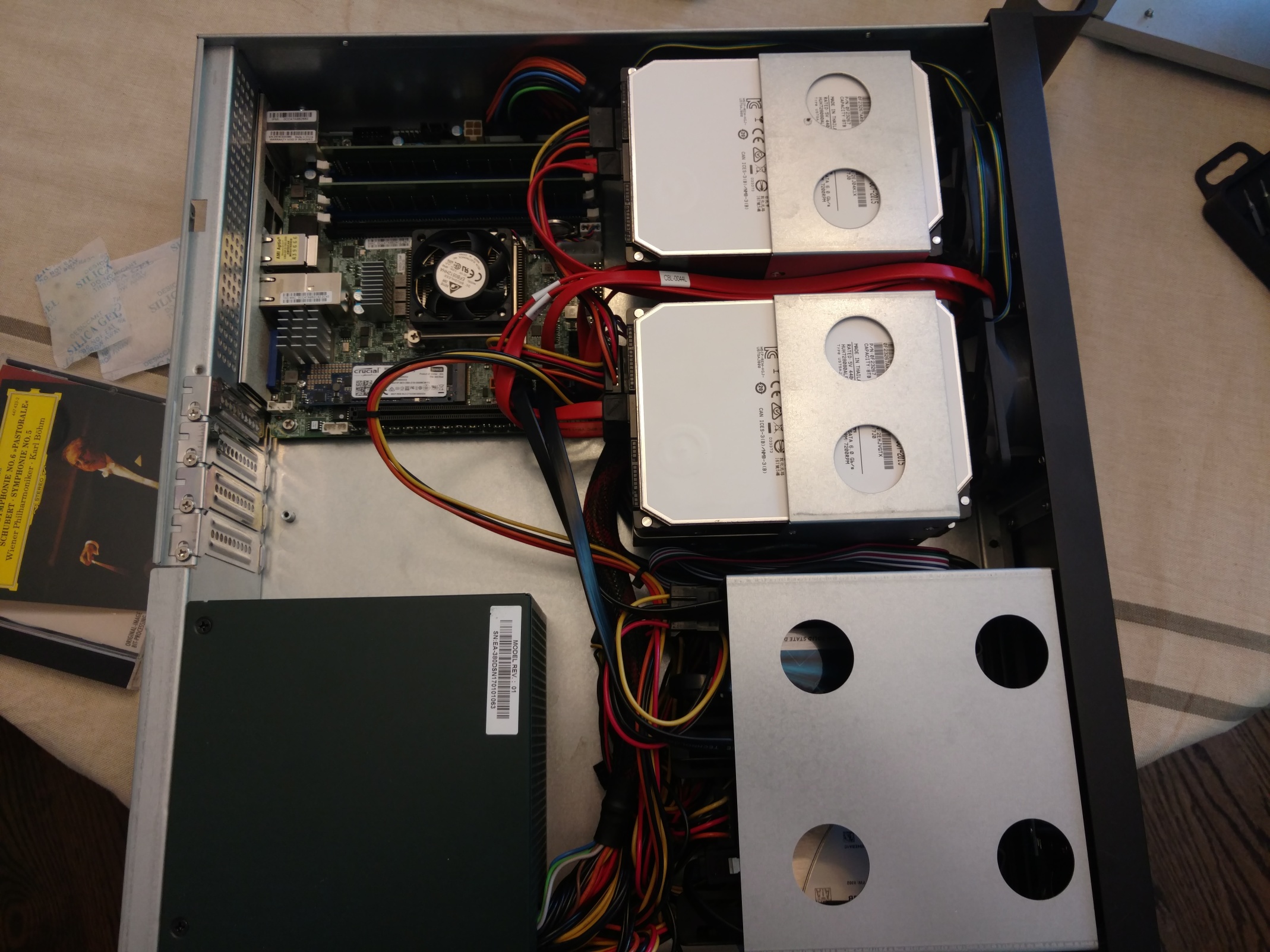 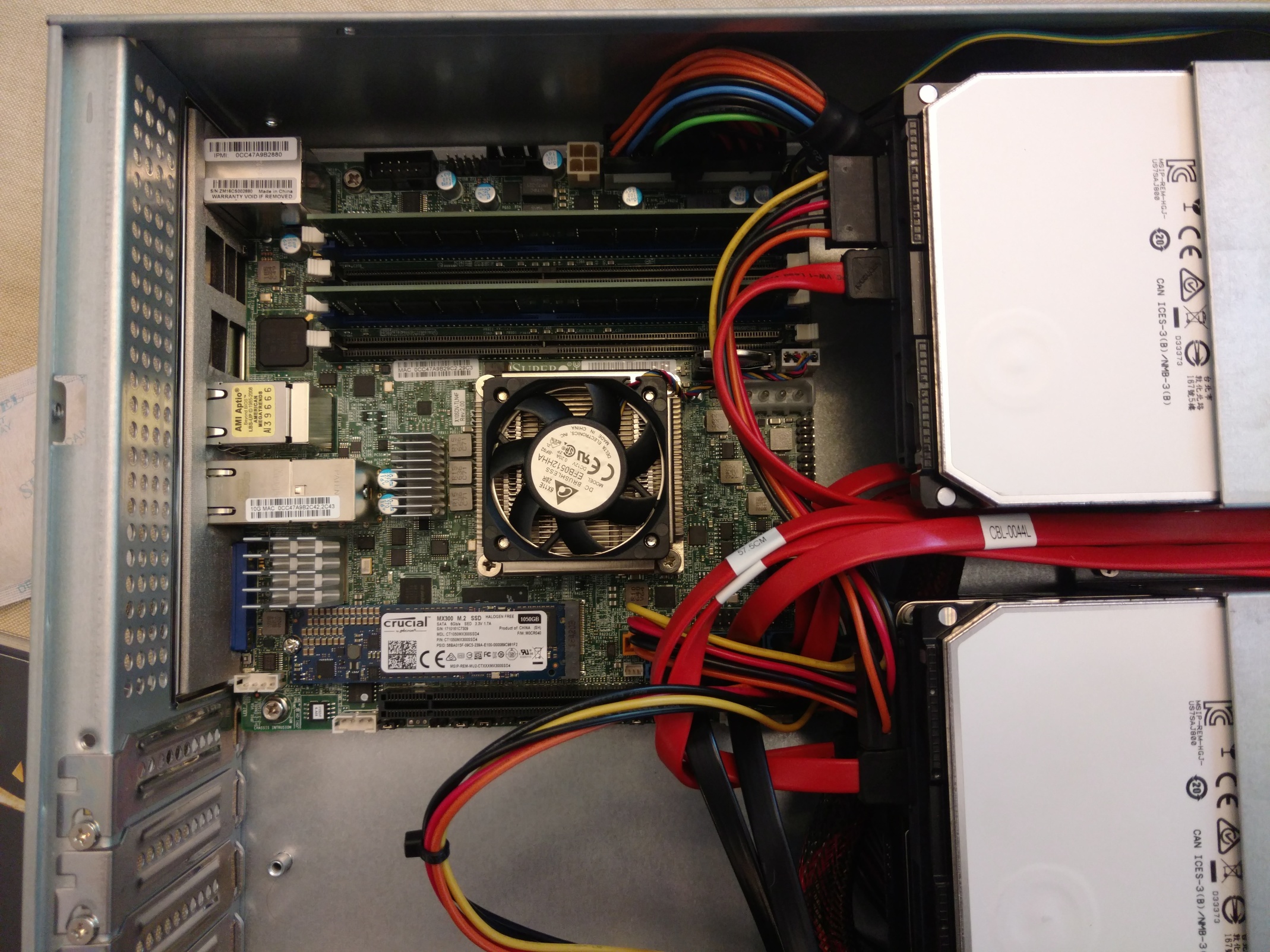 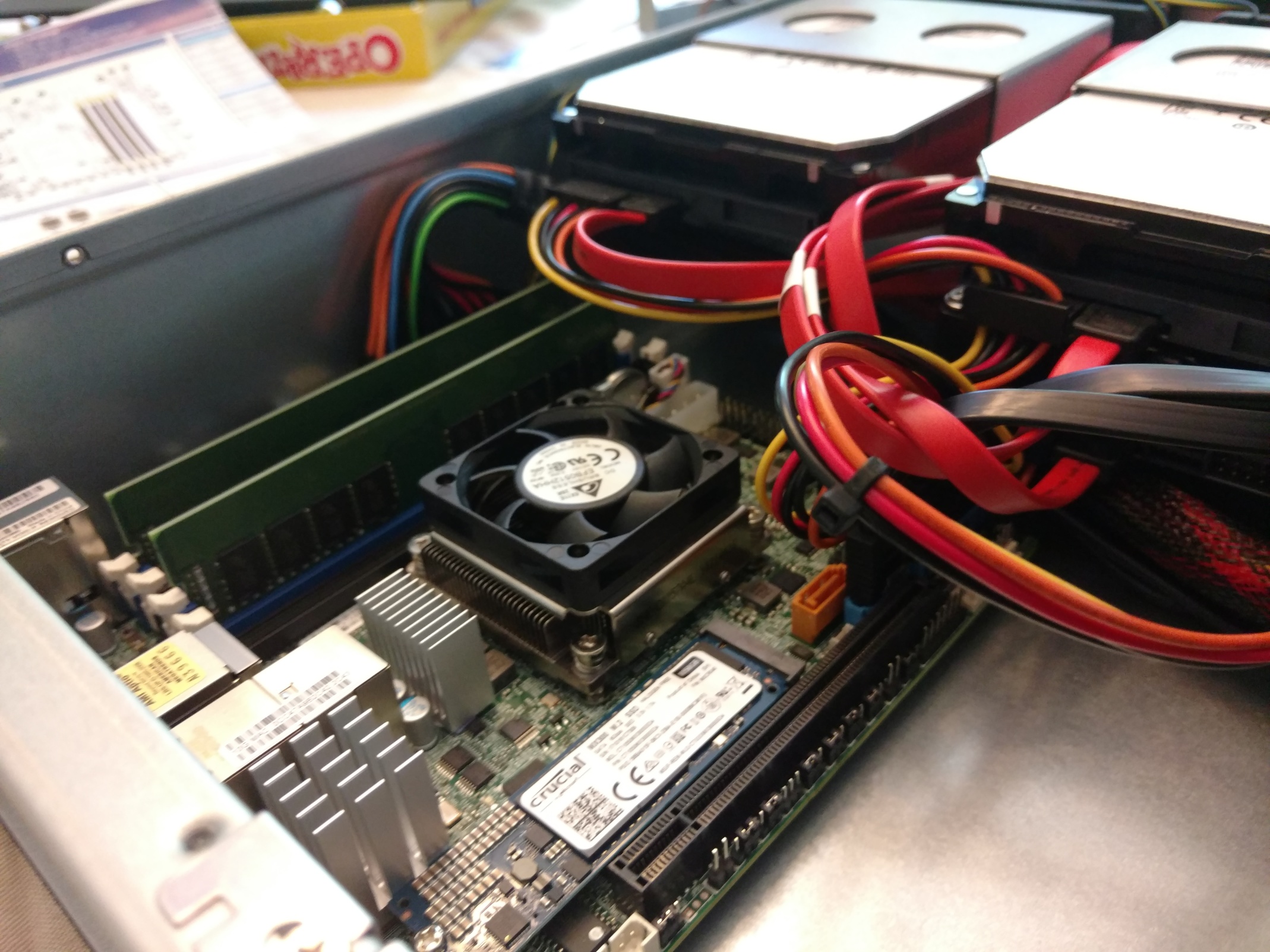 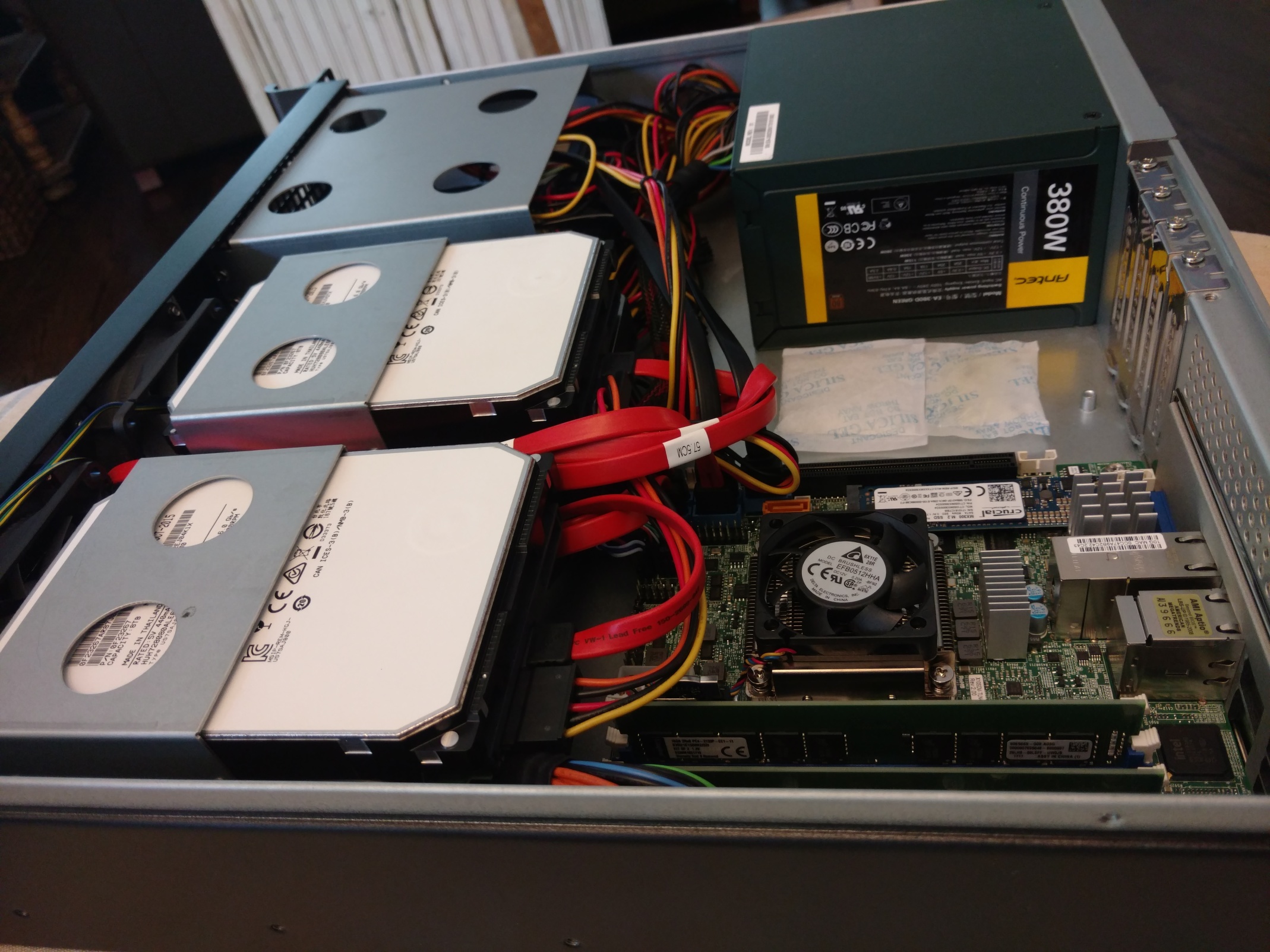 Very nice build. Should be a good little server for you.

Nice low power build. I'd be interested in hearing about zoneminder too. Currently have 2 UBNT cameras and use their software. Need to add 4 more and exploring other alternatives.
M

Regarding Zoneminder: love it. I almost didn't use it, because my initial web research turned up lots of posts where people made all kinds of complaints: hard to use, unstable, etc. But my experience has been quite the opposite. (Maybe older versions had issues?) I've had zero stability problems. I'm using the official RPMs for CentOS. I'd consider myself pretty handy with Linux, but ZM is definitely not the hardest thing I've ever done with Linux. At least the maintainer of the Redhat packages includes a README file that tells you want to do, step by step. As long as you're reasonably familiar with Linux and can follow instructions, I don't see how it can be so hard. I also read or at least skimmed most of the documentation. YMMV and all that, but for me, I have no complaints.

Well, one minor caveat: the system was designed back in the day when MPEG was the most common video format. So the system (currently) transforms the video stream (no matter what format) into a series of JPEG files. It stores the "video" as a sequence of JPG files and also uses those image files for analysis (motion detection, etc). It works, but it's not particularly CPU or storage efficient. But the developers are working to make ZM work natively with modern stream formats (e.g. h.264). My system is plenty powerful for my two (soon to be three) high-resolution cameras, and storage is cheap. So it's not an issue for me. But you won't be doing high FPS + high resolution motion detection on a Raspberry Pi.

In short, I think it's great, and only getting better.
Reactions: K D
E

The S-35 looked so small but then I compared it to the SM 721-TQ and I was surprised they are essentially same.
https://www.supermicro.com.tw/products/chassis/tower/721/SC721TQ-250B

I have that case with D-1540 currently and I was thinking to change to rack mount but I am not sure it's worth it as it looks like maybe I have the best small case around if a few drives are needed.
T

In case anyone else was also searching for that 2U, you might find the 'iStarUSA D-213-MATX' under the name 'Raidsonic RM-1920'. It looks exactly the same to anyway.
M

I couldn't leave it alone, so had to do some fan mods. First was to replace the case fans. Originally I had 2x Arctic F8 PWM fans. Those got changed out for Sanyo-Denki San Ace fans, part number 9GA0812P4H001. 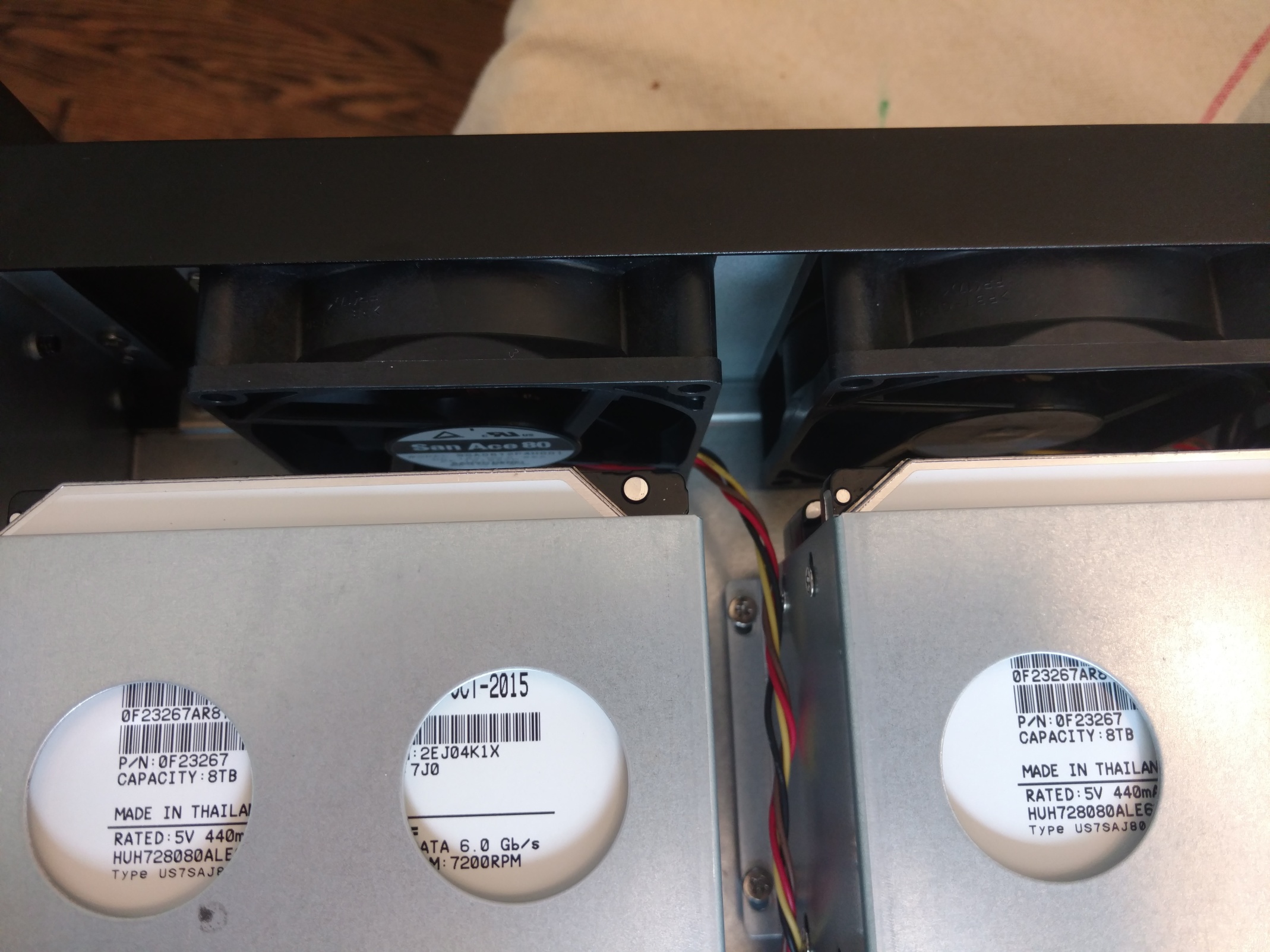 Next up was the CPU fan. I didn't want to go messing with the stock fan or heatsink, for fear of voiding my warranty or making things worse. Of course, I could possibly still be making things worse with what I did, but so far it seems OK. I just got another fan, and stacked it on top of the stock fan. I went with the same manufacturer and size. I used hot melt glue to attach them. Not a super-secure mounting method, but that plus gravity should keep it in place. It definitely will pull off if it needs to come off, and I can easily scrape away the glue with a razor blade.

Stock fan is Delta EFB0512HHA, and I added a Delta AFB0512VHD-F00. Here are the two fans side by side, before mounting: 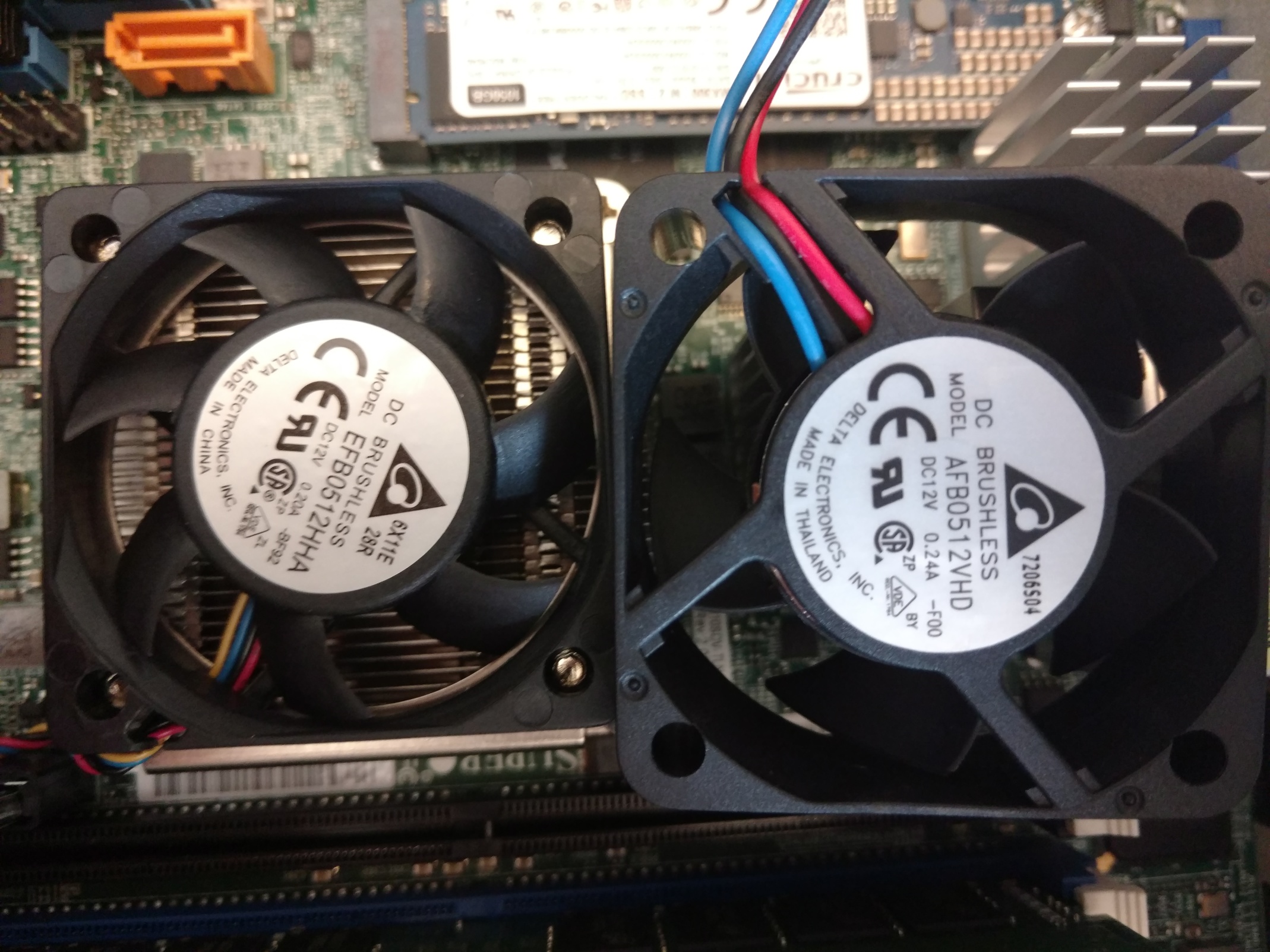 And the mounted "stack": 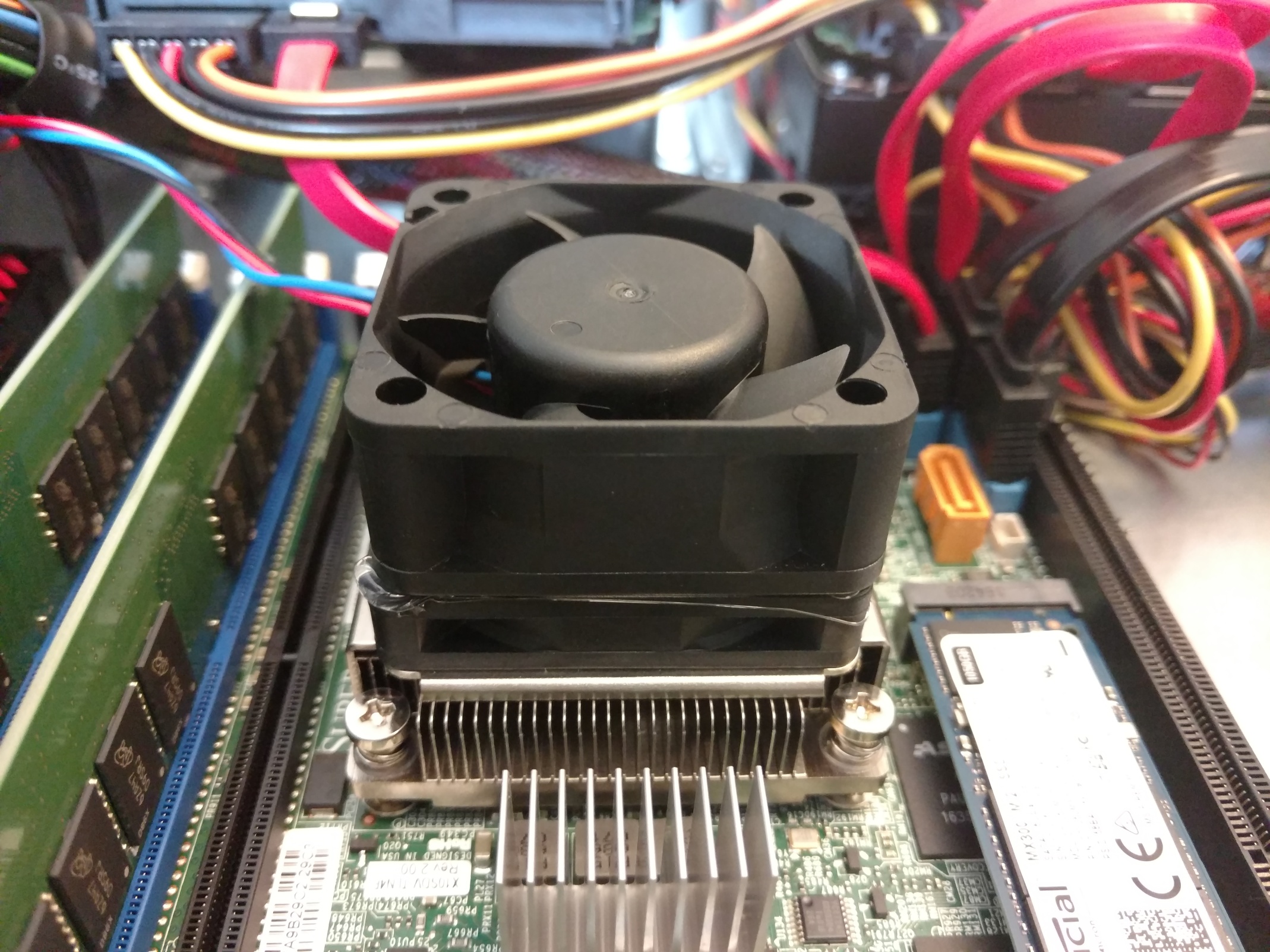 Lastly, I got some shorter SATA cables, which makes things a bit tidier: 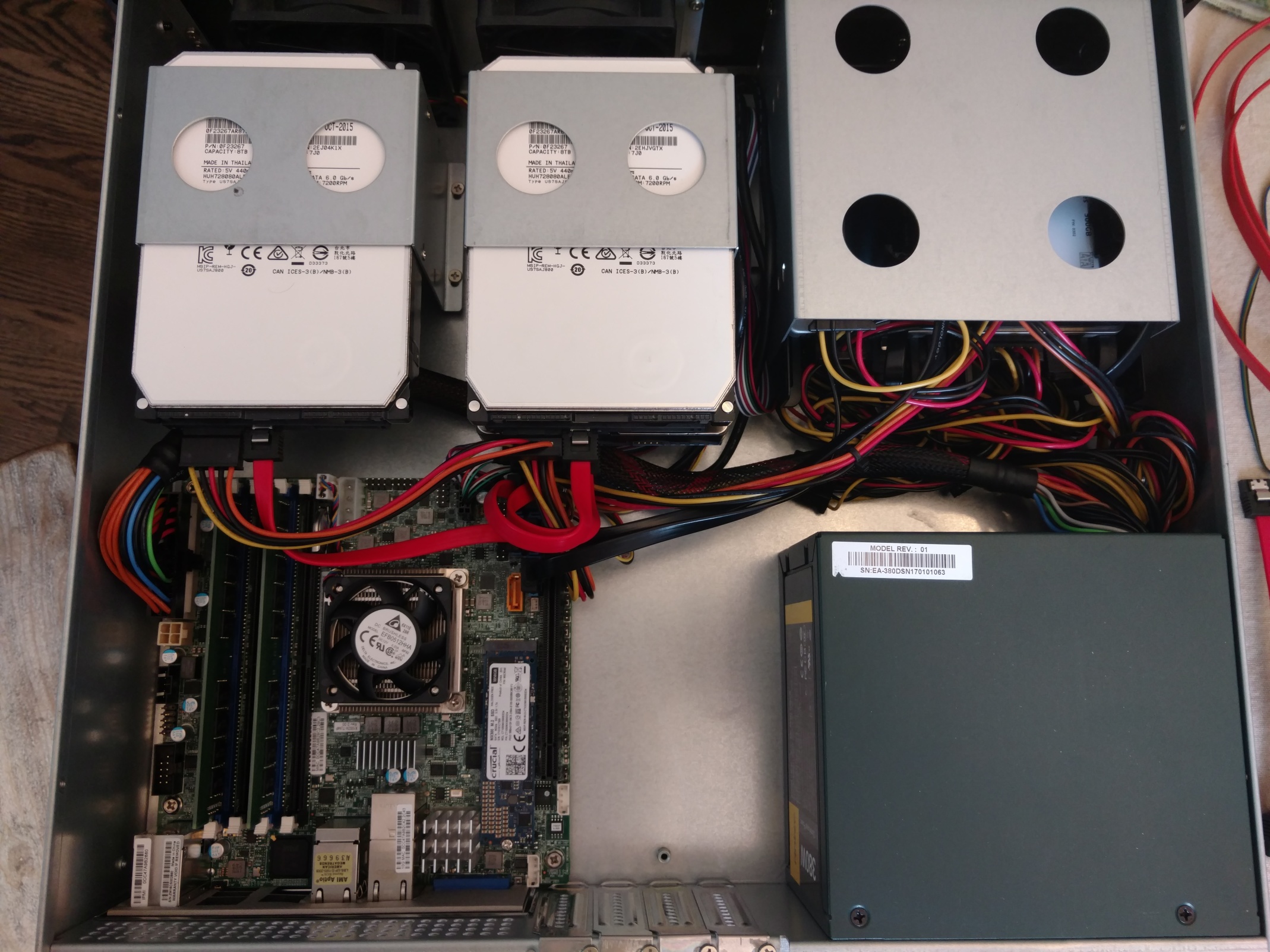 So far temperatures are indeed cooler.

At "semi-idle" state (mostly idle, except for Zoneminder, which does put a non-trivial load on the CPU):
Old CPU temps hovered around 43C
New CPU temps hover around 40C

Drive temps mostly went down a couple degrees, although a couple actually went up a couple degrees. They are well in the safe range, so not concerned about that. However, the M.2 SSD saw a big improvement: previously it typically lived around 55C, now it hangs around 46C.
Reactions: wsuff, Evan, T_Minus and 1 other person
Show hidden low quality content
You must log in or register to reply here.
Share:
Facebook Twitter Reddit Pinterest Tumblr WhatsApp Email Link
Top Bottom