EPYC Milan on Supermicro H11 board?

lopgok said:
I contacted Supermicro asking about Milan support for my H11SSL.
Here is their reply (from Apr :12 2021)

After checking with PM, unfortunately, we don't have plan to update the BIOS of the H11SSL to support Milan.
Sorry for the inconvenience!


Clearly not the answer I was hoping for. So I can update my Rome 16 core one day, but it will have to be a higher core Rome. I was hoping to update to a Milan processor.

Everytime I see these things, I always remember why I wrote this. The one that designs and sells Motherboards shouldn't be the one to give long term Firmware support, since they only profit from selling you new Motherboards, thus not wanting to support new things is a good justification to sell you a new Motherboard (Assuming that you want to buy from them again if you feel that they let you down).
L

I got another reply from supermicro:

Some supplementary information, here are two reasons why we cannot update the BIOS for H11 series MB to support Milan CPU.
1. Hardware structure restrictions: Even if using Rome CPU on the H11 series MBs, the HW only supports PCIe 3.0. So, we will recommend using Rome and Milan CPU on H12 MB for PCIe 4.0.
2. AMD doesn't provide AGESA code for Naples + Rome + Milan. Therefore, we cannot provide the BIOS for 3 generations of CPUs.

Point 1 is a non-answer. So what if the hardware only supports PCIe 3.0? Everyone running Rome already knows they are giving up on that. Wanting to move to Milan isnt just for PCIe 4.0, it’s for the IPC and clock speed improvements. If you have an H11 board, then you’re aware that you’re stuck with PCIe 3.0. And I think most people are totally fine with that and are mostly using this board for CPU work. It’s one of the only EATX Dual EPYC boards, and probably the only one we can get easily in the US.

Point two is such a cop out answer. No one is asking them to support all three. They’re trying to pass the blame to AMD. Just release the BIOS with only Rome/Milan support and literally no one would care. It’s the same thing that AMD and board vendors did for B450/X470 consumer boards to be able to support Ryzen 5000. All consumers know that the BIOS removes support for old processors and won’t have PCIe 4.0. I guarantee the number of people happy to get support far outweighs the people who might not like losing support of Ryzen 1000.

Please relay these points back to them.
L

I told them that I know my board only does PCIe 3.0, and I don't expect PCIe 4.0 on my board.
The other point *is* a cop-out. As you say, nobody who wants a Milan will care about Naples support. I hope enough people ask Supermicro, and then perhaps they will make a bios.
I did point out that only the H11 series have dual socket support, and that a lot of people will want dual socket Milan support. Personally I don't need it, but my needs are very modest.

Not planning in buying a H12SSL just to get Milan support...
Reactions: gsrcrxsi
T

If SuperMicro wants to make H11-DSi owners buy a new board that supports Milan, they could at least release a dual-socket EATX replacement. Offering neither a BIOS update for the old board nor selling an upgraded 2P EATX board will just drive sales to competitors.
L

I heard from a good source that they will be releasing a 2P EATX board for Milan.
I still want my H11SSL updated to support Milan.
T

lopgok said:
I heard from a good source that they will be releasing a 2P EATX board for Milan.
I still want my H11SSL updated to support Milan.
Click to expand...

The problem is that all those boards are typically unobtainium in the U.S., whereas SuperMicro seems to actually have distribution here. Oh well, Milan seems like a good generation to skip for us; our workload is memory bandwidth-limited, and Milan didn't increase memory bandwidth. Genoa will be on like Donkey Kong, though. Unfortunately DDR5 will cost an arm and a leg for at least 3 years after release.
E

press/info release? or actual release? can you buy it?

but looking at the board layout. at least the terrible vertical SAS ports are gone from this one. long GPUs wont fit anywhere but the bottom x16 slot on the H11DSi, not ideal airflow.
N

Where's all the lanes?

No mention of CPU TDP? Strange.

If it can't supply the full 280W the top-tier Milans support, then meh.
G

NablaSquaredG said:
Where's all the lanes?

not really. they squeezed in an entire extra x16 slot vs the H11DSi

on dual socket EPYC configurations. 64 lanes from EACH CPU are used for CPU<->CPU communications. so dual socket still only exposes 128 lanes total to peripheral devices. Some systems can be reconfigured to reduce CPU<->CPU lanes to expose up to 192 lanes, but I'm not sure this board can do that.

yeah, they could maybe squeeze some more lanes in to make it like 6x x16 slots, or a second m.2 port or something. but it's not egregious and there are probably other factors like board layout and the price point they are trying to hit.
Last edited: Apr 21, 2021
N

Oh interesting @gsrcrxsi - I missed the 4x NVMe Slots! Well that IS an improvement and was one of my main points of criticism of the H11DSi. Also the additional PCIe x16 is nice, but can only be used for NICs or NVMe HBAs...

NablaSquaredG said:
Oh interesting @gsrcrxsi - I missed the 4x NVMe Slots! Well that IS an improvement and was one of my main points of criticism of the H11DSi. Also the additional PCIe x16 is nice, but can only be used for NICs or NVMe HBAs...

It's nearly on par with the Gigabyte MZ72-HB0 now, except that the Gigabyte has 1 more NVMe Port (SlimSAS)
Click to expand...

why could it only be used for HBAs or NICs? there's nothing in the way for a full size device in the top PCIe slot (the USB3.0 FP header might get in the way with long cards, but you could use a right angle adapter). they squeezed the memory slots closer to the socket for more clearance vs the H11DSi. 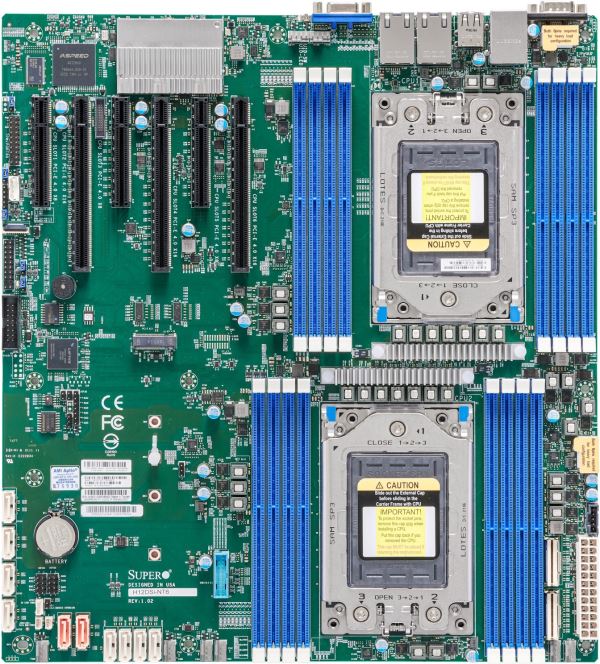 gsrcrxsi said:
they squeezed the memory slots closer to the socket for more clearance vs the H11DSi.
Click to expand...

Great, the upper-right DIMMs in our cluster's H11DSis already hit 80C (in a cold server room, with case fans on max).
N

gsrcrxsi said:
why could it only be used for HBAs or NICs? there's nothing in the way for a full size device in the top PCIe slot
Click to expand...

that seems something that is 1) use/chassis specific, 2) workaround by making a tighter shroud? there's certainly room for it if you don't need to consider your specific chassis restriction. another chassis will fit. not really a downside for the board specifically, just maybe wont work for you. but will work fine for others without your specific restriction.

I run my H11DSi with 2x7642 (@240W cTDP) in a SM CSE-743-1200B-SQ worstation case with SM 4U heat sinks and quiet fans. CPUs at full load run 60-70C without any ducting. memory temps are fine too (3200MHz). I can fit a shorter GPU (those stupid vertical SATA miniSAS connectors) in the top x8 slot right next to front memory slots. I did this when I had 2 GPUs in the system, but currently back down to just 1 so I'm using the top-most x16 slot now with a shorter GPU.

if the price of this H12DSi board is reasonable, I might consider upgrading since I could squeeze 3 GPUs in there now in the x16 slots.
U

looks like that's true. look at block diagram, i still see some 16 lanes free (circles in red are mine). what mean those black lines?