Was looking for new "big" hard drives and came across some of these on eBay for $150, which is a lot better of a deal than any of the brand-name drives, even used. I was hesitant at first because there's virtually no information out there about these drives whatsoever - Google searching the model number only turns up links to buy them and one obscure forum talking about 2TB versions and not 6.

Just for kicks, I sent an email to GoHardDrive asking if they knew what these drives were based on. Got a reply from them, see below: 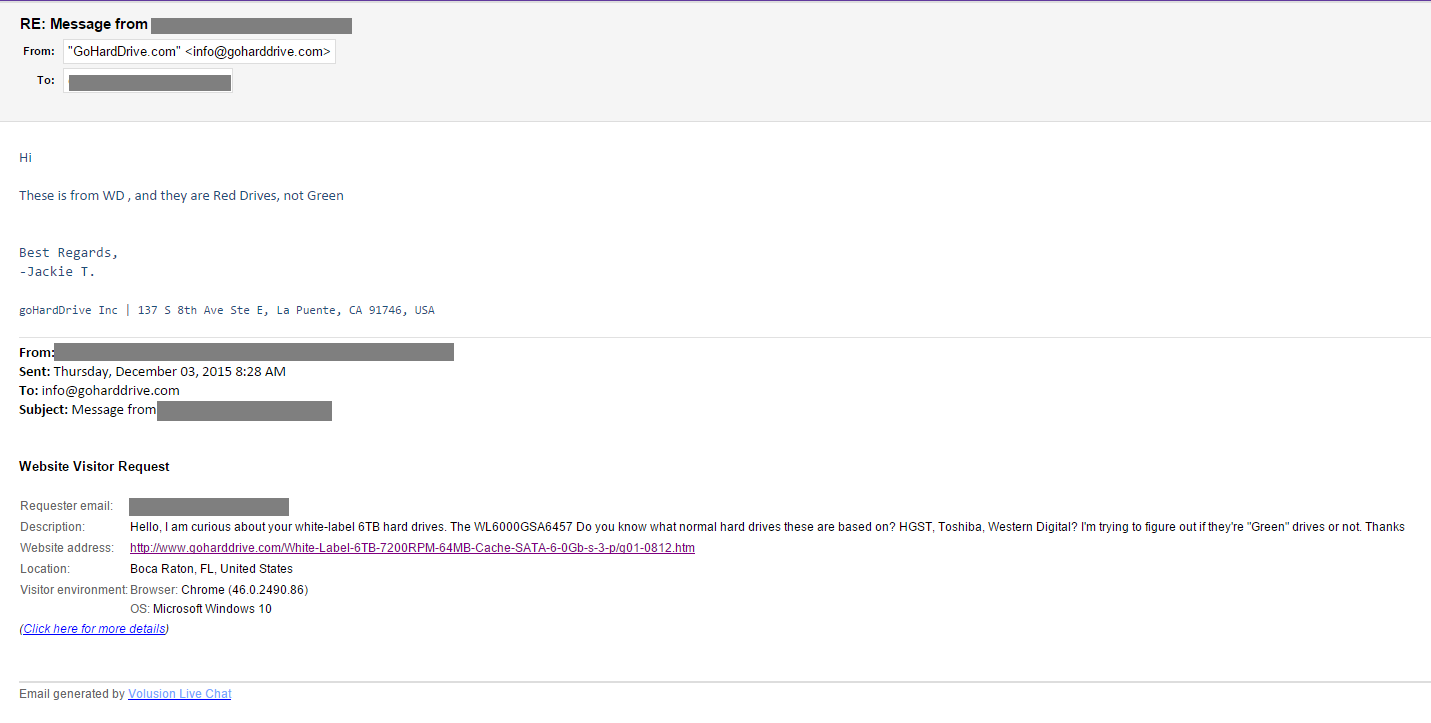 So, according to the people selling them, they're basically rebadged WD Red drives. The regular WD Red say IntelliPower, but it's totally possible they're around 5700RPM in actuality.

I'm going to buy a few of these, and I'll be happy to post some more information once I have them in my hands.

These are most likely binned drives off the production line or possibly surplus drives that are shipped to surveliance companies, etc. for use in their equipment.

Has anyone here bought any of these drives? Just mildly curious™.
S

Understand that the two sellers in the ebay links are in fact the same outfit?
D

OK, so an update - apethouse never did respond to my offers, I made two sets of offers and they just kept getting ignored. I read on the 4TB enterprise white label thread that they really never do respond, so once the second set of offers expired, I went ahead and bought them at the full price.

Yes, I knew they were both GoHardDrive.

I got all three drives today. Starting with one of them, as my SATA ports are all fully utilized so I have to upgrade one drive at a time. It doesn't have a DONTSHIP firmware, so that's nice. Doing a surface test in Hard Disk Sentinel, ETA about 18 hours - it's testing quite fast compared to what I've seen, well over 90MB/sec.

As someone pointed out in the 4TB thread, it does indeed look like they wiped the SMART data. It said times powered on: 2 (one was likely when I accidentally powered on my computer and shut it off quickly to plug in the rest of my cables) and all the rest of the information is zeroed out. So we can't really tell much from that.

Looking at the form factor of the drive, I can confirm it is indeed Western Digital - the question is just which one. I'd like to believe GoHardDrive when they say WD Red - how would you guys advise confirming or denying that?

By the way, one thing I thought was curious is that these ones are also branded as MediaMax, like the drives I bought a year or two ago. What is MediaMax anyway? I was told that white label is when the hard drive manufacturer (in this case, WD) makes them specially for a company to use in whatever - but I can't find any companies named MediaMax that would have a need for an enormous amount of hard drives. And for that matter, how come there are extra ones so quickly after 6TB drives have been on the market? I don't want to be suspicious as all of the hard drives I've bought from GoHardDrive have worked fine, just more of a curiosity than anything. If anyone can comment that would be great.

I'll post back once the surface testing is done and I format the drive as NTFS and take some benchmarks.

"Mediamax is an authorised Service Partner of Wester Digital. The Western Digital Hard Drives were professionally and generally repaired by Mediamax own brand and represented at the market. We are not dealing with No Name hard drives, but with generally repaired Western Digital HDD. Visually and technically HDDs looking like new, all HDDs aresealed in an antistatic tape."
Reactions: T_Minus
D

So basically they're like a refurbisher who puts their own name on the drives instead of Western Digital's, so they can sell them at a lower price?
D

This drive is fantastic, it's by far the fastest performing drive I own. See here: 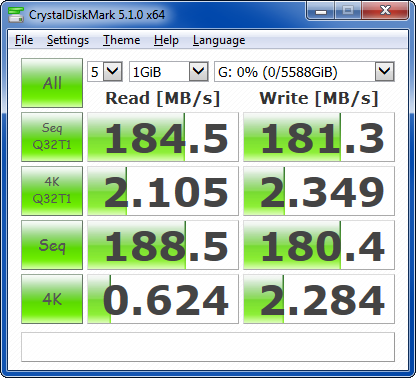 All the SMART data was at 0, but that likely means it was legitimately a new drive - no scratches or anything indicating it would have been used before.

If anyone wants any more info, let me know. But I'll say these are definitely worth a purchase - can't confirm that they are indeed WD Red but I've never seen a green drive go that fast, if that's any indication!

Edit: someone linked me to this thread on WD's forums, and if you look at the screenshot, you'll see it has that exact same firmware of 82.00A82. So I can pretty much confirm this is a WD Red drive, just with a MediaMax branded label. Pretty good deal!
Last edited: Dec 15, 2015
Reactions: Patrick, Chuckleb, croakz and 1 other person

So I bought four of these drives and ran badblocks on them. One failed directly out of the box. Writes worked fine but Reads failed constantly. I Contacted GoHardDrives as soon as it failed and they had me ship the drive back and they then shipped me a new one. Shipping was paid both ways.

The other 3 disks passed bad blocks with zero issues. The drive they sent me as a replacement underwent the same badblocks test and passed.

Average Time to run Bad Blocks was 50hrs.
Total Data Written per drive was 24.4TB
one drive finished 19 minutes earlier but I am unsure if that was the bridge or just that it had priority over the other ones. All disks were started at the same time.


So far I have only been running them on my SAN for a week but everything feels stable.
Reactions: Patrick

I picked up a bunch of 4TB from Go hard drive... all reds. flawless so far.
Reactions: Chuntzu
D

Picked up one of these 6TB drives, but the reported size is 6.10TB. This makes me believe it's actually a WD Ae drive meant for cold storage... As far as I can see only the Ae drives have this "progressive capacity".

Would you guys recommend swapping the drive? It's a bit problematic for me to do since I had a friend bring it over for me from the US and I live in Europe. It's not impossible though as he's in a (very) long distance relationship and they visit each other now and then.

I'm thinking of putting the drive in a three drive RAID-5 to upgrade my current RAID setup in my NAS, which is used mostly for media purposes. To be honest, it really doesn't see much use so I could well see the drive having a workload smaller than 60TB/year. And the 300,000 cycles still allows me to power the drive 10 times a day for 40 years if my napkin math is correct.

The drive has already survived a burn-in test with badblocks and long SMART tests before and after, and performance seems fine too. The sequential write speed is less than the 180MB/s drfsupercenter got, but for media storage purposes this really isn't that important for me. It would be limited by the gigabit ethernet anyway.

I have 2 of 5 drives with Smart Warnings after showing 4 days of usage. HD Sentinel shows health at 63% from original 100% when they arrive I have RMA both, waiting for resolution. I saw the new price at $200, too.

I received full refund for the two drives. Unfortunately, the same drives for purchase are now $50 higher for each one. Not worth it.

I realize this is grave-digging a bit, but one of my 3 WLs just had this same thing happen. One died within the 1 year, so I got a replacement sent to me by GoHardDrive - one that was actually a different firmware and looked slightly different.

And a second one died a few days ago in a similar fashion to yours. First it slowed down drastically to the point where it was unusable (like 50-60MB/sec continuous reads and writes), and when I tried to wipe the drive in DBAN it failed to verify. Tried it a second time, got the same result.

SMART data still shows 100%, no bad sectors, but I don't believe it at all. Given my suspicions about them wiping the SMART data before shipping anyway, the self-monitoring part of the hard drive probably doesn't even work anyway and falsely reports that it's healthy. Put it in a USB dock and it kept appearing and disappearing, like what you said - froze HDS when trying to surface test it. When the surface test DID eventually start it got to 10% in 20 seconds - obviously not correct... then it froze again.